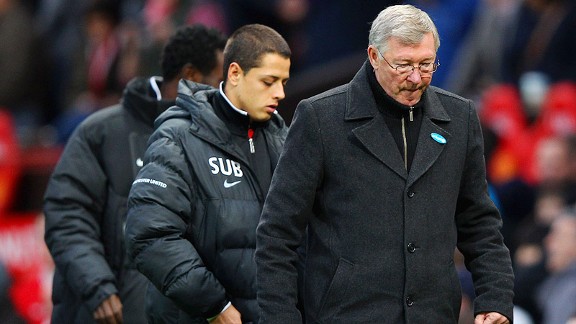 In the prematch telecast of Manchester United versus Blackburn Rovers, ESPN's Rebecca Lowe gave the audience a rare inside peek into the Red Devils' dressing room. Afterward, Ian Darke cracked wise about the conspicuous absence of the infamous "hair dryer." But you know that somewhere in the bowels of Old Trafford, the United players got theirs after Blackburn pulled off the most shocking win of the season, a 3-2 triumph on Sir Alex Ferguson's 70th birthday.

Blackburn's win was the club's second at Old Trafford in the past 49 years (the only other triumph coming in 2005).

This was bottom-of-the-table Blackburn -- 28-1 underdogs by some bookmakers, 33-1 by others -- a laughingstock of a team whose own fan base has harangued and harassed manager Steve Kean with placards, planes and vitriol from the stands at Ewood Park. (Any wonder that Blackburn plays better on the road?) This was also a team ravaged with injuries and forced to field a reserve keeper in Mark Bunn. Yet he -- along with the likes of Chris Samba, Grant Hanley and Adam Henley in defense, and Yakubu up top -- put in yeoman performances. Blackburn's fans may have given up on Kean, but they won't be calling for his head on this day. The manager's players defended well -- if they often parked the bus with 10 men behind the ball -- and pressurized United with energy and purpose when they were out of possession.

United is also dealing with a rash of missing players, including four center backs and Wayne Rooney, whom Ferguson said was coping with various muscle strains (though details remain vague). The Scot has had to mix and match, the proverbial square pegs in round holes, as players continue to play out of position -- a sort of a Total Football approach born not out of design but desperation. It's been quite remarkable that it hasn't tripped up Ferguson's side. Still, given the team's run of form -- five straight wins, scoring 17 goals and pulling level with Manchester City on points -- you had to think Ferguson was going to be popping the birthday bubbly long before the final whistle.

But it was a strange old game. Dimitar Berbatov pulled down Yakubu in the 16th minute in the penalty box, and Yak coolly put the ball into the left-hand side. In the 51st minute, he scored another out of almost nothing. It was a simple throw-in, and when Michael Carrick made a mess of trying to clear the ball, Yakubu was able to power past Phil Jones and bury the ball into the net again. 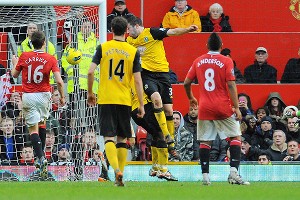 Andrew Yates/AFP/Getty ImagesAfter David de Gea failed to deal with a corner in the 80th minute, he found himself out of position while Grant Hanley powered home the game winner.

Berbatov would get two goals back. Morten Gamst Pedersen tried to be too clever in the clearing his lines and gave the ball away to Rafael, who mis-hit his shot, allowing Berbatov to head the ball into the net from close range. In the 61st minute, Antonio Valencia -- who had a much better game once Ferguson moved him to his normal spot on the right wing in the second half -- powered past Henley. He cut the ball back to Berbatov, who made the finish look much easier than it really was.

But it's the game's last goal that will be under the most scrutiny. It was a simple cross, and for the second time in the match, David de Gea was suspect. Fact is, the Spanish keeper might be extraordinary in his distribution; he might be like a cat with his reflexes (i.e., when he doesn't have to think). But throughout the season, he has appeared uncertain on corners and other times when he must come out into a scrum of players and fight for the ball. He lacks that physical presence -- the stomach for a fight and wanting to bully his way into a crowd -- to adequately defend the goalmouth.

De Gea flapped at a corner kick in the 33rd minute but was fortunate not to give away a goal. In the 80th minute, he wasn't so lucky. He flailed at the ball as he came off his line, and this time Hanley punished him for it, heading home what would become the game winner.

It's going to give Ferguson plenty to think about: Stick with de Gea or go back to using Anders Lindegaard. The Dane has kept clean sheets in the five Premier League games he's started this season, making 13 saves in the process. He's also looked more composed on corners. Yet Ferguson has been careful not to bench de Gea after shaky games in order to preserve his confidence, it would seem. But can he afford to keep doing that?

Don't miss a moment of the latest soccer coverage from around the world. Follow us on Twitter and stay informed. Join »

The unsightly goalkeeping left fans with an even stranger sight: Kean taking a triumphant walk on the sodden pitch, thanking his players and the away fans, who had nothing to complain about.

As for Ferguson, he will have to review a team performance in which his players got in the way of each other -- Javier Hernandez was all but in invisible in the first half until he got in the way of a goal-bound effort from Jones, and at the game's death Jones' shot was cleared off the line by William Keane -- prepare for Newcastle at St James' Park on Wednesday. He'll also be hoping for a belated birthday present: City dropping points tomorrow against Sunderland.

You are fully responsible for the content you post. Content that includes profanity, personal attacks or antisocial behavior (such as "spamming" or "trolling"), or other inappropriate content or material will be removed. We reserve the right to block any user who violates our terms of use, including removing all content posted by that user.