Editor's note: To mark 10 years of the Gilas Pilipinas program, ESPN5.com will be publishing a "Gilas series" with one article a day for the next 11 days. The following is a look into the events that surrounded Gilas Pilipinas under Tab Baldwin's watch.

In terms of what the team achieved, the first two iterations of Gilas Pilipinas that Filipino basketball fans first think of will either be the 2013 version that beat South Korea in the FIBA Asia Championship semifinals or the 2014 version that gave some of the best teams in the world a run for their money and scored the country's first victory in FIBA Basketball World Cup in four decades.

However, there will always be a special appreciation for the Tab Baldwin-led team. Beset with challenges from the very start, the 2015 Gilas Pilipinas battled the odds and reached heights few expected from them.

Baldwin's stint started late in 2014. However, as he started to build a team that would try to qualify for the 2016 Rio Olympics, he faced limitations on which players he could select. Most PBA teams only allowed a single player from their lineup, with some of the top picks declining due to injuries. 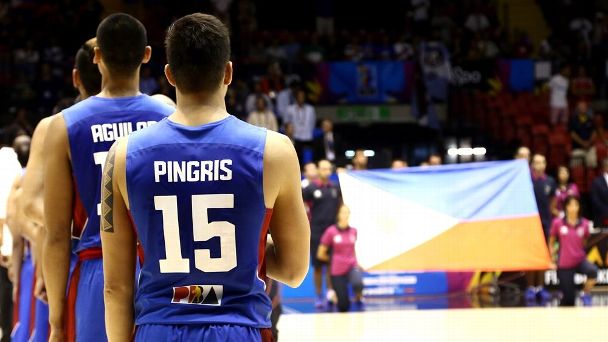 ESPN5.com celebrates 10 years of the Gilas Pilipinas program with features that highlight and examine the program's most notable milestones.

• Timeline of the national team program
• Gilas' formative years under Toroman
• When Gilas ended the Korean curse
• The highs and lows of Gilas in 2014
• Golden silver: Gilas under Baldwin
• Building up for two World Cups
• Jordan Clarkson and the Gilastopainters
• How Gilas qualified for 2019 World Cup
• 0-5: Gilas' winless 2019 World Cup stint
• Moments that have defined Gilas

As a result, Baldwin could not build the team oozing with talent so he decided to run with players who were fully committed and take it from there. It started with a few holdovers from the World Cup squad: Jayson Castro, Gabe Norwood, Gary David, and an injured Ranidel De Ocampo. Another World Cup player in Marc Pingris was able to join the team later on.

The other challenge for Baldwin was that Andray Blatche did not have the same conditioning that he had for the World Cup.

Their first trip was to Europe where they played against Estonia, The Netherlands, and Iceland. Gilas was clobbered in all three games but, from the ashes of that campaign, Baldwin started to mold the team to his liking. As the losses piled up, the players figured out that they wouldn't be able to pull this off on talent alone. If they were to be successful, they would have to figure out how to be a great team.

Turning of the tide in Taiwan

What defined this team was how they collectively rose to the challenge. After Blatche needed to go back to the United States days away from their stint in the 2015 Jones Cup, all members of the team were forced to do more.

Romeo announced his arrival in their very first game and dazzled against the home team, Chinese Taipei. Jordan Clarkson, who came to support the team, danced to the music that was being made by the shoes of Romeo's defenders as they tried and failed to stay in front of him.

Although they suffered losses to powerhouse teams in South Korea and Iran, Gilas picked up inspired wins in the tournament, including a bloody battle against Russia and a come-from-behind overtime thriller against New Zealand, which was enough to get them the silver medal. In their eight games there, Gilas Pilipinas had six different leading scorers, which showed how dangerous the team was starting to become.

The calm before the storm

Samahang Basketbol ng Pilipinas chairman Manny V. Pangilinan put out all the stops to give the team their best chance to qualify for the Olympics by staging the second MVP Cup at the Smart-Araneta Coliseum. The tournament included the Wellington Saints, Chinese Taipei, and PBA team Talk 'N Text.

Gilas Pilipinas swept their games to win the tournament, but they had to survive a tough game against the Saints where they came from behind to pick up the victory.

For their last stretch of preparation, Gilas Pilipinas had a training camp in Cebu. Baldwin wanted block out any distractions as they amped up their practices. It was eat, train, sleep for the team aside from a couple of times they got to enjoy the sights that the Queen City of the South had to offer.

Their practices there were brutal. Three-hour sessions that most of the time ran long. Endless repetitions of plays and defensive sets with one general theme: the formation of a game plan against Iran as Baldwin knew that the best chance of the Philippines to make it to Rio was to play China only in the gold medal match.

Gilas Pilipinas was raring to get the action going when they arrived in Changsha, China but what met them was a brutal and shocking welcome from lower-ranked Palestine, which scored a 75-73 victory. The team could have crashed and burned after that defeat but Baldwin calmed everyone after the loss.

He told the team that the loss changed nothing, and that their path remains the same. If they beat all of their group stage opponents, including Iran, then the loss to Palestine won't mean a thing.

Gilas then took care of business against Hong Kong and Kuwait before moving forward to the next group stage where they defeated Japan before meeting Iran. It was during that game that the players finally understood why they spent hours upon hours running the plays of the Asian powerhouse. Baldwin prepared his squad so well that everything Iran did, they had a counter for. It was the signature win for Gilas in China as they picked up a huge win against an Iranian team which had their mainstays Samad Nikkah Bahrami and Hamed Haddadi.

Lebanon and Japan were tough challenges in the knockout round, but they could not stop the rampaging Gilas squad who set up a match against the host team in the gold-medal match with a ticket to Rio up for grabs.

Gilas Pilipinas battled as well as they could, even with the odds stacked against them, but they fell short. For the second straight edition of the FIBA Asia Championship, Gilas Pilipinas once again brought home the silver medal. The big difference, though, was that this team was not supposed to but did anyway.

The dust was barely settled from the loss to China when the planning for the next step began. The silver medal finish was enough to buy Gilas Pilipinas a spot in the FIBA Olympic Qualifying Tournament (OQT). However, for MVP, joining it was not enough. To help the team and to give Filipino fans a chance to see world-class basketball, the SBP decided to host the event.

After the inspired performance by the Gilas teams before, some of the big names rejoined the team for the FIBA OQT. Pingris, Norwood, Castro, De Ocampo, Romeo, Rosario, and Blatche were still there but backup arrived in June Mar Fajardo, Japeth Aguilar, and Jeff Chan. Also included in the squad were Ryan Reyes and Ray Parks, Jr.

The team trained in Greece for two weeks before joining a pocket tournament in Italy. They lost to the host team and Turkey before picking up a win against China. There were cuts as well as Abueva and LA Tenorio were left out of the lineup.

Gilas started like a house on fire against France as they were buoyed by a loud crowd that was eager to cheer them on. However, the French squad, led by Tony Parker, was simply too good. They not only had talented individuals, some of whom played in the NBA, but it was clear that their chemistry was much better.

The Olympic hopes of Gilas were dashed in their very next game as they fell to New Zealand, which also ended Baldwin's stint as the lead tactician for the national team.