In the 45-year history of the PBA, a Grand Slam - one team winning all three conferences in a single season - has only been accomplished five times, with Crispa winning in 1976 and 1983, San Miguel in 1989, Alaska in 1996 and San Mig Coffee in 2014. For our latest series, we interviewed one player from each of those Grand Slam teams. We started with the 1976 Redmanizers, followed it up with 1983 squad, and moved on to the 1989 San Miguel Beermen. Let's now look at the 1996 Alaska Milkmen.

The Alaska franchise was at the peak of their powers in the 1990's, with PBA greats such as Johnny Abarrientos, Jojo Lastimosa, Bong Hawkins, and Jeff Cariaso leading the way. Under the guidance of head coach Tim Cone, Alaska reached the zenith of their achievements as a franchise with a dominant run towards a Grand Slam in the 1996 PBA season.

The Milkmen didn't just claim trophies, they also set the record for most number of wins for Grand Slam clinching sides with 51 victories in 72 games played, just one more than San Miguel's 50-win campaign in 1989. The players also racked up the individual honors with Abarrientos claimed the MVP award and was part of the mythical and all defensive teams. Hawkins and Lastimosa joined the 'Flying A' in the mythical team, while Cariaso was named to the mythical second and all defensive teams.

The Alaska Milkmen were loaded with talent and made five consecutive finals appearances going into the '96 season, but still had a lot to prove. The Milkmen were nursing a lot of heartache from the 1995 season, making the Finals in the All-Filipino and Commissioner's Cups but falling to the Sunkist Orange Juicers on both occasions. Prior to '96, Tim Cone had yet to win a championship without the help of prized import Sean Chambers, and the Alaska franchise had never won an All-Filipino conference.

According to Cariaso, who was on his second year in the league during the 1996 season, everything had to fall into place for Alaska to reach the promised land.

"Things had to really line up, you know when they say the stars line up?" Cariaso said. "The level of play had to really be perfect. You're challenged every day, you're mentally challenged."

"Think about the third conference, by the time you get to Game 4 or 5 of the Finals, you probably would have already played 11 months that year. So that's really a challenge all in itself," Cariaso, who is now the head coach of the Alaska franchise, added.

Alaska had a springboard of sorts in 1995 after they claimed a morale-boosting Governors' Cup triumph to end the season on a high note. It was one thing to ride on the momentum of a championship going into the next season, but what kept it going for the Milkmen was an unbreakable mindset to grab the win night in and night out.

"Think about how mentally strong the team was. From the previous year, losing two, finding the way to make the Finals again that third conference and really not letting anything stop us to win our first championship. And then going into that '96 season, to win the first one, the second one, and then eventually give yourself a chance by making the Finals again in the third," Cariaso said.

"Imagine the focus. Imagine how mentally strong the guys were, how together we were," he continued. "Then you look at it from the point of view of a coach, how well they prepared us, how well they kept us kind of even keeled all the time. Not too high, not too low. Just know when and how hard to push us during practice. Really just preparing us well."

"It's pretty amazing when you think about the mindset of the guys during that time," Cariaso told ESPN5. 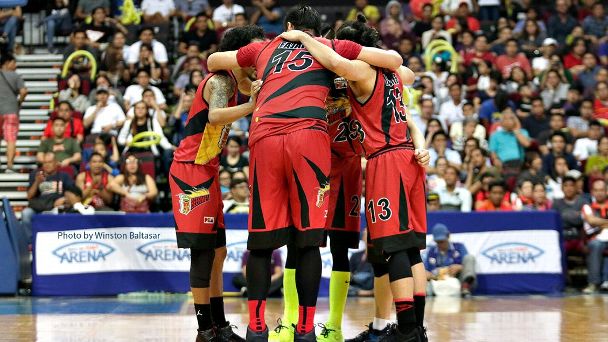 Alaska's mindset was put to test early in their Grand Slam campaign, with the Milkmen having to best Ginebra in a win-or-go-home game to even make it to the All-Filipino Cup Finals. After topping the standings with a 10-4 slate at the end of the eliminations, Alaska floundered in the semifinal round. There was no stopping Alaska though as they drubbed Ginebra 96-83 to secure their place in the Finals.

In the Finals, the Milkmen edged Purefoods 4-1 to claim their first-ever All-Filipino crown. The first and last games were nail-biters that boiled down to free throws in the dying moments. In Game 1 Purefoods almost overturned an 18-point Alaska lead, but fell short at the last moment when forward Rey Evangelista missed a free throw that could have sent the game into overtime. Alaska earned their All-Filipino crown in dramatic circumstances, with the Milkmen leading the series 3-1, and it was up to Cariaso to seal the deal with a pair of pressure packed free throws. The Jet earned the charities after drawing a foul in midair from Bong Ravena with six-tenths of a second left in overtime. Despite the pressure of the moment, which included fans being warned to stay off the court, Cariaso coolly slotted in both free throws for the 93-92 victory and the championship.

"That was all right," Cariaso said with a chuckle. "That was something I will never forget."

The Commissioner's Cup saw Alaska run roughshod over the league in the eliminations and semifinals, with the Milkmen ending the then-round robin semifinal round with a cumulative 14-4 slate. Alaska went into the Finals against underdog Shell, but had a disadvantage in a key position. The Milkmen's import Derrick Hamilton was banned by the league during the semifinal round due to a failed drug test. Alaska resorted to calling in resident import Sean Chambers, who was four inches shorter than Shell reinforcement and that conference's Best Import award winner Kenny Redfield.

The mismatch in terms of the imports' sizes was enough for Cariaso to worry about their chances in the Finals against a hungry Shell squad.

"We were lucky Sean was available and was willing to come in," Cariaso recalled. "Again, you're going against someone who was at least four or five inches taller than Sean in Kenny Redfield, an experienced import, a do-it-all import."

"I was a little worried in the Finals against them because we were smaller. It really took everything out of us to squeak that one out against Shell," Cariaso said.

The Alaska-Shell Commissioner's Cup Finals took seven games to settle, in what was the longest Finals series in the Milkmen's Grand Slam triumph. Alaska had the chance to wrap up the championship in Game 6 at the Cuneta Astrodome, but then an almost miraculous heave from Richie Ticzon in the game's waning moments forced a decider. In Game 7, Alaska held a ten-point cushion in the final quarter, but Redfield propelled Shell into a 10-0 run that negated that advantage with a little over two minutes left to play. Finals MVP Hawkins and Lastimosa duly answered back with a pair of jumpers that pushed Alaska ahead for good.

With two championships under their belt going into the Governors' Cup, the thought of a possible Grand Slam started to loom over the Milkmen. Suddenly the chance to cop the league's third ever Grand Slam in its then 22-year history was now knocking on Alaska's doorstep.

"The thought of it at least happening did not come into our minds until we won our second one against Shell," Cariaso said. "When you win two you start to read it in the papers, you start to hear about it from the press. So it's there, it's a thought."

According to Cariaso, the team never had a meeting that explicitly talked about winning the Grand Slam. But that didn't mean they wasn't going for it.

"To have a sit-down, a conversation? It wasn't like that," Cariaso said. "It's kind of one of the things we didn't need to talk about, we knew that it was there, the opportunity was there, and we just kind of went after it."

Despite all the hype, Alaska's Governors' Cup campaign did not start the way they envisioned. Four games into the elimination round, the Milkmen's lethargic start saw them fall to a 1-3 win-loss record. Then as if Alaska remembered how good they actually are, the Milkmen flipped the proverbial switch and turned into a juggernaut anew in the fifth game of that conference.

"Something happened just that fifth game, where we kind of stepped on the gas," Cariaso said. "We kind of looked at each other, and I am sure coach Tim got on us and did his thing in waking us up. I am sure he pushed us harder in practice. Then guys in the locker room just looking at each other and saying 'hey, you know we're better than this.'"

The victims of Alaska's epiphany were the Purefoods Corned Beef Cowboys on October 15 at the Cuneta Astrodome. The Milkmen mauled Purefoods 97-86, with Alaska at one point holding a 67-31 advantage in the third quarter. The victory was the start of a 13-game win streak that extended all the way into the Finals.

"We won 13 in a row from that point, that just helped us with our confidence and momentum just carried us," Cariaso said. "One or two more losses early, that could have been a different story."

Alaska finished the elimination round with an 8-3 record, before sweeping Shell in the semifinals in three games. The Milkmen faced off against crowd darlings Ginebra in the Finals, and handled them in five games. It took a one-point victory in Game 4 for Ginebra to avoid a sweep and end Alaska's 13-game unbeaten run. Still, there was no stopping the Milkmen from claiming the Governors' Cup and securing the Grand Slam.

Twenty-four years after the triumph, Cariaso looks back on that season fondly. According to the Jet, looking back at their achievements after all this time made him realize how much luck and mental strength played a factor.

"A lot of it, I'd like to say, is a little bit of luck. Because when you think about it, health is really wealth. We were pretty much healthy that Grand Slam year," Cariaso said. "It's really just the desire, and I think the desire of the guys, knowing that we should have won more than one the previous year, but of course credit to Sunkist they are a talented team also, but just that opportunity and just us missing out on that two opportunities the previous year it really made us stronger to be honest with you."

So what does it take to win a Grand Slam? It takes talent, great coaching, and luck, but Cariaso adds that the mental fortitude of the team plays a big role as well. For Cariaso, the '96 Alaska Milkmen's hunger and addiction to winning played a big part in their success, and helped propel them to dizzying heights.

"I think that's why we're also considered, under my eyes, a special team because we weren't tired of continuing to strive," Cariaso said. "We just stayed focused and the guys just wanted to win. When you get that taste of winning, you kind of want to keep it for as long as you can."

"I think that Grand Slam year was really our year, and everything just lined up perfectly."