The new league year hasn't even begun and the AFC South already has had an eventful week.

NFL Nation reporters Sarah Barshop (Texans), Turron Davenport (Titans), Mike Wells (Colts) and Michael DiRocco (Jaguars) reveal their favorite and least favorite moves of the past few days for the other teams in the division -- moves that set the stage for 2020 in the division.

Barshop: The Colts paid a steep price (No. 13 pick) to trade for Buckner, but there’s no doubt it strengthens the team’s front seven that already includes pass-rusher Justin Houston and linebacker Darius Leonard. Buckner has missed only one game in four NFL seasons. Indianapolis had the money to spend and clearly felt Buckner’s high price tag was worth the cost. 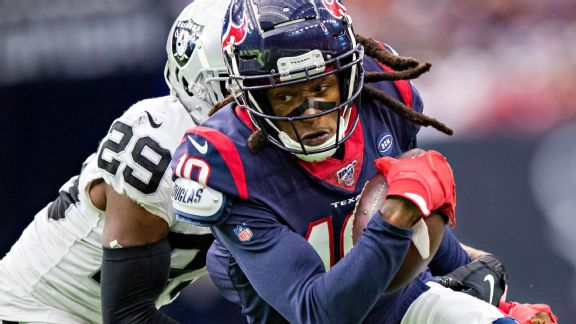 Davenport: The Colts added one of the most destructive interior defensive linemen in the NFL when they picked up Buckner. General manager Chris Ballard said at the combine that a top-tier 3-tech will drive their defense, so it's clear they got their man. Indianapolis had plenty of cap space to absorb Buckner's high price tag.

Wells: The Titans had to use the franchise tag on Henry. They couldn't risk losing him in free agency. Quarterback Ryan Tannehill got the big contract after he replaced Marcus Mariota as the starter and led the Titans to the AFC Championship Game last season. But it was Henry who helped lighten the load on Tannehill's right arm. Henry's 1,540 rushing yards led the NFL, and it forced defenses to respect the running game, which helped open up the Titans' passing game. Tennessee, especially with the trade of DeAndre Hopkins in Houston, would be looked at as the favorite in the AFC South if the season started today.

DiRocco: Ballard beefed up the OL, and now he's doing the same to the defensive line by adding Buckner. The price might be a little high (13th overall pick as part of the trade), but Buckner is a durable (just one game missed in four seasons) and disruptive player who can play inside and outside. To win the division, you have to handle Deshaun Watson and Henry, and Buckner is a player who can help the Colts do both. That defense just got significantly better.

Why the Texans trading Hopkins is a hefty gamble

Louis Riddick analyzes the Texans' trade of DeAndre Hopkins to the Cardinals in exchange for David Johnson and a second-round pick.

Barshop: The Jaguars sold low on Campbell by trading him to the Ravens for a 2020 fifth-round pick. Clearly, Jacksonville has decided to shed salary and rebuild rather than win now, but they are losing a stud defensive player who had 31.5 sacks in 48 games and made three Pro Bowls in three years.

Davenport: Texans coach Bill O'Brien managed to trade away one of the top three wide receivers in the NFL and took on a contract that the Cardinals were desperately trying to unload in Johnson. Hopkins is gone, and Arizona didn't have to give up a first-round pick or one of its young receivers to get him. That's mind-boggling.

Wells: Is Texans CEO Cal McNair sure he wants O'Brien to also have the general manager title? O'Brien basically gave away Hopkins for a bag of Doritos. O'Brien couldn't even get the Cardinals to give up a first-round pick for Hopkins. Johnson is next in line to join the revolving door of running backs for the Texans. And to make it worse, Johnson has topped 1,000-yards rushing only once -- in 2016 -- in five seasons in the NFL. And Hopkins? He has had at least 1,165 yards receiving in five of his seven seasons in the NFL.

DiRocco: O'Brien traded away one of the league's best receivers over the past decade for a running back that hasn't been close to the same player since he missed all but one game in 2017 with a wrist injury. Johnson is a good receiver out of the backfield, but he ran for just 345 yards last season and has totaled four fewer TDs from scrimmage in the past three seasons than he had in 2016. Hopkins was a first-team All-Pro the past three seasons and was uber productive for the first part of his career despite below-average QB play. Everyone raves about Michael Thomas, Julio Jones, Amari Cooper and Mike Evans, but Hopkins has done it better and longer. Terrible move by the Texans.