'Proof is in the salad': Ravens' D.J. Fluker cuts body fat in half
236dJamison Hensley
Ravens cornerback Marlon Humphrey tests his speed against his best friend -- his dog Ali
7dJamison Hensley
When will Ravens' Lamar Jackson cash in? Tackling issues for next big QB contract
9dJamison Hensley
Watkins: Lamar can be elite if receivers get open
10dJamison Hensley
Hilton: Gave up a lot of money to return to Colts
14d
Can UCLA Bruins follow others who limped into the postseason only to win it all?
13dESPN Stats & Information
NFL's 17-game schedule: Opponents for all 32 teams
16dNFL Nation
The $114 million question: Who's the next Ravens' pass-rusher? Clowney? Houston? Ingram?
17dJamison Hensley
Baltimore Ravens' NFL free-agent signings 2021: Finally a receiver -- Watkins signs for one year
20dJamison Hensley
Ravens add Watkins as hunt for receiver ends
20dJamison Hensley
From JuJu to T.Y.: Are free agent receivers bypassing the Ravens' offense?
21dJamison Hensley
Aug 22, 2020

Before his first training camp with the Ravens, Fluker used increased workouts and reduced-calorie meals to cut his body fat in half, going from 44% to 22%. His hope is all of this hard work will help him become the answer to the biggest question facing Baltimore: Who's replacing eight-time Pro Bowl guard Marshal Yanda?

Fantasy Football is Free on ESPN

More people play on ESPN than anywhere else. Join or create a league in the No. 1 Fantasy Football game! Sign up for free >>

Fluker is the favorite to win the Ravens' top training camp battle, but he knows starting for an eighth NFL season has to be earned. Seven years removed from being the No. 11 overall pick in the draft, Fluker received all the motivation he needed when he signed a one-year, $1.075 million prove-it deal that included just $25,000 guaranteed (a speck compared to the $6.6 million signing bonus he cashed in as a rookie).

Fluker's offseason workouts lasted from five to eight hours. In late July, he posted a one-minute workout montage video on Instagram (see below) -- with background music, slow motion and neon lights -- that showed him sprinting and side shuffling up a mall parking garage ramp in 95-degree heat.

His diet became eight balanced meals that resulted in him dropping his shirt size from 4XL to 2XL. It also led him to write on social media what should be his personal mantra this year: "Proof is in the salad, not the pudding."

"I was just trying to get down, get leaner, get more explosive," Fluker said. "Basically, come in at my best shape, and I think I've done a great job with that."

Fluker is exactly the type of big-body interior blocker who fits a run-it-down-your-throat offense like the one used by Baltimore. But team officials hadn't seen him face-to-face until the start of training camp a few weeks ago, which was three months after they signed him.

No days off even when I'm on the road in Yonkers NY. This morning was 15x80 yard incline hill sprints in 95 degrees with humidity and 10x60 yard side shuffles with hot steps. @jrice_personaltraining is trying to kill me for real now. But I went from a 4x shirt to a 2x shirt proof is in the salad not the pudding.

"When I met him, it was like an eclipse on top of me," said Steve Saunders, the Ravens' head strength and conditioning coach.

Former Ravens safety Eric Weddle, who was teammates with Fluker in San Diego, described him as a "big teddy bear" who is always smiling in the locker room and is a hard worker. Weddle said Fluker can be slow-footed as a pass protector, but he moves defenders off the ball in run blocking.

"There's no reason why he shouldn't succeed and have a great year with the Ravens," Weddle said. "What he does best is what the Ravens do best, and that's run the ball."

Body transformation has become a theme with the Ravens this year, from Yanda losing 60 pounds in retirement to wide receiver Marquise "Hollywood" Brown bulking up 23 pounds. 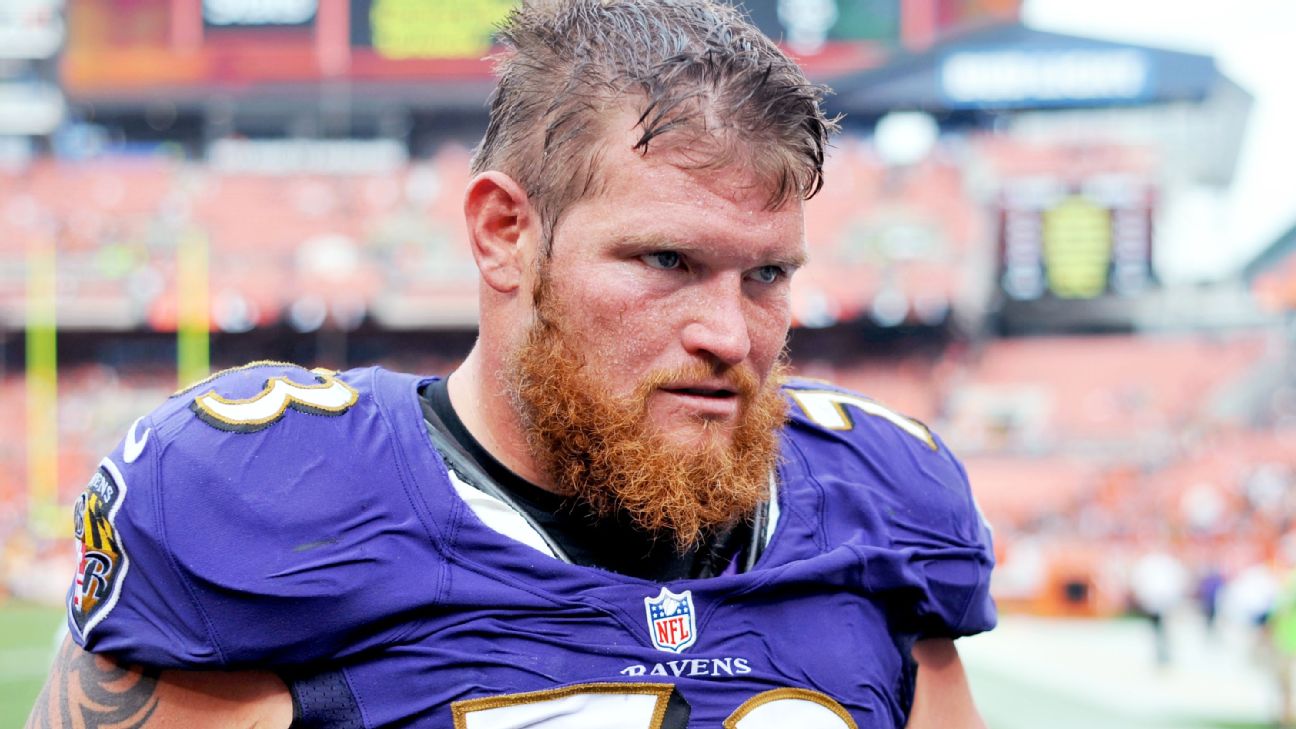 Weight has always been a popular subject with Fluker, who graduated from Alabama in 3½ years with a degree in health studies. At the 2013 NFL combine, Fluker was the heaviest offensive lineman at 339 pounds despite shedding 16 pounds since the Senior Bowl.

"He has looked excellent. [He's] moving very well," Ravens coach John Harbaugh said of Fluker. "This is a big guy, and it's all muscle, as you guys know. His attitude has been excellent. His work ethic, we had heard it was good, and I would say it's been better than good. It's been an A, A-plus. So everything's thumbs-up with D.J.”

While Fluker casts a big shadow, the one left by Yanda looms larger. When Yanda retired in March, he walked away from the game as one of three guards in NFL history to earn eight Pro Bowl selections and win a Super Bowl, joining Larry Allen and Alan Faneca.

"Yanda is a Hall of Famer. You can’t replace that guy," Fluker said. "Those are big shoes to fill, but I'm just going to be myself, come in and do what I do best -- and that's just play football. That's me: hungry, ready to go and win a championship and a Super Bowl and that's it.”

When asked how the Ravens would replace him, Yanda talked earlier this offseason about "the Raven Way," which is drafting middle-round offensive linemen and hoping to hit on some. Baltimore selected two offensive linemen in this year's draft, taking Tyre Phillips in the third round and Ben Bredeson in the fourth.

Still, the Ravens jumped to strike a deal with Fluker on April 28, one day after the Seahawks cut him. It is believed Fluker would become the first first-round pick to start at guard for the Ravens since Ben Grubbs in 2011.

"The guy wants to do the very best that he can, no matter the situation," said starting left guard Bradley Bozeman, who first met Fluker at an Alabama football camp when he was in high school. "He's got a lot of energy. He brings the fire."

• Hackenberg: A pick the Jets would like to forget
• No first-rounder? No problem for Rams
• Washington would trade up for right QB
• Vikings' Michael Pierce eyes 2021 return
• New coach, position excites Jaguars' Josh Allen

Fluker is the expected replacement for Yanda because of his starting experience and his familiarity with Ravens offensive line coach Joe D'Alessandris. But Pro Football Focus hasn't ranked Fluker higher than 45th among guards the past four seasons.

The primary competition right now for Fluker is Ben Powers, Parker Ehinger and the two rookies, Phillips and Bredeson. But Fluker believes he has already won one battle by the way he feels after a laborious past few months.

"You've got to have sweet feet to go on the field and play offensive line," Fluker said. "More reaction time, being able to switch off of blocks really quick, getting my assignments down, being able to reach with, almost, a four eye -- those are hard things to do. But I've come along and have really worked hard at it. So, being lighter, being leaner, being more explosive -- that does help."