CHARLOTTE, N.C. -- Former NFL running back Matt Asiata had plenty to keep him busy with three sons and two daughters under stay-at-home orders because of the coronavirus pandemic. That alone could have been an excuse not to answer a random text message from a reporter he didn’t know requesting an interview.

Then he saw the name in the text: Teddy.

“When you said Teddy, I was, ‘Shoot, I’ll be glad to talk to you about him,’" Asiata said by phone from his Utah home. “I will do anything to talk about a good guy.”

'This Can't Be Real' 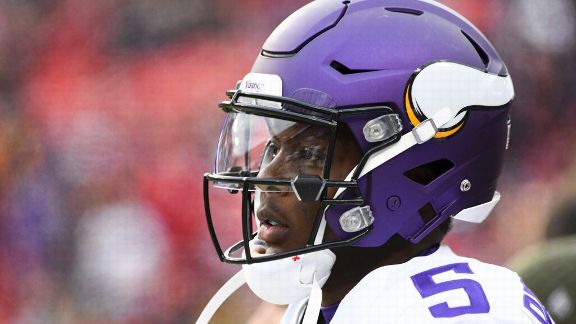 From ESPN The Magazine in 2016: Teammates relive the moment Teddy Bridgewater went down in Minnesota Vikings practice. Tim Keown

Asiata was on the practice field for the Minnesota Vikings on Aug. 30, 2016, when quarterback Teddy Bridgewater dropped back to pass. Asiata didn’t see what happened next because it was his job to sell the play-action pass to the left side.

But he heard the screams as Bridgewater’s left knee gave way during the non-contact drill. The quarterback suffered a dislocated knee, a torn ACL and other structural damage.

Like many teammates and coaches, Asiata wondered if Bridgewater’s career was over. Dr. Dan Cooper, the surgeon who repaired the knee, compared what he initially saw to something from the set of a sci-fi film, saying it was just “a horribly grotesque injury.”

The next time Asiata saw Bridgewater -- two weeks later -- he wouldn’t have known anything was wrong. The quarterback had his usual big smile and optimism.

Bridgewater reflected on the injury via a video conference after signing a three-year, $63 million deal to be the starting quarterback for the Carolina Panthers. Bridgewater will be a team's No. 1 quarterback entering camp for the first time since the injury, a milestone that seemed improbable a few years ago.

“Me, at the time, I had stumbled in my lane. It is a race I haven’t finished. I’m back in the race, and it’s a great feeling to be back in it.”

Asiata and others who were on the practice field that day in 2016 aren’t surprised by that comment.

“It says a lot about Teddy,” said Asiata, a free agent. “It shows everything happens for a reason. It’s really God’s plan. At that time, he wanted to test Teddy and how much of the mental part he could handle. Teddy did a great job. He’s going to play lights out.”

“He keeps everything in perspective, and he’s always thinking of the next step,” Robison said. “He understood failure was part of the process, and that with every failure there is a success story.”

Bridgewater’s positive approach endeared him to teammates and coaches. It’s why they’re pulling for him to make the most of his opportunity with the Panthers as they move on from Cam Newton, the 2015 NFL MVP.

“[Bridgewater] was in so much pain, but within two weeks he was back at the facility talking to us, supporting us,” said Jeremiah Sirles, Minnesota’s right tackle at the time. “He was such a leader through the whole thing.”

Like Asiata, Sirles and Robison weren’t about to miss an opportunity to talk about Bridgewater.

“There really was a point in time where all of us thought that was it, Teddy was done,” said Sirles, who signed with the Panthers in 2018 but spent the entire season on injured reserve. “Now to get another chance to be the franchise quarterback we all know he can be, it’s so great to see.”

When asked what it would be like replacing Newton, Bridgewater said, “I’m aware of the situation.”

Newton was “Superman” during most of his nine seasons with the Panthers. He was the face of the franchise, the player who endeared himself to fans with his football giveaways to kids after touchdowns and amazing athletic feats.

Newton wanted to continue his career at Carolina, working to rehab from foot surgery in December. But he became expendable because the Panthers got Bridgewater as they rebuild under first-year coach Matt Rhule.

What you need to know about the Carolina Panthers:

Sirles, who during his short stay in Carolina was a fan of Newton’s, believes the Panthers made the right choice.

“They’re actually more similar when they’re in the locker room,” he said of Bridgewater and Newton. “You’re not going to see Teddy being -- this is not a shot at Cam -- eccentric and outgoing all the time like Cam. ... Teddy is more reserved on the outside.”

Robison constantly used the word “process” when talking about Bridgewater. That’s the same term Rhule uses when discussing the foundation of his rebuilding process.

“He’s going to be a guy that keeps that locker room glued together,” Robison said of Bridgewater.

In the locker room, Sirles said Bridgewater would bring the same type of energy he witnessed in Newton.

“And guys follow it,” he said. “He’s going to be the first one in the building talking to guys. He’ll know everyone’s name. He’ll know how your day was. He also will hold everyone very much accountable.”

“He doesn’t care about the attention,” he said. “He just cares about winning and doing his job and doing the best he can to perfect the game. All he wants to do is win.”

A few days after Bridgewater's injury, the Vikings traded two draft picks to Philadelphia for Sam Bradford. By the time Bridgewater was ready to compete in 2017, he was behind Case Keenum, a journeyman who had replaced the injured Bradford.

“[Bridgewater] didn’t show up to work expecting it was his job to have because he was healthy,” Sirles said. “He knew he had to prove himself again and again and again.

“Every year in the NFL, you have to reinvent yourself. And Teddy did that every single year.”

Sirles was on the field when Bridgewater entered the huddle in the fourth quarter of a Week 15 game in 2017 against the Cincinnati Bengals, the quarterback’s first official game snap since the injury.

“Everyone in that huddle was smiling ear to ear,” Sirles said. “There were tears in everyone’s eyes because everyone loves Teddy that much.”

Returning was Bridgewater’s goal. His mother's battle with breast cancer was his motivation. It was Rose Murphy who convinced Bridgewater not to quit football as a 14-year-old when all he wanted to do was be the man of the house.

It was her strength in chemotherapy that wouldn’t allow him to quit after the 2016 injury.

“He didn’t lose focus,” Asiata said. “It was a minor setback for a major comeback.”

It didn’t happen overnight. Bridgewater signed a one-year deal with the New York Jets in March 2018, but he was traded to the New Orleans Saints that August when the Jets decided to start rookie Sam Darnold.

Bridgewater's only start that year came in the regular-season finale against the Panthers, completing 14 of 22 pass attempts for 118 yards and a touchdown in a 33-14 loss.

He got an extended chance to prove himself last season when Drew Brees suffered a thumb injury. The Saints were 5-0 in Bridgewater's five starts until the NFL's all-time leading passer returned.

That success and his relationship with new Carolina offensive coordinator Joe Brady, who spent the 2018 season as an offensive assistant with the Saints, made Bridgewater a natural choice for the Panthers.

“Nothing is too big for him,” Sirles said. “His is such an unbelievable story, and it couldn’t have happened to a better guy.”

And it couldn’t have come at a better time in a world dealing with uncertain and troubled times.

“Teddy represents hope,” Robison said. “No matter how down times get, his story shows us there’s always an ability to be able to come back from it.”