CHARLOTTE, N.C. -- With the first pick of the 1995 NFL expansion draft, the Jacksonville Jaguars selected Steve Beuerlein, quarterback of the Arizona Cardinals.

“I was actually hoping that I would go to Carolina," said Beuerlein, recalling that moment 25 years ago. “I felt better in Carolina. I liked the overall setup better. I had a better feel for the Panthers organization." 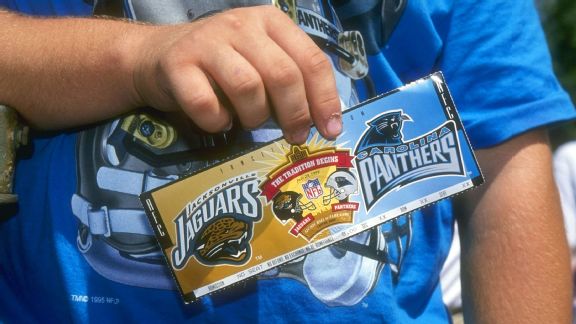 • 25 years after debut, Panthers and Jaguars are back on rebuilding path
• Bold 2020 NFL training camp predictions for all 32 teams
• 2020 NFL preseason schedule: Training camp and other key dates

Few have a better understanding than Beuerlein of how the Jaguars and Carolina Panthers initially were built. After one season with Jacksonville, Carolina signed Beuerlein to a three-year deal.

“The culture inside the organizations was very different," said Beuerlein, now an NFL and college football analyst for CBS.

Jacksonville built around head coach Tom Coughlin, who had complete control over football operations even though he’d never been more than an assistant in the NFL. He earned the nickname “Colonel Coughlin" for having almost militaristic rules.

“You’re talking about old guard, proven NFL guys," Beuerlein said. “And a coach they felt correctly could manage it without an ego and who wouldn’t cause any problems in Dom. As opposed to Jacksonville, with a GM who wasn’t really a GM and a coach who ruled with an iron fist.

“There were a lot of people who were literally afraid to approach [Coughlin] because of what they were going to have to deal with. It was a very, very uncomfortable environment."

There was a difference in talent, too.

Polian used the expansion draft to select players with cheap contracts so he could save money to sign free-agent veterans such as kicker John Kasay and linebacker Sam Mills.

Polian jokingly says he beat the system. There was a sense of urgency at Carolina to win immediately to help sell rights to permanent seat licenses for a new stadium being built in time for the team’s second season.

What they didn’t build around was Beuerlein.

“The situation did not unfold the way Tom Coughlin had explained it to me," Beuerlein said.

Before the college draft, the Jags traded third- and fifth-round picks to Green Bay for backup quarterback Mark Brunell.

“I went into Coughlin and asked how that affects me," Beuerlein said. “He said, 'Not at all, he’s a guy we feel has a chance to play down the road, but we’re committed to you.'

“Well, that lasted until the third quarter of the first game. We were losing 7-0 to Houston. We hadn’t turned the ball over. We were playing like an expansion team. He yanked me."

The Panthers finished 1995 with an expansion-record seven wins and then went 12-4 during the 1996 season that ended with a loss at Green Bay in the NFC Championship Game.

Jacksonville went 4-12 that first season and 9-7 in 1996, reaching the AFC Championship Game as a wild-card team before losing to the Patriots.

Carolina seemed to have the upper hand until four games into the 1998 season, when starting quarterback Kerry Collins, the fifth pick of the 1995 draft, asked for a trade. And the Panthers' defensive veterans all began playing old at the same time.

Beuerlein benefited after Collins was let go, starting 44 straight games and making the Pro Bowl in 1999. Brunell made his third Pro Bowl that season.

The Panthers rebounded in 2003 with the first of two trips to the Super Bowl, losing that year and again in 2015.

“Long-term, I guess you would say the Panthers have been more accomplished with the Super Bowls they’ve been to," Beuerlein said.