SALT LAKE CITY -- The Golden State Warriors beat the Utah Jazz 106-99 on Thursday night, a seven-point margin being what remained from a first-half 25-point lead.

Some nights, especially on a back-to-back set, the Warriors are playing against boredom. That's no insult to the Jazz, but instead a remark on what they were deprived of in this one. No Gordon Hayward, no George Hill, no Derrick Favors, no Rodney Hood, no Alec Burks, no chance. When you're that talent-bereft, there isn't a fiery speech in existence sufficient to conjure a victory against stiff opposition.

That is, unless the opposition sinks to the challenge. Initially, the Warriors resisted such an inclination and were on their way to ending the game early. They hit Utah with a 29-1 run in the first quarter that reminded one of Wednesday's roasting of the Los Angeles Clippers.

Golden State wasn't on fire from long range, but it was playing good-enough defense and moving well enough on offense to more than compensate.

But for the heroics of one Joe Ingles (21 points on 13 shots for Utah), this would have been a great big rout. Though the Warriors pushed the lead to 25, Ingles kept the game within reach. At the half, the Warriors still had a 19-point lead and little to worry about.

Maybe the altitude hit. The Warriors came out of the break sluggish, hardly moving off the ball. When their movement improved, their passing got poor.

“A loss of focus,” Warriors coach Steve Kerr assessed when asked what happened in the second half. “You know, our first quarter was great -- pushed the ball, our defensive intensity was fantastic -- and then I think we let down. We started turning it over.

"Some careless, purposeless plays where we didn’t really have an idea of what we were trying to accomplish.”

The lead faded to 14. Then, a scary sight as Draymond Green fell with his foot trapped under Stephen Curry's. After some time spent on the floor, Green limped to the locker room, followed by trainers.

With Green out and Curry taking his usual early fourth-quarter rest, Utah whittled the lead to five. Improbably, the Warriors were in danger of losing a game to half of the Utah Jazz.

Disaster was averted, fairly quickly. One, because news spread that Green, who sprained his ankle, was healthy enough to return if needed (he later would). Two, because Kevin Durant and Ian Clark combined for some timely offense. Durant ended the game with dunks and Clark ended it with 3-pointers. Of note was Klay Thompson, who struggled in this one, not playing crunch time.

“I just thought Ian was playing well,” Kerr said of sticking with Clark over Thompson. “And he was really getting after it defensively and it made sense to keep him out there.”

Durant claimed three dunks in the final quarter, the most impressive of which came off a sprinting Euro step during which he shrugged off some Trey Lyles contact en route to hurting the rim. It was as though Durant had decided the pretense of a game had gone on long enough.

Of the play, Green said of his teammate’s move and finish, “It was an aggressive move. You got the defender backpedaling, you attack him and that’s what he did. [Utah's] fans didn’t like that too much, but I enjoy it.”

“It felt good making that play,” Durant said of the sequence. “Then you look over in the stands and you see a lot of crazy stuff come at you and you hear a lot of crazy stuff. Makes you feel good when you can make a play and kind of quiet the crowd.”

There was an aura of defiance to Golden State’s night. Perhaps it was the seasoning needed to push through an otherwise desultory December night. After the game was in hand, with the Warriors up eight points with 9 seconds remaining, Durant received a technical foul from veteran official Monty McCutchen. 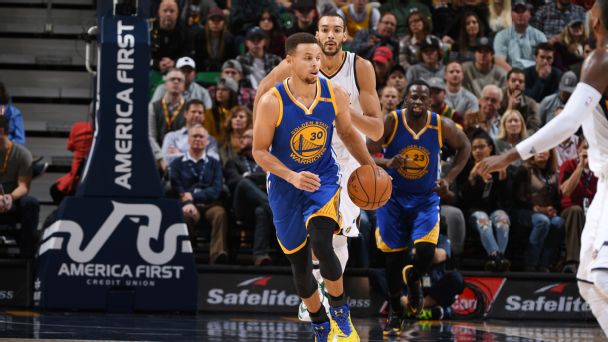 After zooming ahead with an early 29-1 run, the Warriors let a second-half stumble nearly derail a winning effort in Utah.

“Yeah, he was on edge all night so I knew something was coming,” Durant said. “Can’t really talk to him, especially now. They changed the rules and stuff. I’ve got to just shut up.

"Because they basically get to just say what they want, act how they want and I just gotta be better at controlling my emotions. That was a stupid tech by me.”

Durant and Green were laughing around the time of that tech, but according to Green, it wasn't about McCutchen’s whistle.

“We was laughing at [Jazz coach] Quin Snyder, [who] kept calling timeouts,” Green said. “Like, 'Bro, you’re down 10 with six seconds left. It’s kind of over, my man. Let’s just go to the restaurant, have a good dinner, chill.' So that’s what we were laughing at.”

Though the end may have dragged, and the game may have gotten rocky, the Warriors could at least laugh easily. It wasn’t their best effort, but it also didn't need to be. When you're playing against boredom, victory means merely avoiding catastrophe.