OAKLAND, Calif. -- The Golden State Warriors ruined what was supposed to be an intriguing matchup, squeezing the Utah Jazz on Tuesday 104-74. In what was one of their best defensive performances of the season, the Warriors snuffed out a Jazz offense that was without George Hill and Derrick Favors, demonstrating a far better level of communication than they'd shown early in the season.

After this one, defensive leader and DPOY candidate Draymond Green appraised the strides made on defense between the start of the season and today, saying, "It's night and day." The stats would validate that statement, as the Warriors now rank second in defensive rating behind the Grizzlies.

The game began as a stalemate of sorts but quickly tilted to the team with superior firepower. "This is an ugly game," Green said of his initial thoughts, when both offenses were stuck in the thickest of mud. The Jazz have an ability to drag opponents into frigid shooting stretches at plodding paces, so perhaps the start of this game wasn't shocking. Still, it was ghastly to see these teams combine to open the game 2-of-25 from the field. Yes, you read that correctly. Of the first 25 shots in Warriors vs. Jazz, 23 were misses. The Jazz were effective in guarding Golden State's array of off-ball cuts and the Warriors weren't especially keen on wresting free.

Golden State's first basket came off a Kevin Durant dunk 7 minutes, 53 seconds into into the game. Their first jumper also came courtesy of Durant. But the real slump-busting came from Klay Thompson, who went 6-of-7 in the Warriors' breakout second quarter. Thompson's most impressive play of the period might have actually been a slick left-handed pocket pass for an Andre Iguodala 3-pointer.

Thompson is hardly Chris Paul, but he has developed a facility with pocket passes over the years. Later in the quarter, with a little more than two minutes left, Green (15 points, 11 rebounds) flaunted his own time-honed skill when he went baseline to baseline for a dunk on a Jazz team that had cracked. The game ended there in all but the technical sense. Green said of the play (which resulted in a technical for hanging on the rim), "I think it definitely gave us some momentum. It's kind of a random play that nobody expected. I didn't even expect it." 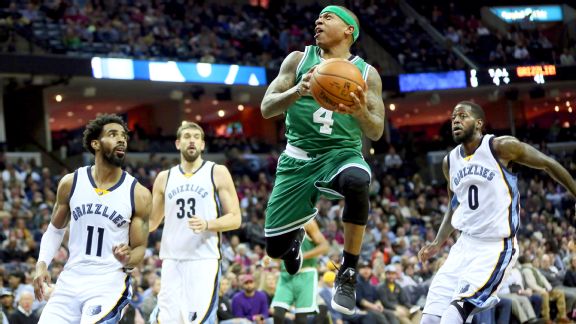 Boogie got 55, Isaiah went for 44, Patty sunk the Rockets and Steph found his range.

Also in the vein of signature skills, this was the game where Stephen Curry (25 points, 18 shots) finally uncorked a few off-the-dribble 3-pointers -- three of them, to be exact. The ability to flick rainbows off the bounce is definitional to Curry's game, so it was surprising to see him off target this season. He went into Tuesday's game shooting 29.5 percent on 3-pointers off the dribble, and had appeared reluctant to try his luck in his recent games.

Against Utah, he found some comfort in the familiar, knocking in an off-the-dribble 3-pointer on a two-for-one opportunity. What really conjured images of last season was his iso off the dribble strike over Utah big Trey Lyles. It's understandable why Curry, used to handling the reins in this system, has been slow to find his old form. Perhaps Tuesday marks a return to last season's off-the-dribble lethality.

Curry said of his off-the-dribble 3-pointers, "It's just a flow thing. The three I got tonight, two were in transition. Just setting a guy up for a pick-and-roll or setting him off a dribble move and knocking it down and you just find a flow. I'm not really worried about what the percentage is for that shot this year. It'll always be there."

"It'll always be there," is a good motto for a shot that has years of evidence in its favor. Even if Curry slumps, defenses will hardly slack. They will guard him up close, creating opportunities elsewhere. A couple of months will not diminish the fear factor of Steph Curry, dribbling beyond the arc.

As for Golden State in general, this game was testament to how the defense has improved, immensely and quickly. They won't get credit for this improvement, as great things are expected from the cocksure superteam, but it's an important step in fulfilling the hype. Losing Andrew Bogut's rim protection was an obstacle, but now Golden State is overcoming that, understanding how to make use of the new talent.

As Green said after the game, "You lose a guy like Bogut who, you almost can funnel stuff to Bogut. You funnel someone to him, you know he's there and he can kind of erase any mistake that someone makes, and then you lose that, you have to get used to not having that there. When you had it there for the last four years, it takes a little while to adjust to that. However, I think we adjusted to it."

The Jazz are a good team, even without Hill and Favors, and the Warriors made them look wholly bereft of scoring talent. What was supposed to be an intense battle led to such novelties as Shaun Livingston football hiking a pass and JaVale McGee launching a 3-pointer for the joy of it. The Warriors are playing -- and defending -- well enough to separate themselves from suspense.