HOUSTON -- Mike D'Antoni said something maybe he didn't think would be possible.

"We stress defense a lot early," the Houston Rockets coach said. "And it's showing up and our offense is behind and we got to pick it up."

So, the Houston Rockets' defense is ahead of its offense?

D'Antoni was asked a follow-up question if he ever thought he would say that his defense is ahead of his offense, given the offensive talent he has.

"Of course," he said with a smile. Then D'Antoni got serious.

"It just shows you how much they're committed to winning," he said. "And they are and we'll fix the offense and if we keep the defense right there, then we have a chance to be really good.”

It was that offense that pushed the Rockets to lead the Dallas Mavericks by as many as 17 points in the first half in Sunday night's home opener. But the offense disappeared, becoming stagnated by a lack of ball movement and too much one-on-one play.

The Rockets' defense played a major role in a gritty 93-92 victory. Before the game, Mavs coach Rick Carlisle said he wanted a grind-it-out game to slow down the Rockets' pace.

After a disappointing defensive effort on opening night at the Los Angeles Lakers, the Rockets changed course. 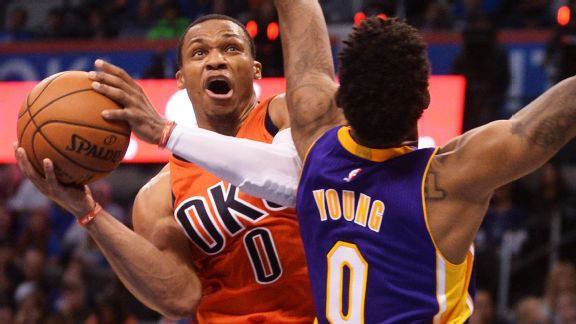 Russell Westbrook is the first player since Magic Johnson in the 1982-83 season to begin a season with a triple-double in two of the first three games.

In the first two games of the season, James Harden filled up the stat sheet, and Trevor Ariza produced 27 points in a victory over the Mavs on Friday night. K.J. McDaniels' athletic plays gave the Mavs fits, so slowing things down and being physical seemed like the logical play for Dallas.

This game featured Andrew Bogut doing a little MMA on Ryan Anderson, smashing him in the face. That act triggered a flagrant foul 1 after a review.

Ariza got tangled up on the floor with Salah Mejri, causing double technicals.

Harden, who drew a foul on Wesley Matthews in the closing seconds of the game, barked at the Mavs' bench after the foul was called.

Just something defensive-minded teams do against their rivals, right?

"I don't know if you could call it a rival," said Harden, who made one of two free throws to seal the victory with one-tenth of a second remaining. "I just think you got competitors on the court that want to win, that's all it was."

The Rockets' 17-point advantage was lost due to poor offense in the third quarter. Houston missed its first 10 shots from the field, gaining only two points on Harden free throws. Dallas kept grinding its way back into the contest, pulling to within single digits on a Matthews 3-pointer with 9:12 left in the third.

The Rockets continued to struggle with their shot in the fourth quarter, making only 5 of 17 attempts and getting outrebounded 14-9.

Yet defensive stands, seven consecutive in the fourth quarter, kept the Rockets comfortably ahead until a J.J. Barea 3-pointer cut the deficit to 89-83 with 3:47 left.

"In the half court, I was proud of how we stepped up," Sam Dekker said. "We went to some different schemes we hadn't done too much [of] and we made it work. One thing we were proud of is we tried to get three stops in a row and we did that and two straight shot-clock violations [in second quarter], which is huge in building momentum and building leads, especially for that second group. You got to come in and really play defense because the scoring without James and Eric [Gordon] won't be there as much. So we got to get up on the open court and play some defense and I thought we did a good job of that.”

Harden took the game over at the end, drawing a foul on Matthews to set up the go-ahead free throw.

The Rockets scored less than 100 points -- and won. It was a game in which they shot better than 50 percent from the field and 3-point range and somehow needed defense to win.

"Yeah," Harden said. "We've been together a few times, this summer and training camp, we're a little bit of ahead and we're doing a really good job. Now we just got to continue to get better and continue to learn and figure out the lineups and what lineups are really good defensively and that will come with games being played, so were not worried about that."