KANSAS CITY, Mo. -- The Kansas City Chiefs settled on an interesting strategy to improve their hapless defense. They took two of their most productive players from last season and dispatched them for nothing that will help them win games in 2019.

The Chiefs agreed to trade one-half of their edge pass-rushing combination, Dee Ford, to the San Francisco 49ers on Tuesday night. The return is a second-round draft pick, but one the Chiefs won't get to use this year. It's a second-round pick in 2020.

That's more than the Chiefs received days ago, when they released their other top pass-rusher, Justin Houston. The 2019 player return is nothing on Ford and Houston, who combined for 22 sacks last season. 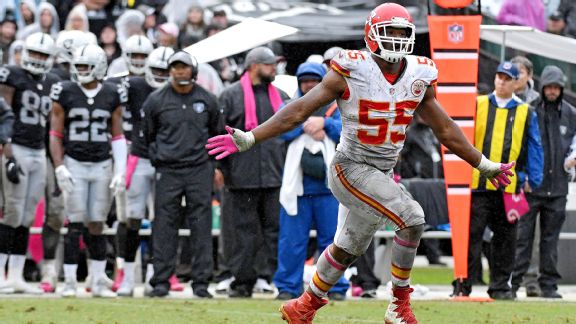 49ers might not be done boosting their pash rush. Story

• Ford traded to 49ers for 2nd-rounder

Throw in losing starting cornerback Steven Nelson, who agreed to contract terms as a free agent with the Pittsburgh Steelers, and the Chiefs have taken a hit. Imagine their 2018 defense, as bad as it was, without Ford, Houston or Nelson.

But the Chiefs obviously have a plan. This was all self-inflicted. They cut Houston when they didn't have to. They actively sought to trade Ford. They expected to lose Nelson in free agency for months.

The tangible and immediate benefit to all of this maneuvering is the Chiefs cleared $30 million in salary cap space by releasing Houston, trading Ford and letting Nelson walk. They've used some of it already on three free agents: safety Tyrann Mathieu, linebacker Damien Wilson and running back Carlos Hyde.

If history is a guide, the Chiefs aren't finished. General manager Brett Veach isn't afraid of a bold move. Two years ago he pushed the Chiefs to make the draft day trade that put them in position to select quarterback Patrick Mahomes. Last year, with an offense that already included Mahomes, Tyreek Hill, Travis Kelce and Kareem Hunt, Veach's big free-agent splash was the signing of a wide receiver, Sammy Watkins.

The Chiefs started this defensive rebuild last year, when they traded up in the second round to draft defensive end Breeland Speaks. He was viewed at the time as a potential replacement this year for either an expensive Houston or the potential free agent Ford. Without either one now, Speaks looms as a key figure.

The reconstruction continued after last season with the hiring of a new defensive staff, led by coordinator Steve Spagnuolo. The moves made by the Chiefs, the trade of Ford in particular, are indications of Spagnuolo's influence. Ford was viewed as a less-than-ideal fit in the Chiefs' new 4-3 base scheme and they traded him rather than bend the system to fit his talents.

The Chiefs also clearly didn't feel Houston would be a productive player, at least not to the point where they could justify retaining him at a salary cap cost of more than $21 million.

Between the $30 million in new cap space and the draft, in which the Chiefs have three choices in the first two rounds, they're capable of covering plenty of defensive ground.

They'll have to. Despite signing a premier safety in Mathieu, the Chiefs have gone backward on defense in recent days. The moves they make to get it headed in the other direction will be very interesting.