COSTA MESA, Calif. -- A Jason Verrett jersey hangs on the wall of Los Angeles Chargers general manager Tom Telesco's office at the team's facility -- a constant reminder of the player many consider one of the toughest and most talented players in the facility.

The Chargers drafted Verrett with the 25th pick of the first round in 2014, but the TCU product has played in just 25 of a possible 80 games in five NFL seasons. He's showed flashes of his elite quickness and playmaking ability at times, including last summer before suffering a torn Achilles tendon during a conditioning drill the day before training camp, forcing him to miss the 2018 season.

Despite the fact that he's played just one game the past two seasons, there's still a chance Verrett, a pending unrestricted free agent, stays with the Chargers. General manager Tom Telesco has to be leery of Verrett going to another team and realizing his true potential as a Pro Bowl corner, particularly for an AFC West rival like the Oakland Raiders or Denver Broncos. 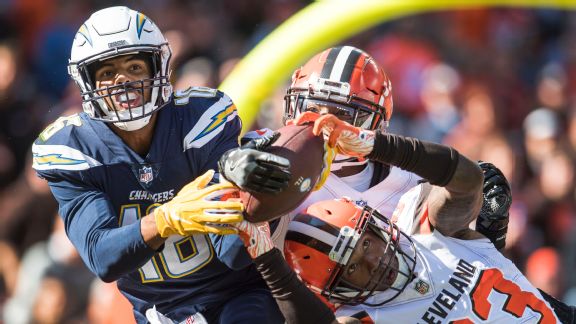 When healthy, Verrett is one of the best cornerbacks in the NFL, earning an invitation to the Pro Bowl after the 2015 season.

"There's risk involved and there's a high reward involved," Telesco said about bringing back Verrett. "The one thing is that we know him very well as a person.

"There's a lot of factors. He's had a rough last couple of years. Even this past year when he wasn't playing, he was still a big part of the defense just being around and being a leader."

Other than his injury-plagued past, Verrett checks all the rest of the boxes when evaluating a player. He loves football, is one of the hardest workers in the building and is a leader on the field.

And when healthy, Verrett is one of the best cover corners in the NFL. The Chargers could have used Verrett's unique skill set during the AFC divisional playoffs, when cat-quick slot receiver Julian Edelman torched the Bolts' defense for nine receptions and 151 receiving yards.

Questions lingered about Verrett's durability due to his small frame leading up to the draft in 2014. Those concerns have proven correct, with the TCU product sustaining, shoulder, knee and lower leg injuries that have forced him to miss chunks of time.

But Telesco and the Chargers would assume very little risk by bringing Verrett back on a one-year deal to see if he can stay healthy. If he does it adds another playmaker to an already talented defense.