HOUSTON -- This isn’t how the Utah Jazz envisioned Joe Johnson fitting when they signed him last summer. The plan wasn’t to turn Johnson, a savvy veteran who spent his first 15 NBA seasons playing swingman, into a power forward.

The Jazz decision-makers won’t claim to be that smart.

“I should have figured it out sooner,” coach Quin Snyder said after Utah’s 115-108 road victory Wednesday over the Houston Rockets.

Johnson, filling in for injured Derrick Favors as the starting power forward, scored 16 points on 5-of-10 shooting and drilled a dagger 3-pointer in the final minute. It’s not necessarily about the individual numbers for Johnson, whose average of 8.5 points per game is his lowest since his rookie season. It’s about how the Jazz’s offense hums with Johnson manning his new position.

According to nbawowy.com, Utah has an offensive rating of 121.9 in 284 minutes with Johnson at power forward and co-stars Gordon Hayward and Rudy Gobert on the court. For a frame of reference, the Golden State Warriors lead the league in offensive rating at 113.6 points per 100 possessions.

In other words, an elite defensive team morphs into an offensive monster with Johnson, who is 6-foot-7 and 240 pounds, opening up the floor as a power forward. The net rating with those lineups: plus-19.1.

“He’s unique not just in his ability to shoot but his ability to playmake at that position,” Snyder said. “You can find a guy that can make a shot, but he can make plays for other people.”

At this point, Snyder saves all of Johnson’s minutes for power forward. That has something to do with swingman Alec Burks being healthy after he missed the first half of the season while recovering from ankle surgery, but the Jazz like Johnson so much at the 4 that 21-year-old lottery pick Trey Lyles has fallen out of the rotation.

“I just love being out there, regardless of what position coach wants me to play,” Johnson said.

The offense often sputters with Favors at power forward. In fairness to him, that’s partially due to the fact that his knee has bothered him since he suffered a bone bruise in the preseason, stealing some of Favors’ explosiveness. But it’s also a spacing issue.

At 6-foot-10, 265 pounds, Favors is a throwback power forward, a bully who gets most of his buckets on the block or around the basket. His shooting range extends to maybe 15 feet. There’s a lot of clutter in the paint when Favors is paired with Gobert, which frankly is why it’s likely Favors will be the odd man out in Utah long term. At this point, the most important minutes Favors gives the Jazz come as a backup center.

Johnson’s mere presence -- the threat of a 40.1 percent 3-point sniper -- creates room for the Jazz’s primary ball handlers to run pick-and-rolls with Gobert. At 35, Johnson doesn’t have the same quick first step he did during his days as a perennial All-Star, but he’s a crafty creator who can still make plays off the dribble, especially against power forwards forced to close out on him.

“He’s pretty hard to guard, and you can play simple basketball,” said Gobert, whose 23 points against the Rockets came on 7-of-8 shooting.

Johnson is also still more than capable of initiating the offense when asked, a rarity for a power forward. That’s a luxury when teams put pit bulls on the Jazz’s primary playmakers, particularly when point guard George Hill's sore toe forces him to sit, as was the case again Wednesday.

“He adds another weapon for us, especially when teams have good defenders that can pressure some of our ball handlers,” said Hayward, who matched Gobert with a team-high 23 points. “You can play through him a little bit and take some of the pressure off.”

It stands to reason that defending power forwards could be a challenge for a guy making a late-career transition from the wing. But it really hasn’t been an issue with Johnson. It helps that he plays with Gobert, the NBA’s premier rim protector and a dominant rebounder, but Johnson isn’t a guy who is going to get pushed around. 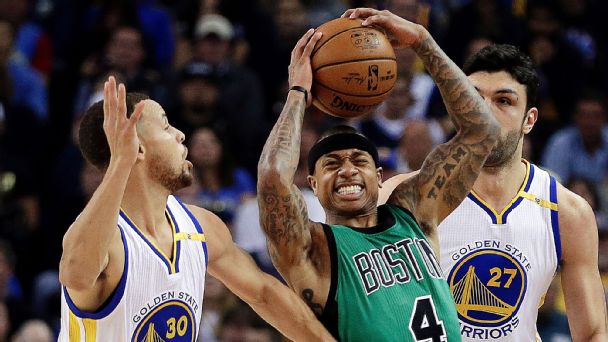 The Celtics held the Warriors to a season-low 86 points to win in Golden State for the 2nd straight season.

“He’s just so strong,” Snyder said. “He’ll take a challenge defensively. I think that makes him even more capable of playing that position, not just situationally but as an everyday guy.”

Plus, as Johnson noted, his transition to power forward follows a league-wide trend, so it’s not as though he has to bang with Karl Malone types in the paint.

“It’s not that tough, man, because the way the league is going, a lot of guys who play the 4 are really my size,” Johnson said. “You’ve got a couple of teams that play with two traditional bigs, but for the most part, it’s not that tough.

“The biggest adjustment is playing guys that are a lot bigger than me and a lot more physical, keeping them off the glass. But I think it’s tough for them when they’re on defense. It keeps the floor spaced. It’s easy for me to go off the dribble and make plays, not only for myself but for my teammates, so it’s fun.”

The Jazz’s success with Johnson playing power forward doesn’t mean it would be wise to start him there on a regular basis. Don’t expect that to happen unless Favors’ knee keeps him off the court.

Snyder knows he needs to manage the minutes of Johnson, who missed the previous three games with a sore groin. And it’s much more important to have Johnson closing games than starting them.

His position has changed, but Johnson’s status as a cold-blooded, crunch-time shooter hasn’t. He’s 8-of-12 from 3-point range in the clutch this season, according to NBA.com.

“If they need me to step up and make a play, then I’m there,” Johnson said. “But I play my role.”

It’s an important role, if not the one the Jazz planned for Johnson.