FLORHAM PARK, N.J. -- Three NFL head coaches already have been fired this season. Two of them, Bill O'Brien and Dan Quinn, were slightly above .500 and won playoff games in their years with Houston Texans and Atlanta Falcons, respectively. Quinn almost won a Super Bowl. Matt Patricia's record with the Detroit Lions was ugly (13-29-1), but at least he made it to Halloween as a faux playoff contender before being dismissed three days ago.

Which brings us to New York Jets coach Adam Gase: Why is he still employed?

It's a fair question, considering the volatility of the job and, well, his team stinking for the better part of two seasons. 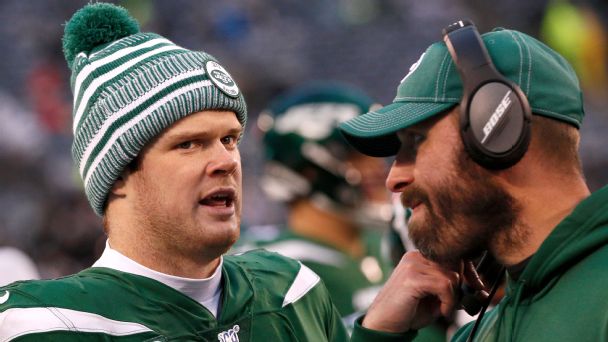 By every objective measure, the Jets (0-11) are the worst team in the league, and yet Gase, 42, remains on the job, dutifully preparing for Sunday's game against the visiting Las Vegas Raiders (1 p.m. ET, CBS). His two-year record is 7-20 -- a .259 winning percentage, which ranks sixth worst over the past 10 years, according to research by ESPN Stats & Information. His average margin of defeat (9.4 points) is fourth worst since 2000 for a coach with the same team. Both stats are based on a minimum of 25 games.

Gase's ouster appears inevitable, but the Jets' fan base -- angry and passionate -- wonders why he remains on the sideline, calling plays (or not calling plays, he insists) for an offense that ranks last in points and last in total yards.

Here are a few theories:

Patient owners: In 20 years of ownership, the Johnson family never has fired a coach during the season. Its previous firings (Eric Mangini, Rex Ryan and Todd Bowles) were done as soon as the season ended. Jets owner Woody Johnson handled the first two, CEO Christopher Johnson the third. Clearly, they do not make knee-jerk decisions.

Christopher has been running the show for the past three years, with Woody serving as U.S. ambassador to the United Kingdom. Presumably, Christopher would consult with his older brother before making any major moves, especially with Woody's anticipated return in the coming months. They apparently aren't concerned about losing ground in what figures to be a competitive head coaching market.

Strong allies: Gase has developed close relationships with Christopher Johnson, who hired him, and team president Hymie Elhai, who ascended to the position shortly after Gase became the coach. Those are good people to have in your corner.

Suffering in silence: Like most teams, the Jets are playing home games in an empty stadium because of COVID-19 concerns -- and that has worked to Gase's benefit. Nothing irks an owner more than paying customers, in a half-empty stadium, screaming for the coach's head. It's a time-honored Jets tradition, going back to the 1980s when fans chanted, "Joe Must Go!" at former coach Joe Walton. These days, Johnson doesn't have to hear the screams of "Gase Must Go!" that surely would be filling MetLife Stadium. Sure, there's plenty of vitriol on social media and talk radio, but that can be turned off.

The Darnold factor: Quarterback Sam Darnold has had Gase in his ear (literally and figuratively) for nearly two seasons, and the Jets might not want to disrupt the continuity. The counterargument is, what's the harm? After all, he has regressed under Gase, but the coach continues to sell the idea Darnold is on the cusp of improvement. An improved Darnold means higher trade value in the offseason. "I think there are things we can fix very quickly," Gase said Monday.

Who's next? You can't fire the coach and put the team on autopilot for the rest of the season. You need an interim coach. The most logical choice would be defensive coordinator Gregg Williams, who has previous head coaching experience, but there could be hesitancy because his defense (ranked 25th) has done nothing to distinguish itself.

Losing for Trevor: Conspiracy theorists believe ownership, determined to land the No. 1 pick in the 2021 NFL draft, doesn't want to make a change out of fear that it would spark the team and result in -- egad! -- a victory. One victory could cost the Jets a shot at Clemson Tigers quarterback Trevor Lawrence, the presumptive top pick. Under this scenario, they grin and bear it for a few more weeks, letting Gase lead them directly to Lawrence. It could be genius.