TRENTON, N.J. -- There's a glow to the skin of New York Yankees Double-A manager Bobby Mitchell. It comes from hitting endless fungoes in the sun, a physical trait of a baseball lifer.

Mitchell happens to be one of just four men to play for teams that made the Little League World Series, the College World Series and the MLB World Series. He was an outfielder on the 1981 Fernando-mania Dodgers for 10 games, but didn’t appear in October when L.A. won the Series.

Later in the 1980s, he worked in the Montreal Expos' system, tutoring the likes of Larry Walker, Marquis Grissom and Rondell White. In 2011 with the Angels, he was the one who told a 19-year-old Double-A outfielder named Mike Trout he had gotten the call to the big leagues.

Mitchell, 62, has been up close and personal with some of baseball's Mona Lisas. And when he surveys the Yankees’ farm system, he sees paint hitting the canvas all over the place.

“You don’t really see this type of talent level very often,” Mitchell said. “It makes it exciting for us as staff and player development.”

The excitement in the Yankees’ system stretches from Scranton to Trenton and down to Charleston and Tampa. Next month, it will arrive in short-season Staten Island and in Pulaski, Virginia, for Rookie ball. There are potential future major leaguers everywhere you look, turning a road trip through the minors into an epic coming attraction, as opposed to the old Yankees system that was more like a straight-to-DVD affair. 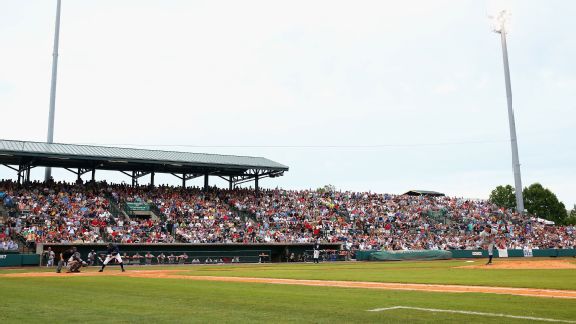 Here's where to go, and who to see, down on the Yankees' farm.

At the moment, Trenton is the epicenter, where shortstop Gleyber Torres, the Yankees' top prospect, is the star, along with the franchise's highest-ceiling starter, Justus Sheffield.

The Trenton Thunder’s stadium, Arm & Hammer Park, is an hour and 20 minutes from Yankee Stadium and situated on the banks of the Delaware River. The park features a Road to the Majors board in its corridors, which lists every Thunder player and coach who has made it to the majors. With Torres, Sheffield, third baseman Miguel Andujar and outfielder Billy McKinney, the list figures to grow.

Torres, 20, isn't a publicity hound; he's accommodating in interviews, but a little shy. This hasn't stopped the commotion around him that increased when he was the main chip in the Aroldis Chapman trade last year with the Cubs.

In Trenton, Gleyber-mania, as the local writers have dubbed it, has been one of the biggest sensations since the Yankees established a farm team there in 2003. Eric Lipsman, the Thunder’s vice president of corporate sales, saw it immediately when the team had its Welcome North event before Opening Day.

The line to receive Torres' autograph was a hundred deep, stretching around the interior of the ballpark. The hype was there when Joba Chamberlain and Phil Hughes came through Trenton, but that was a decade ago. Since then, only the reception for Aaron Judge has been on par with Torres’.

“It is a neat thing when you get that type of excitement for Gleyber,” Lipsman said.

PNC Field, located in Moosic, Pennsylvania, is just two hours from Yankee Stadium and is the final stop before The Show. The stadium is built into a mountain, making for a gorgeous vista. Nearby is the Steamtown National Historic Site, which highlights the railroads of the 20th century. That history lives on in the team's name: the RailRiders.

While the upper levels of the Yankees' minor league system boast the most players who could be Yankees sooner rather than later, the lower levels have their share of talent, too. At high-Class A Tampa, in the Yankees’ spring training home at Steinbrenner Field, Jorge Mateo (attitude) and Ian Clarkin (injury) are trying to pump life back into their minor league stock.

Mateo, just 21, was the Yankees’ top shortstop prospect before Torres pushed him aside.

“He is probably one of the fastest in all of baseball,” said Gary Denbo, the Yankees’ vice president of player development. “He is an elite athlete, but at the same time he needs to improve his baseball skills."

Clarkin, 22, is a pitcher who was taken one pick behind Judge in the 2013 draft.

“He is a guy with three solid pitches,” Denbo said.

"You don't really see this type of talent level very often. It makes it exciting for us." Trenton Thunder manager Bobby Mitchell

At the Yankees’ low-A affiliate, in Charleston, South Carolina, the RiverDogs play at Joseph P. Riley Jr. Park, otherwise known as The Joe. There, outfielder Blake Rutherford, the Yankees' No. 1 pick last year, shows off a sweet swing that some believe has him on a fast track to the bigs. The Yankees have yet another shortstop prospect, 21-year-old Hoy Jun Park, who's hitting well over .300. Then there's Estevan Florial, a left-handed hitting, 19-year-old Haitian outfielder, an under-the-radar prospect Yankees personnel rave about.

These players, even ones as hyped as Torres, know they haven’t done anything yet. When Torres was growing up, he idolized fellow Venezuelans Omar Vizquel and Miguel Cabrera.

“Vizquel was a great example for me,” Torres said. “Miggy is the best hitter in baseball. He hit beautifully to right field in a similar way that I can do. Before games, I watch a lot of video from Miggy.”

Torres describes meeting Cabrera with the wide-eyed awe of a kid. But that belies the self-assuredness that many, if not most, of the young players in the Yankees’ system carry. Still, they aren’t living the life of luxury yet, taking eight-hour bus rides and playing some games with a.m. start times.

For fans, it's about seeing these players before having to pay top dollar in the Bronx.

“To come here to the minor leagues and get that first taste and feel like you know something that other people don’t, it is just fun,” said Adam Giardino, the Thunder’s play-by-play man the past five years. “It is just fun to tell that story and say, 'I saw him when ...'"

Mitchell, the Double-A manager, played 202 big league games over four seasons in the early '80s, and he can say that about a lot of players. He won't predict another Trout is on his way, but Mitchell thinks the Yankees will produce something special -- and he should know

It's just a matter of time.

“There is some growing that needs to be done because they are so young,” Mitchell said.