Quick-hit thoughts and notes around the New England Patriots and NFL:

1. Different Patriots TV program: The Patriots have produced their own television show since 1995, and June's episode was unprecedented with 21 members of different parts of the organization coming together for a virtual roundtable.

Football was on the back burner. This was about humanity, social justice and defeating racism.

One of the first things that had to happen was breaking free of time constraints.

"We do a half-hour show every month during the offseason. For this month, I felt it would be irresponsible to do a show on anything but this topic," explained Matt Smith, senior executive producer of Kraft Sports Productions. 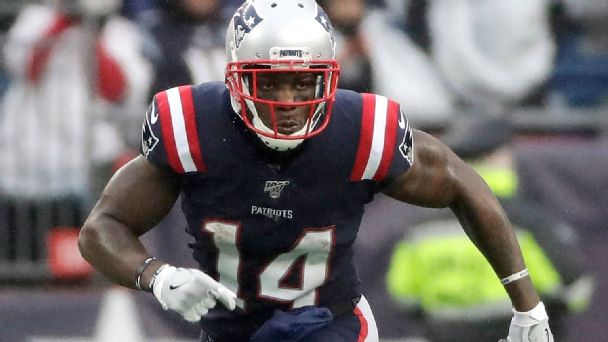 "The Kraft family fully supported the idea, so I reached out to some of the leaders in our organization, including Robyn Glaser who does a great job working with our players on social reform. When the players and staff were asked if they would like to participate, the response was so positive that I realized a 30-minute show wouldn't be enough [it went an hour]. ... The result, I think, is a good start. A series of honest, open, sometimes uncomfortable discussions, that quite frankly everyone should be having, seeking a commitment to change."

The 21 panelists were split into three groups:

The diversity and varying perspectives of the panelists was a highlight, giving viewers a feel for some of the heartfelt discussion that players, coaches and others have been a part of during virtual offseason meetings.

In the interest of full disclosure, I am often a guest on the show, but I was bumped for this episode. For good reason.

2. Scouts' takes: The inclusion of Cargile and McGill into the Patriots' TV program shined a spotlight on two under-the-radar pro scouts who enter their 10th and ninth seasons with the franchise, respectively, and are the two highest-ranking minorities in the team's personnel department. Both have successfully transitioned from playing careers -- Cargile attended Columbia and played safety in the NFL from 2004 to '09, while McGill left North Carolina among the top 10 in school history in rushing yards and touchdowns. Cargile was named the 2016 AFC Scout of the Year by the Fritz Pollard Alliance. One of the important parts of their roles is to scout the team's next opponent, and provide coach Bill Belichick and his staff with detailed reports.

3. Cargile's perspective: "Living as a Black man in America, the level of consciousness you have to have when you leave the house every day is pretty much an every-day struggle. I live in a town-home community where my trash bin is at the end of the complex. If it's getting late, instead of me saying, 'I can take my trash out at 10 o'clock at night,' there might be a problem with that if it's cold outside and I have a hoodie on, and somebody looks out the window and they see a tall, imposing black man they see as threatening. That can turn into a situation where the police are called, we've seen this happen before in different situations. So just as a Black man, the level of consciousness you have to have on a day-in and day-out basis is something we have to deal with." -- Steve Cargile, on Patriots All-Access

Co-hosts Alex Marvez and Bill Polian asked Scarnecchia about left tackle Isaiah Wynn, and if he can overcome two injury-shortened seasons and be the player the Patriots hoped they were getting when selecting him 23rd overall in the 2018 draft.

"Yes, he can. Absolutely. There was plenty of indications of that in the 6-7 games he started and played [after injury] last year. You see him do a lot of really good things," Scarnecchia said. "We all knew when we took Isaiah, it was a very lean year for tackles. This year was so classic with that within the first round, six tackles got taken. ... By the time Isaiah came to us, we went into that draft saying, 'Look, there's not that many tackles, and we need a tackle, so we need to be creative and maybe look outside the box for some things here.'"

Wynn was considered an outside-the-box draft pick because he is shorter than most NFL tackles at 6-foot-2, and his arms aren't as long as the prototypical prospect, which led some teams to view him more as a guard. But Scarnecchia repeated on Sirius XM NFL Radio what he had said in the past: Wynn's exemplary play at Georgia and in the SEC -- which he views as the best conference in the country -- convinced the Patriots he was more than capable.

5. Cajuste update: With Scarnecchia's comments as a springboard, 2019 third-round pick Yodny Cajuste, an offensive tackle from West Virginia, is one of a handful of players who has continued to report to Gillette Stadium into late June. Cajuste, who missed his entire rookie season because of a calf injury sustained before he was drafted, is allowed to do so due to that injury history. Can Cajuste show he's capable of handling swing-tackle duties in 2020, if not more? It's one of several questions surrounding young players the Patriots project to have important roles this season.

6. Keys for Patriots OL: Scarnecchia detailed on the radio program the qualities the Patriots look for when drafting offensive linemen:

7. Tackling in camp: The Patriots finished last season as the NFL's top-ranked defense, but one area they slipped was in the yards-after-catch (YAC) category. As noted by former Patriots assistant to the coaching staff Michael Lombardi in his weekly column for The Athletic, the Patriots' D was 26th in YAC. Fundamentals of tackling are always a big part of training camp, and with this stat in mind, I wouldn't be surprised if Belichick drills down in that area.

8. Meyers highlights 'little things': Mohamed Sanu isn't the only Patriots receiver who has spent time this offseason working with Hilton Alexander, who runs Atlanta-based "Route King." Jakobi Meyers, who surprised last preseason by making the Patriots as an undrafted free agent, also hooked up with Alexander, where they focused on nuances at the position. "Jakobi is relatively new to the wide receiver position," Alexander said, referencing how Meyers switched from quarterback to pass-catcher at NC State in 2016. "He learns quickly and natural hands and route-running ability." Alexander made one other observation of note as it relates to Meyers' career: With more experience should come more confidence.

9. Belichick's honesty stands out: Andrews, the Patriots' starting center, was a guest on the "Athletes over Adversity" podcast, hosted by Jack Adams and Marco Sanchez. Andrews is a two-time Super Bowl champion who wasn't invited to the combine or Senior Bowl, and entered the NFL as an undrafted free agent. Andrews said on the podcast that the only coach he talked to before the 2015 draft was Belichick, who came to the University of Georgia to work him out. "He told me flat out they weren't going to draft me. As an athlete, that's not what you wanted to hear. But it was the truth, and he's been honest with me since that spring day at Georgia. That's one thing I can say about him and appreciate." One other thing I learned from Andrews: He said he hit a wall after 10 games of his rookie season and was having trouble processing things, which contributed to him being benched for Bryan Stork.