The Eagles are currently projected to be more than $40 million over the 2021 salary cap and are in the midst of a youth movement, so it's unlikely they'll be major players in free agency. But once the initial wave of big signings passes, they'll likely be keeping their eyes open for a veteran quarterback while searching for help at the skill positions and in the defensive secondary.

Here's what to expect from the Eagles when the NFL offseason hits high gear with the start of free agency on March 17:

Game plan: With Carson Wentz being traded to the Indianapolis Colts and Sudfeld poised to be a free agent, Hurts is the lone quarterback returning from the 2020 season. It's possible Philadelphia uses the No. 6 overall pick in April's draft on a QB to compete with Hurts, their second-round pick from a year ago. Either way, the Eagles need a veteran presence in the quarterback room. Jacoby Brissett makes some sense given his ties to coach Nick Sirianni from their time in Indianapolis together.

Game plan: Sanders is the lead back and Scott provides a nice change of pace. The Eagles could still use a bruising third back for short yardage and late-game situations. They showed interest last season in Carlos Hyde, who is once again a free agent.

Game plan: The Eagles shed salary by releasing Jackson and can do the same with Jeffery and Goodwin. What's left is a young, inexperienced group. Tyrell Williams was recently released by the Las Vegas Raiders. His best season came when Sirianni was his position coach with the Los Angeles Chargers in 2016.

Game plan: Ertz is expected to be traded or released. Goedert has the potential to to be one of the better tight ends in the game and will lead the charge for Philly. Rodgers has had multiple stints with the Eagles and could be brought back for another go-around. Trey Burton, of Philly Special fame, is a free agent after playing last season with the Colts.

Game plan: This feels like the year they finally part ways with Peters, who built most of his Pro Football Hall of Fame worthy résumé playing left tackle in Philadelphia. Dillard and Mailata will compete to replace him. This remains a strong group when healthy, though they're always looking to add and are in need of some longer-term solutions at multiple spots. A big key to success will be whether Kelce pushes off retirement for another year and returns to play. 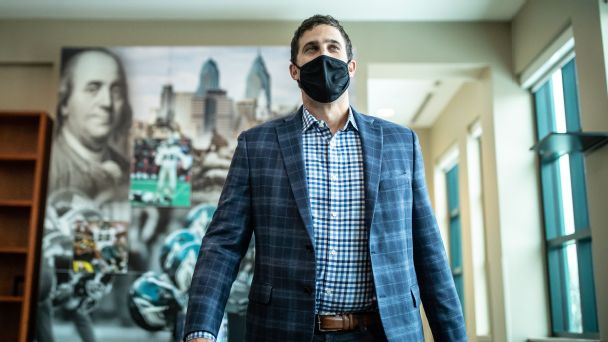 Game plan: Jackson could very well be another cap casualty and the Eagles also have decisions to make in respect to Super Bowl hero/team leader Graham and fellow edge rusher Barnett. If they free up a good amount of money along the defensive front, perhaps they replenish with a bit of a splash move given how highly they prioritize the trenches.

Game plan: As usual, this position is light. The Eagles haven't put many resources into linebacker and it shows. There has been some buzz Avery will move from defensive end to linebacker, which could help. Colts linebacker Anthony Walker is a free agent. Eagles defensive coordinator Jonathan Gannon comes from the Colts staff and should know plenty about Walker, who averaged 107 tackles over the past three seasons.

Game plan: Mills made some strides late in the season as he transitioned from corner to safety in 2020 and could be brought back into the fold. Philadelphia needs a steady corner opposite Slay. Xavier Rhodes, a free agent, had a bounce-back year under Gannon in Indianapolis last season and could be a solid option if the price is right.

Game plan: Elliott was shaky at times in 2020, missing a pair of field goal attempts under 30 yards. But he's been solid overall since joining the team in 2017 and carries a dead-cap hit of more than $5 million this season, strengthening the chances he will remain on the roster. The Eagles signed Siposs to a futures contract in January. He provides insurance should they end up parting with Johnston.