SANTA CLARA, Calif. -- Not long after the New England Patriots used a second-round selection in the 2014 NFL draft on him, quarterback Jimmy Garoppolo was walking around one of the NFL's rookie-focused events.

Garoppolo made the rounds to various displays set up by businesses who could one day want him to endorse their products. He stopped in the Under Armour and Adidas sections before coming to another room with an unmistakable emblem and an imaginary velvet rope.

Inside the Nike room was a section solely dedicated to the company's most famous brand, the one belonging to Michael Jordan and the logo that's instantly recognized as his.

"They weren't letting anyone back there," Garoppolo said. "I was like 'How do you get back there?' The one guy was like, 'It's a tough group to get into' and was kind of giving me a hard time and joking about it."

The moment confirmed something Garoppolo already knew: When his time came, he wanted to be a part of Jordan brand. Landing an endorsement with Jordan was, in fact, one of the first non-football related goals Garoppolo had when he entered the league. Now, more than four years later, it's a reality, as the San Francisco 49ers QB signed with the eponymous brand over the summer.

"Since I got in the league, it was one of my dreams to be with Jordan, and it came true," Garoppolo said.

Garoppolo's affinity for Jordan's brand began long ago, with Jordan the player.

Growing up in Arlington Heights, Illinois, a suburb about 25 miles northwest of Chicago, Garoppolo couldn't help but take part in the Jordan-mania that swept the city through the better part of the 1990s. He went to his first Bulls game when he was about 3, and though he doesn't remember attending, he has a photo as a reminder.

The Garoppolo basement doubled as a shrine to the family's favorite Chicago teams: the Bulls, baseball's White Sox and the NFL's Bears. Jordan was well-represented in multiple forms of memorabilia (one of his brothers owned the obligatory "Wings" poster), including 1998 championship hats featuring all six trophies that each member of the family wore proudly.

"If you looked at our house, you'd be like 'These guys are the biggest Chicago fans ever,'" Garoppolo said, laughing. "It was excessive."

Although he was born in 1991 and too young to remember much of Jordan's early championship runs, many of Garoppolo's earliest childhood sports memories are Jordan-centric. He counts Jordan's game and 1998 NBA Finals-winning jumper over Utah forward Bryon Russell as his favorite Jordan moment and cites Jordan's flu game as another.

"Ever since I was a little kid, he's been my favorite athlete," Garoppolo said. "It's pretty cool to be part of his brand now."

While Jordan's career was mostly over by the time Garoppolo was old enough to grasp its greatness, Garoppolo was able to relive many of the best moments, whether through YouTube or a trip with his grandparents to see "Michael Jordan to the Max" when it was released in IMAX in 2000.

As he grew older and became more involved in playing sports at higher levels, Garoppolo's appreciation for Jordan deepened beyond his feats on the court and into how he handled his business away from it. As a burgeoning football player at Rolling Meadows High, Garoppolo began to get some acclaim for his play as a junior. 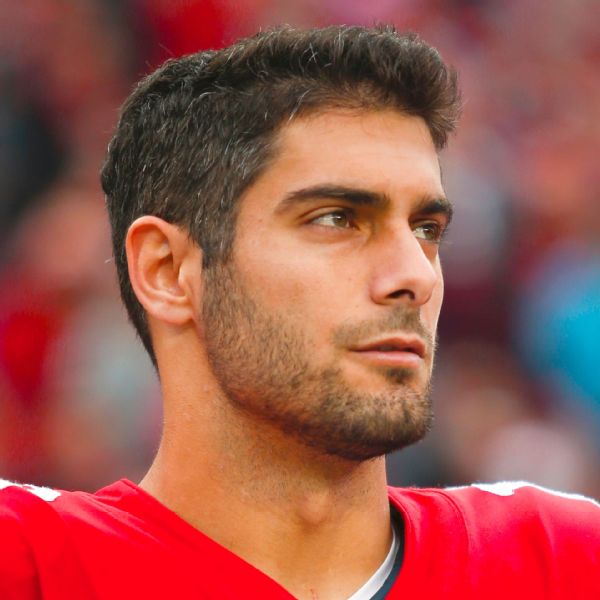 Along with that success, Garoppolo found himself facing cameras and voice recorders on a regular basis. By his own account, Garoppolo "sucked" at interviews. So his father Tony pointed him in the direction of Jordan, eschewing the YouTube dunk highlights in favor of Jordan news conferences.

"My dad told me, 'Jordan always takes a second, thinks about the question and then responds. Try doing that,'" Garoppolo said. "And he would show me things like that and it was just, he was very, very smooth with everything he did."

While Garoppolo has not yet met Jordan, he has spent time in his presence. When one of his older brothers played one of Jordan's sons in basketball, Garoppolo remembers how Jordan walking into the gym altered the entire atmosphere.

"He just had a way, an aura about him that just stood out," Garoppolo said.

While there was no shortage of Jordan merchandise in the Garoppolo house, shoes were rarely part of the equation. With four boys to buy for and the high cost of Jordans, Garoppolo said he only owned the one pair his uncle bought for him when he was in elementary school.

Now that Garoppolo is part of the Jordan family (and signed one of the most lucrative contracts in NFL history in February), his collection is quickly growing. He counts the Jordan 3s as his favorite pair so far, with the 11s not far behind.

Should Garoppolo need some guidance on getting up to speed, there are no shortage of experts in the Niners locker room. Wide receiver Marquise Goodwin is one of the team's biggest collectors, with an extensive stockpile of Jordans. He has already offered Garoppolo advice on which shoes work and which ones don't.

"I think he's got a lot of swag, but when it comes to Jordans, he's not very knowledgeable about these J's, so I have got to put him on game," Goodwin said. "He needs to get all the exclusives. You cannot be wearing team J's out here. It's got to be all retros. As long as it says retro in front of that number then you're good."

Since he arrived in the Bay Area in October of last year, Garoppolo has been reticent to talk about anything aside from football. In a recent interview, it was clear that the deal with Jordan was big enough to him to make an exception.

Still, Garoppolo said there are no current plans to take part in any sort of major marketing campaign or to suddenly approach Peyton Manning-level pitch-man status. As he has maintained all along, Garoppolo wants to prove himself further before he worries too much about building his own brand.

"[Jordan] is a credit to the idea that you have to live a different lifestyle [to be great]," Garoppolo said. "You're sacrificing things in order to put in time to your profession. Whether you're used to it or not, that's just what it is as an athlete."

Which is why, when Garoppolo looks at his feet and sees that famous Jumpman insignia, he doesn't see validation that he has arrived. He sees just how far he still has to go.