As we all know, UCLA gymnast Katelyn Ohashi nearly broke the internet last year with her incredible floor routine. The video of her perfect 10.0 in the second meet of the 2019 season amassed more than 117 million views by the time the NCAA Championships rolled around. 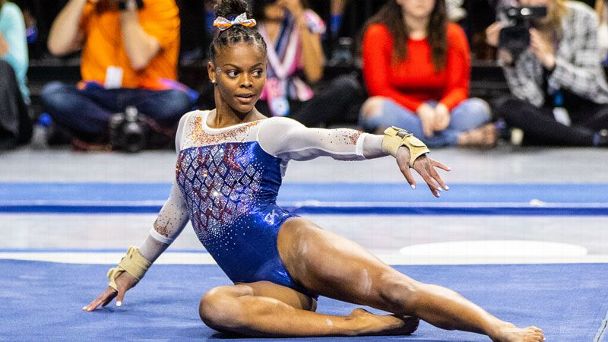 While Ohashi's routine will forever live in our hearts and on the internet, she has graduated -- and left a split-leg, double-layout-sized hole in NCAA gymnastics.

Thankfully, there are other gymnasts with stellar routines that might be able to help fill that void. Although the internet is a fickle and impossible-to-predict place, here are some of our best guesses as to who will follow in Ohashi's highly viewed footsteps in the 2020 NCAA gymnastics season:

Ohashi and legendary coach Valorie Kondos Fields are both gone, but Margzetta Frazier proves that UCLA's famed floor routines remain in good hands. The sophomore has stepped in as an all-arounder and is poised for a breakout season -- and when you watch this ridiculously entertaining performance, you'll see why. She combines her incredible athleticism with fun choreography, joyful charisma and a well-known medley of hits from the 1970s (starting with James Brown's "Get Up Offa That Thing"). As UCLA knows, that's a recipe for success -- and views. Lots and lots of views.

Trinity Thomas had one of the most talked about floor routines of the 2019 U.S. national championships (which helped secure her spot on the national team for the fourth straight year), and she did the same in her 2020 opener for Florida. Brimming with confidence and the often elusive grace and power combination, she started her sophomore campaign with the highest score on the event of the season this far (tied with UCLA's Kyla Ross), with a 9.975. She told ESPN.com ahead of the season that she is hoping to score a 10.0 this season, and with this routine, it seems entirely possible that she will do just that.

Maggie Nichols has been arguably the best gymnast in the country throughout her collegiate career, and she won the floor title in 2018, but that doesn't always translate into viral success. For her senior season, though, Nichols very well could achieve that as well (and, of course, still top the rankings in the all-around). Exuding confidence with every leap, flip and sassy, mock-driving hand movement of this new routine, Nichols makes it clear that she is giving her final season everything she has and cementing her status as one of the best to ever do it.

Senior Sabrina Vega's floor routine is the highlight of any Georgia meet. With her gorgeous form and entertaining dance, there isn't a person in the arena who isn't watching her every move. A 2011 world champion with the U.S. team, Vega has spent three years being the rock and competitive leader of the GymDogs -- and her dance skills and overall presentation are the best in the NCAA.

On Friday, on Derrian Gobourne's 20th birthday, she brought down the house with her routine, earning a 9.95 for the floor title and helping Auburn beat a higher-ranked Alabama team in front of a sold-out home crowd. From the moment she walks out onto the floor -- with a beginning unlike any other gymnast -- Gobourne's sass and incredible power make her routine one to watch over and over again.

Freshman Helen Hu has performed on floor only once so far -- and her score was not a 9.9 or even a 9.8, so it was easy to miss it. But once she perfects this routine, it should get a lot of attention. In it, she has bits of choreography different than that of anyone else in the NCAA. Ever seen an illusion down into a split? Want to see an Olga Korbut-esque, back-breaking dive? A Valdez that looks ... impossible? This routine has all three.

Bonus: This gives us an excuse to call out her impeccable beam set, which earned a 9.95 last week with the most creative dismount combo in the sport. (If you're a numbers-should-add-up kind of person, this is our No. 6 and 7. Yes, we cheated the list for her beam routine. It's necessary.)

Billie Eilish's "Bad Guy" was one of the biggest songs of 2019, so it really isn't a surprise that it's in so many routines this season. It seems highly unlikely that multiple routines with the same music will go viral this season, but these three all have the potential to do so. Also, they will all have you whispering "I'm the bad guy" by the end (duh).

Lynnzee Brown, the 2019 NCAA floor co-champion, has helped propel her somewhat unheralded squad to unprecedented ranks and will only continue to do so during her junior season. She has earned a 9.95 and 9.925 in her first two competitions of the season with this routine, due to her nearly flawless execution of big skills (including an enormous double layout and an often-stuck double pike) and a ton of personality. It's hard to imagine that she won't get a 10.0 with this in the near future.

Sometimes overshadowed by her more well-known teammates, senior Gracie Kramer was consistently one of the top floor workers for UCLA last season. She finished in fifth on the event at the 2019 NCAA Championships, and her 2020 floor routine contains similar bold, unorthodox and slightly creepy choreography. She's a bad guy -- and really commits to it.

We'll admit, we have a soft spot for Anastasia Webb. She is one of the top gymnasts in the country, but on a team with Maggie Nichols, that can go unnoticed. Now a junior, her latest floor routine draws you in even more than any other she has competed up to this point.