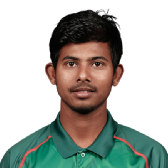 Mosaddek HossainBangladesh
Final, Ireland Tri-Nation Series at Dublin, May 17 2019
Bangladesh won by 5 wkts (7b rem) (D/L)
Player of the Match

Mosaddek Hossain's blinder, the perfect follow-up to the start provided by Soumya Sarkar, handed Bangladesh their first-ever ODI final win, as they chased down 210 inside the stipulated 24 overs, which was set after West Indies reached 152 for 1 following a five-hour rain break.

Mosaddek raced to his fifty off 23 balls, striking five sixes and two fours in his unbeaten 27-ball 52. He took charge in the 22nd over, with Bangladesh still needing 27 from 18 balls, going after left-arm spinner Fabian Allen as he hit him for three sixes and a four. Mahmudullah, his partner at the crease at the time, struck the winning runs in the next over with a rasping cover drive, with seven balls remaining.

West Indies were poor in the field for most parts. They were sloppy at the boundary and the bowlers conceded a number of wides. Their strong top-order contribution was once again let down by their bowlers and fielders.

They couldn't contain Soumya, who made 66 off 56 balls at the top of the order with nine fours and three sixes, and made the job easier for the rest of the line-up. Soumya began the chase with two fours over cover off Ashley Nurse in the first over. Nurse then dropped Tamim Iqbal off Kemar Roach in the third over, a sitter at short third man. Soumya, having gained the strike from the resultant single, slammed a stylish six over wide long-on and two more fours to take 17 off the over.

It was Shannon Gabriel who pulled things back by dismissing Tamim and Sabbir Rahman in the sixth over. But this hardly affected Soumya's flow as he struck Jason Holder for two fours immediately, and then went on to reach his fifty off 27 balls, the fourth-fastest by a Bangladesh batsman.

With Mushfiqur Rahim also motoring along briskly, Bangladesh reached their highest-ever score at the end of the first 10 overs of an ODI innings. Soumya, however, lost his wicket in the 12th.

Mushfiqur's quickfire 36 off 22 balls, which included two sixes, ended in the 14th over when Raymon Reifer pinned him in front. After Mohammad Mithun fell two overs later, the chase got tense, with Bangladesh needing 67 off the last 50 balls. But Mahmudullah and Mosaddek took them home with their unbroken 70-run stand for the sixth wicket.

Sent in to bat, West Indies had moved to 125 for no loss in 20.1 overs, thanks to their opening pair of Shai Hope and Sunil Ambris, before rain stopped play for nearly five hours. Ambris and Hope had both reached their fifties before the rain break, and had looked in full control after surviving a number of plays and misses in the first nine overs. It wasn't until the third over that Ambris went big, when he drove Mashrafe between extra cover and mid-off for the first four of the innings. Play resumed at 5.30pm local time, with the match now shortened to 24 overs a side, and West Indies added 21 runs in their remaining 3.5 overs.