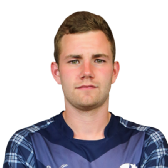 Matthew Cross produced his second half-century of the tournament and blunted Oman's left-arm-swing threat of Bilal Khan to put Scotland on top in their fifth-place playoff at the men's T20 World Cup qualifiers. The Scotland wicketkeeper-batsman's unbeaten 61 took his side across the line with an over to spare chasing 167 in a five-wicket win. Cross entered at the end of the first over after Bilal had claimed captain Kyle Coetzer for a duck driving to point, but was rarely flustered, striking eight boundaries in his knock with half of them coming against Bilal.

On the traditionally high-scoring Dubai ground, Oman's target looked slim once Cross got going. After George Munsey pulled and drove Fayyaz Butt for a pair of boundaries in the second over, Cross finally faced his first delivery in third against Bilal and was off the mark immediately, cutting him behind point for four, and continued to time the ball sweetly throughout his innings.

Munsey fell to his favorite shot, defeated by a change of pace from Aqib Ilyas' offspin to miss a reverse-sweep, to be dismissed for 17 in the fourth over. Calum MacLeod fell to the orthodox sweep, going too far across his stumps and winding up being bowled behind his legs by Khawar Ali in the eighth to make it 46 for 3. But even though the asking rate was creeping towards ten an over, Cross never lost his cool.

After Richie Berrington fell for 14 in the 11th over to make it 77 for 4, Cross teamed with Michael Leask for a 61-run stand that kept the required rate well in check. Leask was the aggressor, firing a pair of sixes off the spin tandem of Khawar and Jay Odedra. With five overs left, Scotland needed a very manageable 43. Leask fell driving Bilal to long-off in the 17th leaving Cross and Tom Sole to get 30 off 21 balls.

Cross brought up his half-century off 40 balls to start the 18th pulling Fayyaz fine behind square. Sole then reverse-scooped Bilal over third man off the third ball of the 19th to bring the equation down to a run a ball. After a single put Cross on strike, he flat-batted Bilal over mid-on, and then sliced a yorker over backward point for consecutive fours to end the game.

Earlier, Alasdair Evans led the way with the ball to help restrict Oman to a chaseable total with his three wickets after Oman chose to bat. Evans struck in the third for the first wicket, getting Jatinder Singh to push at a good length ball for an edge behind. After Khawar's brisk knock was ended miscuing a reverse sweep off MacLeod to backward point, Evans struck again in the 11th as Zeeshan Maqsood checked a flick and produced a leading edge high over the pitch for Evans to claim. He came back for one more at the death as Suraj Kumar slapped a length ball to mid-off. It came one ball after he ran out Mehran Khan trying to steal an extra run off a bouncer that was called a wide.

Scotland are now home for a month before returning to the UAE in December to play a Cricket World Cup League Two ODI tri-series against UAE and USA. Oman host their first League Two tri-series in January against Namibia and UAE.