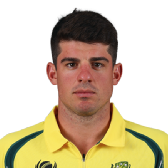 Victoria gave themselves a chance to rescuing a draw against New South Wales with their top order putting in a stubborn display in the second innings led by Nic Maddinson's half-century.

They had conceded a lead of 174 on a day interrupted by light rain during the morning session but by the close Maddinson and captain Peter Handscomb had taken them to within sight of a lead.

Maddinson and Marcus Harris added 73 for the first wicket before Nathan Lyon broke through when Harris lofted a catch to point as he tried to go down the ground. It was Harris' third dismissal in four innings against Lyon and another start not converted by the Test opener.

The New South Wales quicks went at both Maddinson and Handscomb with the short ball but the pitch at Bankstown Oval does not have much pace in it.

Earlier in the day, New South Wales' last three wickets had added a further 60 to the total either side of the stoppage for rain. James Pattinson removed Trent Copeland and Pat Cummins in the space of four balls before Victoria were frustrated by a final-wicket stand of 37 between Lyon and Harry Conway.

If Victoria can save the game on the final day it would represent a good stint in Sydney having secured victory at the SCG last week before they were forced to extend their stay with this match relocated from Melbourne due to Covid-19 border restrictions.