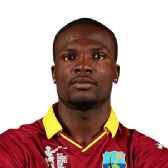 11:11pm And that is all from us! Thanks for coming and we'll see you tomorrow.

Sammy: Think we were always playing catch up. We had our plans and we didn't respond well enough. I agree with Jason, the pitch wasn't as true. [On their batting] It's just about execution. In the nets they're committing to strokeplay, we just have to bring that out to the middle and have less than 24 hours to turn it around.

Holder: Extremely pleased. It was a good game. I don't think as true a pitch as everyone thought it would be. We slowed down in the middle, credit to the Zouks.[Greaves] Good to see young players pulling their weight, we've seen in franchise cricket around the world the local players need to. [On the extra fielding session last evening] It's funny, JP Duminy was the best fielder last night at the session, but he put one down today. Just how the game goes sometimes. It can be a challenge to field under lights.

Carter: Always thrilled to get runs. Decided to back myself, JP gave me confidence. [The catch] Catches like that are always tough. Doing a lot of work with Trevor Penney, as you can see my fingers are all mashed up. The hard work has paid off. Was not too pleased about the late training session yesterday but you got to do what you got to do, and the results showed tonight. I was thinking you gotta go, you gotta go, and then it stuck!

Jonathan Carter is the Man of the Match.

11:55pm Obed McCoy is injured and will not be coming out to bat, so that is it. Barbados Tridents have won by 71 runs. A comprehensive defeat for the home team after they came back so strongly with the ball to ensure a reasonable target on a good pitch. But right from the start of the chase, they looked too frenzied. Three down in three overs, they had lots to do. With Jonathan Carter's flying catch to dismiss Daren Sammy, it became near impossible. All the bowlers got into it, Carter even added a run out to his haul, and a huge win margin for Tridents at the end of it all.

14.5
W
Lamichhane to Viljoen, OUT, splits the stumps. Googly, tossed up at a length outside off. Gets low and gets his leg into the leg side to try and play the slog sweep. Missed it by quite a distance and that clatters into middle stump

13.6
0
Lalor to Fawad Ahmed, no run, slower bouncer up at the ribs. Looks to flick but cops that on the body