The 2020-21 Premier League fixture list has been unveiled. Strap yourselves in, because this is going to be one hell of a ride.

It's non-stop after the first ball is kicked on the weekend of Sept. 12, with only four spare midweeks through to the Champions League final on May 29. And all of those midweeks will be needed for rearranged Premier League fixtures.

With the first month of the season lost due to the coronavirus pandemic, and Euro 2021 beginning on June 11, Premier League clubs -- especially those in European competition -- face a relentless schedule.

The seven teams in Europe will not have a possible spare midweek until the Carabao Cup quarterfinals on Dec. 22, with the Champions League and Europa League being played over six consecutive midweeks dates for club football from October through to December.

With the Carabao Cup early rounds being played early, the 13 clubs not in Europe won't have any midweek football from the start of October through to the midweek of Dec. 15. And that could prove telling in the second half of the season when fatigue may set in.

It's going to be especially tough on Tottenham Hotspur, who will have to negotiate three qualifying rounds of the Europa League to get to the group stage and have to hope they don't face any long-haul trips to the likes of Azerbaijan and Ukraine.

Here, we set out how the season will shape up. 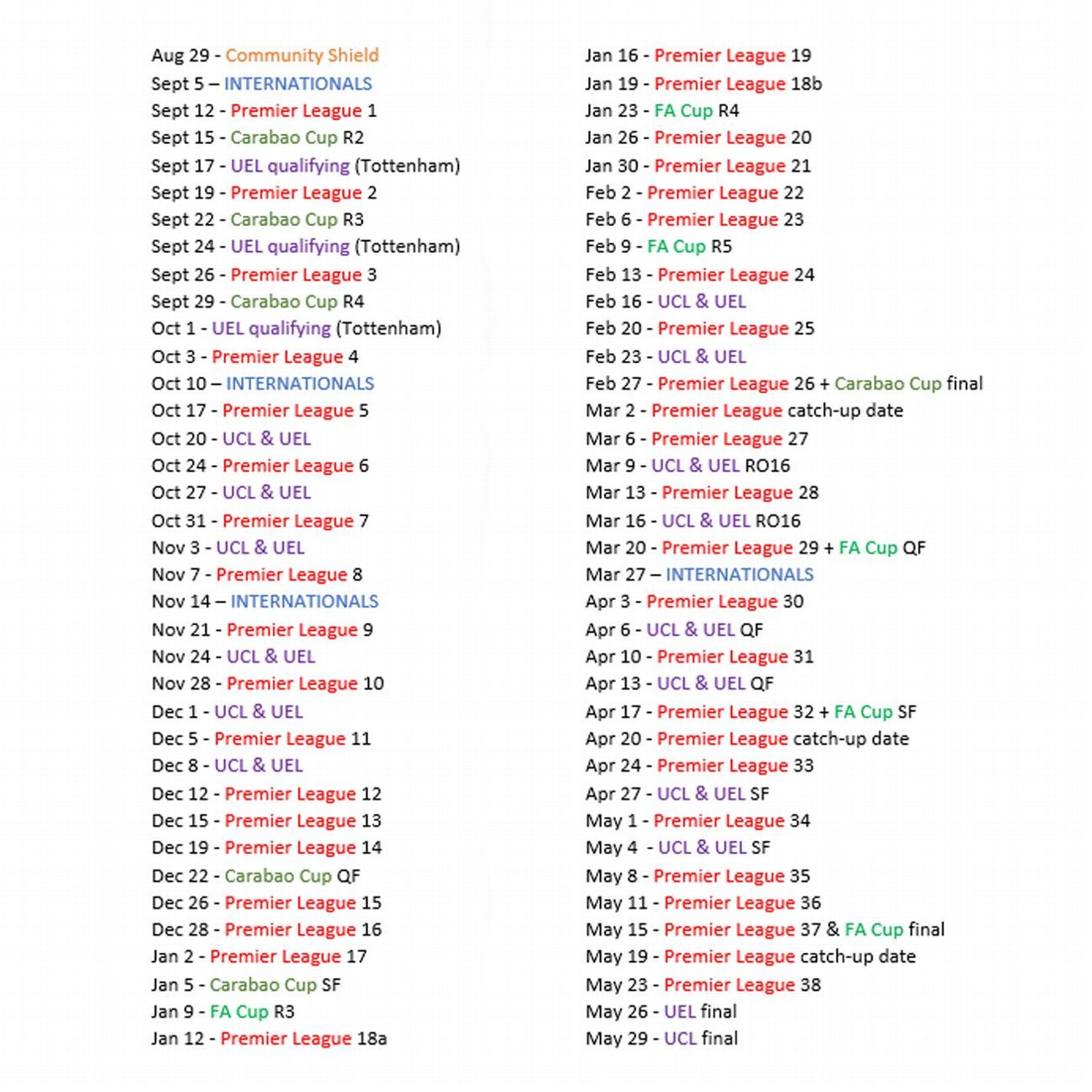 How many rounds did Premier League need to reschedule?

The Premier League effectively needed to find space for five rounds of games, four that were due to be played in August plus one at Christmas due to the way the dates fall compared to last season.

How has the Premier League made up these rounds?

1. The season will run a week later. While the FA Cup final will also be played on Gameweek 37, the following midweek is opened up for any catchup games to be played, too.

2. A Premier League round is being held through the midweek of Jan. 26 and 27. These dates would have been reserved for the second leg of the Carabao Cup semifinals, which will now be one-legged this season.

3. The winter break has been dropped. A split gameweek (18a, 18b) will take place in January, spread across two midweeks. This creates an additional weekend for matchweek 24 in February. The midweek reserved for 18b has been left free in the published fixture list.

Does this mean there are more midweek rounds?

The 2020/21 Premier League season will comprise:
- 32 weekends, five midweeks and one bank holiday.

The Premier League's TV deal had one split week for broadcasting, which was part of the winter break and allowed all 10 matches to be shown live in the UK. By moving the "winter break" to consecutive midweeks in January, likely with staggered kickoff times, it allows that contract to be fulfilled.

While the Premier League reserved the midweeks of Jan. 12 (18a) and 19 (18b) for this, the published fixture list has at present only listed all 10 fixtures in the midweek of 18a. Games will eventually be moved from the midweek of Jan. 12 to 19 to ensure the TV contract is honoured.

Will teams still be allowed to make five substitutions?

No, Premier League clubs voted against this, so only three substitutions will be permitted.

How has the FA Cup changed?

Apart from the abolition of all replays for this season, little is altered. The final will take place a week earlier and there will be Premier League games on that same weekend, for the first time since 2013.

How will the Carabao Cup work?

The 13 Premier League clubs not in Europe will join in the second round in the week of Sept. 15. The other seven clubs join the following midweek, in round three.

By the time the October international break arrives, there will be just eight teams left in the Carabao Cup, and seven games to play. The pressure on the fixture list from the Carabao Cup is not as great as might be perceived.

How are Tottenham going to play in the Carabao Cup?

Tottenham Hotspur join the Carabao Cup the week of Sept. 22, the same week they are due to play a Europa League third qualifying round tie. They should also be in European action the following week, reserved for the fourth round of the Carabao Cup.

This has yet to be confirmed, but it seems likely that Spurs will have to submit an under-23 team for their first two rounds of the Carabao Cup, as Liverpool did last season when they were double booked with the Club World Cup. Their kids lost 5-0 to Aston Villa in the quarterfinals, however.

What about Man City and Man United starting late?

Premier League teams were promised a minimum of 30 days break before starting the new campaign. With Man City knocked out of Europe on Aug. 15 and Man United on Aug. 16, it means both miss the opening weekend of Sept. 12 and 13.

Manchester City should host Aston Villa, with Manchester United away at Burnley on the first matchday. These games will now both be moved, with the new date to be confirmed by the Premier League.

Both Aston Villa and Burnley will be in Carabao Cup second-round action in the immediate midweek, so the game cannot be played then. City and United then join the Carabao Cup the following midweek in round 3. It is possible the games could be arranged at short notice for the midweek of Sept. 29 if both sides are knocked out of the Carabao Cup early.

If City and United get through to the Carabao Cup quarterfinals, they will not have a spare date in 2020 with all midweeks taken up by European fixtures, a midweek round of Premier League games and the Carabao Cup. They could hope to use the empty Champions League midweeks in February and March, but if either side drops into the Europa League there would be no spare date. They could also play in their free date for 18a or 18b.

Wolves and Chelsea also petitioned to have the first weekend off, having played European fixtures in August. They have been granted two days' grace, starting on Monday night against Brighton and Sheffield United respectively. Of the four teams, only Chelsea will not have a Carabao Cup second-round tie that same midweek.

Yes, UEFA has relaxed the rule that prevents top-flight domestic football from being played at the same time as Champions League and Europa League games. However, this doesn't offer a solution if a team that is required to play a rearranged fixture is in European competition.

Why are there four international breaks?

There are eight international match dates across the three breaks in 2020 -- 2 in September and 3 in each of October and November. There are six rounds of UEFA Nations League fixtures, which will help form the ranking for the World Cup qualifying draw on Nov. 29 and supply two teams for the UEFA World Cup playoffs. There are also two dates for the Euro 2020 playoffs, when other nations can play international friendlies.

Could anything else go wrong?

If a club gets to both the FA Cup and the Carabao Cup final, and reaches the semifinals in Europe, there are not enough spare midweeks to catch-up on missed Premier League fixtures. This is usually the case, and Man City were on a fixture collision course last season before the coronavirus pandemic paused football.

Also, with such a tight schedule, there is little room for manoeuvre if a harsh winter leads to numerous match postponements.

And, of course, the coronavirus could make the schedule impossible again.

At least there can be no complication over the UEFA Super Cup and the Club World Cup, as no Premier League team managed to reach one of the European finals.