With the January transfer window open, several top players are being linked with moves this month or for next summer. We're profiling some of the best, including a breakdown of the player's strengths and weaknesses, the latest reporting on his transfer status and a round-up of interested teams, with the likelihood of a move and where the best fit might be.

Next up, a Dortmund winger who has every top club in Europe chasing his signature ... 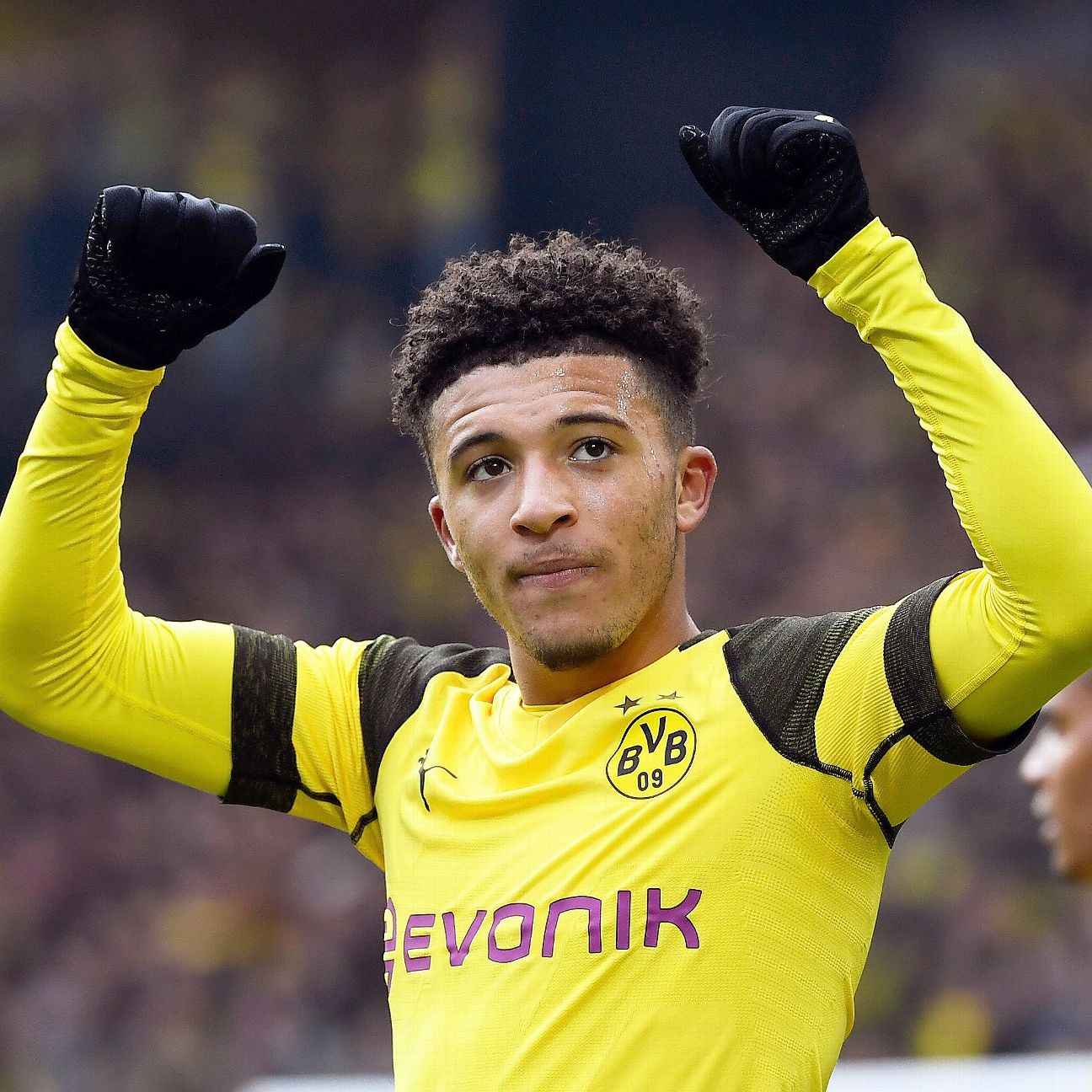 A flying winger with plenty of pace and excellent dribbling skills, Sancho has been racking up the goals and assists in the Bundesliga since his arrival from Manchester City in 2017. He is at home on the left side of a forward line but perhaps needs to work on his weaker left foot if he is to continue playing there.

"We can play very active football because we have players like Jadon," Dortmund coach Lucien Favre said. "He can play short. He can play long. He can play with one touch. He can dribble in front of the goal. He can use his head. He destabilises the other team."

Leave it to teammate Thomas Delaney to sum up Sancho's potential: "I would almost call it a privilege to watch Jadon every day in training. It's spectacular. He does things with the ball I've never seen before. If I tried to do what he does, I'd hurt myself."

According to Transfermarkt, Sancho's market value was just €5 million when Dortmund signed him for around €7 million from Man City in 2017, when he was 17. Within a year, that was up to €45 million, and now clubs will have to spend more than €100 million if they want to get their hands on him. City are owed about 15% from any deal, and sources said the Premier League club does not have a first right of refusal, as has been reported in some outlets.

SOURCES TELL ESPN FC: Manchester United manager Ole Gunnar Solskjaer is set to continue his policy of targeting British players next summer, and United have not been put off pursuing the 19-year-old, despite his signing a new contract at Dortmund in August 2019. The rest of Europe's elite teams are also monitoring him, with Dortmund ready to listen to offers after a few months of turmoil for the player.

Sancho is a player Manchester United like and, judging by some of the problems they have had this season, one they need. The 19-year-old fits the bill for Solskjaer, who is trying to build a squad around a core of young, exciting, British players.

Sources have told ESPN FC that there is a belief at Old Trafford that Dortmund will listen to offers after signing striker Erling Braut Haaland from FC Salzburg, and United will certainly be among the interested parties when the bidding starts. The problem, though, is that they expect Chelsea and a host of top European sides to also be in the running. The issue then becomes whether they can convince one of the best young players in the world that Old Trafford is the place to reach his potential and win. -- Rob Dawson

Although a move would not make sense for either party in January, plenty could change in the near future.

For one, Sancho has the chance to make an impression on PSG when they meet Dortmund in the Champions League knockout stages. Also, with Neymar's future in Paris anything but certain, Angel Di Maria getting older and Kylian Mbappe looking for a central role, options could be needed out wide sooner rather than later. In the event of Neymar's return to Barcelona this summer, Sancho could prove to be a smart addition on and off the pitch with a growing English-speaking fan base.

The winger's recent struggles in Germany suggest that he might not be ready for the pressure that would come with playing for PSG, with or without Neymar, but he would be a good addition on his best form with plenty of promise for the future. -- Jonathan Johnson

With money to spend and signings required after having their FIFA transfer ban lifted, Chelsea and Sancho would seem an obvious fit. The England forward would add to the youthful nature of Frank Lampard's squad at Stamford Bridge and boost their developing English core at the club. But while Chelsea have long-standing interest in the player, who grew up as a Chelsea fan, they have priorities elsewhere in January.

Callum Hudson-Odoi, Christian Pulisic and Tammy Abraham have shined for Chelsea up front this season, so Lampard is more likely to spend his time looking to bolster his defensive options, particularly in the full-back areas. But if Pedro and Willian don't sign new contracts by the summer, there will be a vacancy on the wings. -- Mark Ogden

Barcelona have followed Sancho's progress but are unlikely to be among the front-runners. Although the scouting reports are positive and there's a belief that Sancho could be one of the world's best forwards over the next decade, there are a couple of complications for the club. Last summer's €120 million signing of Antoine Griezmann, a desire to bring Neymar back, an approach for Dinamo Zagreb and the Spain winger Dani Olmo and the need to sign a central striker as a long-term replacement for Luis Suarez mean wide players are not a priority.

The emergence of Ansu Fati has also reduced Sancho's chances of a move to Camp Nou. However, it isn't completely off the cards, and if Ousmane Dembele were to leave for a sizable sum, the Spanish champions could turn to the England international. -- Sam Marsden

Liverpool have the money to strike a deal for Sancho this month, but a move to Anfield in January could work against the player's hopes of making the starting XI in Gareth Southgate's England squad at Euro 2020.

A summer move is more likely if Klopp decides to rebuild his squad and sign Sancho as a long-term replacement for Salah. But right now, Sancho to Liverpool doesn't stack up. -- Mark Ogden

Real Madrid have also monitored his progress at Dortmund, but sources have told ESPN that there is no firm interest at this time.

Zinedine Zidane is spoiled for choice when it comes to wide forwards. Eden Hazard, who is expected back from his ankle injury this month, and Gareth Bale, despite all his on- and off-field issues, remain the nominal first options. Brazilian teenagers Rodrygo and Vinicius Jr. continue to develop and have been regularly involved this season, and sources said Real are even in talks about a €30m deal for Flamengo's 17-year-old forward, Reinier.

Lucas Vazquez is a dependable, hard-working alternative, and Marco Asensio will eventually return from the cruciate ligament rupture he sustained last summer. There's just no need to spend big on another wide man. -- Alex Kirkland

City know all about Sancho, having seen him develop in their youth academy before selling him to Dortmund for a pittance, and there is still a certain degree of unhappiness about the way he left the club in 2017. A move for the England winger has not been ruled out, but neither is he a priority while Pep Guardiola looks to strengthen the centre of his defence.

City's attack will look different next season when David Silva departs, but whether they are in the market for a winger will depend heavily on what happens with Sane. Bayern Munich have been very public about their interest in the Germany international, but there is still hope that he can be convinced to stay, and if he does, there will be no return for Sancho. -- Rob Dawson

When Haaland announced that he had signed with Borussia Dortmund for €20 million this month, social media was filled with comments congratulating Bayern Munich on their capture of the Norway international. It's a running joke that Bayern sign any player they want from their Bundesliga rivals, and over the past decade, three Dortmund stars made high-profile moves from the Westfalenstadion to the Allianz Arena. Mats Hummels and Mario Gotze have since returned, and the free transfer of striker Robert Lewandowski has to be among the greatest deals of all time.

Sancho could easily become the next player to follow the well-trodden path to Germany's south. Yet this would come as a surprise, as Bayern Munich have a choice to make. Wait for the man ESPN sources have said is their top target, Man City's Leroy Sane, or spend on Sancho?

Bayern already have Kingsley Coman and Serge Gnabry on their books, and they are keeping an eye on Bayern Leverkusen midfielder Kai Havertz and have the option to sign Philippe Coutinho from Barcelona for €120 million once his loan spell ends this summer. If they choose either of these two, they wouldn't have the funds for another big signing, and they also need to improve their defence. -- Stephan Uersfeld

Sancho has been a revelation at Borussia Dortmund. Buried in the academy for the first couple of months, he burst onto the scene in early 2018 and has not looked back.

By and large, he is the ideal Dortmund player. A relative unknown when he signed at a young age, the winger increased his worth tenfold in two years.

Dortmund are a club that rely on constant transfer profits to keep the gap to the European superclubs at a minimum. They play one financial tier below the likes of Bayern Munich, La Liga's top clubs Barcelona and Real Madrid, state-backed French powerhouse Paris Saint-Germain, the English top teams Liverpool, Manchester United, City and Chelsea, and even Juventus in Italy. Indeed, the club's business model the past few years has seen them sell players when their stakes were at the highest. Sancho is under contract until 2022, and the summer of 2020 will be the perfect time to watch a bidding war unfold for the 19-year-old. One year later, and the team would be under increasing pressure to cash in before losing him for nothing.

Dortmund will want more than €100 million after tax, and unless CEO Hans-Joachim Watzke gets something in that region, Sancho could stay at the Westfalenstadion beyond the summer. But it's extremely unlikely. -- Stephan Uersfeld