MIAMI -- By the final time Giancarlo Stanton put on a Miami Marlins home uniform last season, he was worn down, beaten up, drained.

But that wasn't all.

At what would prove to be the end of a decadelong roller-coaster ride with a foundering franchise, Stanton also felt enriched, wiser and more complete than he was when he started his Marlins journey as a 17-year-old second-round draft pick in 2007.

A revolving door of Marlins managers -- eight in Stanton's eight seasons with the big league club -- made it particularly challenging to feel connected to the organization, even as he was stamping his place in the team record books and launching a barrage of jaw-dropping home runs. Still, the joy and the pain of his time in Miami -- plus support from his father, his agents and a small but dependable collection of teammates and assistant coaches -- taught him valuable lessons, he says.

A whole bunch of them, apparently.

"Too much to tell in a freaking story, man," Stanton says, grinning. "Just growing. Life. You can't explain becoming a man in a few words."

Now 28, Stanton is a key cog in the New York Yankees' lineup. As he returns to Miami this week to face his old team for the first time, Stanton said he has no hard feelings about how his days with the Marlins went. And nine months after he was traded away, Stanton wants to make one thing clear: He wants only the best for his old club.

"I want things positive down there. Hopefully it'll start to happen," Stanton says. "But everyone always associates me with negativity there. I'm sick of that, and done with that.

"This is a great city. It's got great potential. I hope it switches."

Under new Marlins CEO Derek Jeter, a top-to-bottom rebuild has begun. Among the controversial changes made by Jeter, the former Yankees shortstop: completing the December trade that dealt Stanton, the reigning NL MVP, to the Bombers for Starlin Castro and a pair of minor leaguers.

"I want things positive down there. Hopefully it'll start to happen. But everyone always associates me with negativity there. I'm sick of that, and done with that. This is a great city. It's got great potential. I hope it switches."

Giancarlo Stanton on the Miami Marlins

"They've got some work to do, but it kind of sucks just talking to people, and it's always this, 'Well, you know how [bad] they are,'" Stanton says. "I want it to be different down there and have them be pushing forward for once and not be idle."

When Stanton steps to the plate Tuesday, he'll be hoping for a warm reception.

"It should be uplifting," he says. "I mean, I did nothing but try as hard as I could down there and stick with them as long as I could."

"I'm sure they'll fill the place up pretty well," Boone says. "Obviously just the Yankees alone usually do pretty well, but when you add Giancarlo, one of the superstars of the sport that's been so big there, I would imagine there will be a little buzz around it."

Miamians we spoke to expect the same. 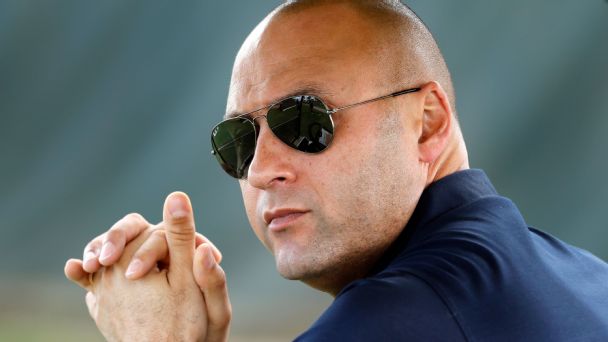 A champion in New York, Jeter didn't come to Miami to lose. Here's an inside look at how he plans to build a winner while learning on the job in South Beach. Jerry Crasnick »

Fireworks certainly could come the next two days, as Stanton sits just short of a round milestone.

At 299 career home runs, he's one shy of becoming the fourth-fastest player in baseball history to hit No. 300. With a home run in his 1,110th career game Tuesday, Stanton would reach 300 faster than former Yankees slugger Alex Rodriguez, who took 1,117 games.

Home runs at Marlins Park were a regular occurrence for Stanton, who has hit more there (112) than he has anywhere else. He also hit 22 at the Marlins' previous ballpark, SunLife Stadium, in his first two years in the majors; that's tied with Citi Field for the second most he has hit at any stadium.

Stanton also has been on a particularly torrid homer-hitting pace of late, crushing eight in his past 19 games. While he's just a tick behind the 18-homer pace he had last August with Miami, he's making his hits count. In the 23 games since fellow power hitter Aaron Judge went on the disabled list July 27 with a chip fracture in his right wrist, Stanton has batted .300 and hit nine home runs with seven doubles, 21 RBIs and a 1.053 OPS.

"He's been huge for us, especially since Judgey went down," Yankees center fielder Aaron Hicks says. "We needed somebody to step up, and we've kind of come together and kept going, trying to find different ways to win ballgames."

After struggling early in the season, Stanton has been among the Yankees' most consistent offensive weapons.

"I knew I had a big hole to dig out of," Stanton said after hitting his latest home run Saturday. "But I don't ever doubt my craft or my work. Sometimes in this game, [it] takes longer than you expect or want."

Ask Stanton to describe his time in South Florida, and he'll say it was incomplete.

"Usually legacy has to do with winning, in my view," Stanton says.

Even with a few other talented young outfielders, some up-and-coming middle infielders and the late ace Jose Fernandez, the Marlins teams from 2010-17 failed to make the playoffs -- or post a winning season, for that matter.

Which is enough for some locals to agree with Stanton's take on his legacy.

"I don't know if he has a legacy like a Jeff Conine and some of the older Marlin players that were around back in the day that won the World Series," says Erick San Pedro, the owner of a baseball training facility near Coral Gables, Florida. "Maybe if he had the chance to, there would've been more of a legacy, but definitely he leaves the Marlins as one of the best power hitters in the league."

"Although his legacy was a lot shorter than a lot of people would've liked it to be, he kind of gave us hope," says Kristian Navarro, a college baseball player and South Florida native who trains under San Pedro. "In a clutch situation, we always came to Giancarlo. 'Oh, Giancarlo's going to hit a home run, he's going to hit a bomb.'

Now it's time for the Marlins to do something. As their rebuild continues, Stanton will be keeping a close eye on how it all progresses.

"Hopefully it's changing down there," Stanton says. "The city of Miami is always going to be one of my homes, and I'll never forget my time there."