LOS ANGELES -- What if Andrew Friedman retired now, at 42? What if his organization was somehow left unattended, which meant no draft picks, no trades and no free-agent signings? How much longer would the Los Angeles Dodgers continue winning 90-plus games, a mark they reached every year from 2013 to 2018?

Friedman, in his fifth season as the team's president of baseball operations, was intrigued by the thought.

"I'd have to think about that," he said, leaning against a railing on the third-base side of Dodger Stadium's upper deck. "It's an interesting question; I just don't think about it that way."

The answer, according to the projection model used by ESPN's Bradford Doolittle, is three more years, through 2021. It means the Dodgers, as they sit, have a strong chance of capturing three more National League West titles in succession, an uncommon level of sustainability that has extended itself through Friedman's prudence -- a prudence that is often met with disdain in a star-driven city like L.A.

"I get it," Friedman said. "Fans will be like, 'We'll think about 2022 when we get to 2022.' I understand that. I've been a fan; I'm a fan of teams in other sports. I get the focus being on the right now. And it's probably the most challenging aspect of what we have to do, which is to balance the now with the future, and finding that right equilibrium between them."

The 2018 World Series unraveled because of a decision -- the latest in a countless string of them amid a season that lasted 179 games -- to remove Rich Hill in the seventh inning of Game 4. The 2017 World Series was decided during an exhilarating, bizarre Game 5 that saw Clayton Kershaw blow a four-run lead, dropping the Dodgers' record to 49-2 under such circumstances. 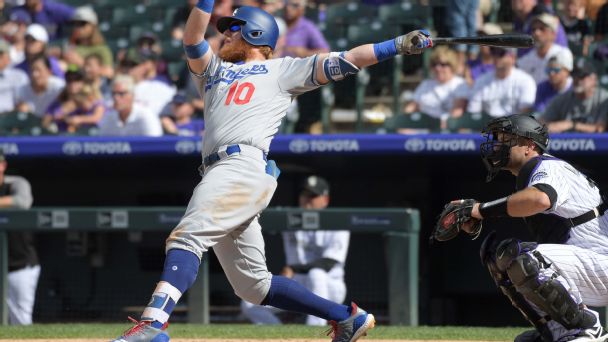 L.A. visits Colorado in a matchup of NL West teams that needed 163 games to decide the division last season
(Sunday at 8:30 p.m. ET on ESPN)

Perhaps the most redeemable quality of baseball's prolonged regular season is that it tells no lies; the sample size is large enough to reveal the true identity of each organization. After 162 games, there can be no argument. The maddening part about the playoffs is that they often reward the hottest teams and sometimes even the luckiest ones; the sample size is small enough for unforeseen events to outweigh talent disparities.

Friedman is perpetually conscious of this reality, a sentiment that sits at the core of his roster-building philosophy. His main objective is to continually build 90-win seasons in order to maximize his team's chances of capitalizing on the randomness that dominates October. Going all in on one season, by chasing the costliest free agents and trading the brightest prospects, is, in his mind, a risk without enough upside. The postseason is too much of a crapshoot.

Friedman will forcefully push back on the narrative that his Dodgers have not done enough to win each season, pointing to the long list of prospects who have been traded since his hiring. Eight of those young players were used to acquire Yu Darvish and Manny Machado in consecutive Julys for playoff runs that fell a combined four wins shy of delivering back-to-back championships.

In the wake of that, the Dodgers didn't re-sign Machado and didn't aggressively pursue Bryce Harper. Instead, they made subtle moves -- signing A.J. Pollock, trading for Russell Martin, adding Joe Kelly -- to augment a roster that is once again projected to win 90-plus games in 2019.

Before opening day, PECOTA, the projection system developed by Baseball Prospectus, had the Dodgers winning 94 games this season, 15 more than any other team in their division. If that holds true, the Dodgers would capture their seventh consecutive 90-win season, a streak reached only three other times throughout history. Over the past three years, only the Chicago Cubs have won more regular-season games.

Just as impressive, if not more so, is what lies ahead.

Corey Seager, Cody Bellinger and Walker Buehler will each be under club control for at least three more seasons. Will Smith and Keibert Ruiz, on the cusp of the major leagues, are two of the most promising catching prospects in the industry. Julio Urias, Tony Gonsolin and Dustin May should help solidify the rotation for years to come. And corner outfielder Alex Verdugo and middle infielder Gavin Lux project, at minimum, as solid contributors.

"We feel really good about the core of talent we have at the major league level, and then the runway of talent behind it," said Friedman, who watched the Dodgers finish their first homestand with a division-leading 5-2 record and a major league-leading .945 OPS. "When you couple that with the financial flexibility that we have going forward, we think it's a really good combination."

It should be noted that Friedman is doing a lot of his winning with players he inherited from former general manager Ned Colletti, a list that includes Seager, Bellinger, Verdugo, Urias, Kershaw, Justin Turner, Joc Pederson, Hyun-Jin Ryu and Ross Stripling.

Friedman replaced Colletti in the fall of 2014, taking over a roster that failed to advance past the Division Series despite spending at least $30 million more than any other team. Since then, the Dodgers have made their mark mostly with shrewd value additions (Chris Taylor, Max Muncy, Enrique Hernandez) and encouraging draft picks (Buehler, Gonsolin, May, Smith, Ruiz).

In his prior job, Friedman made decisions for a Tampa Bay Rays organization that lacked the financial might to sustain mistakes.

He recalled his mindset back then, and how it still applies.

"There were a lot of instances where I was rooting for the Yankees and Red Sox to sign a player to a long-term contract for a lot of money and tying up their flexibility and putting themselves in a position where they could fall off a cliff and have to rebuild some," Friedman said. "And we've seen it with large-revenue teams over the last five, seven, 10 years that have had a good run of success, and then have kind of fallen off the cliff and had to rebuild.

"We're trying to thread the needle of being as strong as we can be in 2019 while not turning a blind eye to future years. Which, as much as our fans want to win now, and so do we, when we get to the year 2022, our fans will be happier with the decisions that we've made."