Last spring training, after the Astros had won the World Series, then-Houston starter Dallas Keuchel was asked about the possibility of a World Series hangover. Keuchel's response: "We're not the Cubs."

He was referring to the previous year's World Series champions, who stumbled their way through a mediocre first half in 2017. "It was just a different intensity," Cubs first baseman Anthony Rizzo would later say in explaining the club's slow start that year. "It's hard to match the intensity of a Game 7 World Series or being down 2-1 to the Dodgers and coming back and beating [Clayton] Kershaw."

With the Red Sox off to a horrific 6-13 start with a minus-42 run differential that is worst in the American League, the World Series hangover theory is in full effect. Let's take a look to see how real it is, checking how each of the World Series winners since 2010 performed early in the following season.

True to Keuchel's words in March, the Astros were not the 2017 Cubs. They came out firing thanks to a 2.54 staff ERA through April, and while the Mariners and later the A's give them a chase for the AL West title, the Astros held first place at the end of each month of the season. They won 103 games and reached the American League Championship Series.

The Cubs actually weren't terrible in April, finishing the month with a plus-18 run differential and in first place in the NL Central. But they stumbled after that. They were 16-12 when the Yankees swept them at Wrigley, then they lost two of three at Colorado and St. Louis, and at the end of the month they went 0-6 on a road trip to Los Angeles and San Diego. They finished the first half 43-45, but won their first six games after the All-Star break and 15 of their first 18 on their way to a 92-70 season and division title.

Getting late early for Red Sox 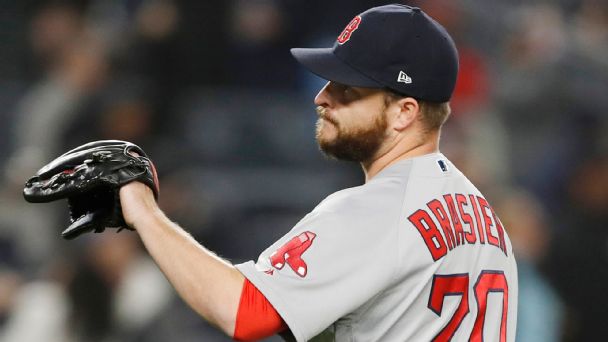 After a bullpen blowup at the Bronx, the Red Sox face a series at first-place Tampa Bay in dire need of a turnaround -- even if it's only April. Joon Lee

The Royals were in first place at the end of May, so it's hard to say they suffered from a hangover. They fell apart with a 7-19 mark in July, undone by terrible pitching (5.1 runs per game). They finished .500, reflective of the talent of the team and a few more injuries than during their two World Series years.

The Giants did get off to a bad start -- they were 9-13 at the end of April and were outscored by 28 runs -- but they turned things around with a strong May. They plodded along the rest of the way, however, at two games under .500 and finished 84-78. But the 2014 team had finished just 88-74, and this season saw both Tim Lincecum and Matt Cain suffer injuries and have poor results.

The Giants actually had a strong initial 20 games before falling apart in June and July, when they went 18-34. While the pitching was mostly bad all season (the rotation finished 24th in the majors with a 4.37 ERA), the offense collapsed in those two months, averaging just 3.2 runs per game. Hangover? Seems more like Matt Cain, Barry Zito and Ryan Vogelsong just weren't as good as they had been in 2012. The 2012 rotation also was extraordinarily healthy, with the top five guys starting 160 of 162 games.

Hangover? Not really (they had a good first 20 games).

This was the year Buster Posey suffered a season-ending leg injury -- but that didn't come until May 25, when the Giants were 27-21. So certainly part of the reason they fell from 92 to 86 wins was Posey's injury, which has nothing to do with a hangover. It's worth noting that the Giants' pitchers didn't seem to suffer from much of a hangover: They allowed just five fewer runs in 2010. The offense was the culprit, scoring 127 fewer runs thanks to Posey's injury and Aubrey Huff and Andres Torres regressing from big seasons.

It seems, based on this very unscientific examination, that the World Series Hangover Theory is mostly a bunch of nonsense. The Red Sox are unique because they were so good last year and their start is particularly awful -- nothing on our list compares to their start. In fact, over the past five seasons only seven teams had a worse run differential through their first 19 games than Boston's minus-42 mark.

Maybe the Red Sox are suffering from a lack of intensity, as Rizzo might describe it. Or maybe their pitching staff has been slow to get going because of all those October innings. Or maybe it's baseball being baseball and these things just happen.

The star of the game, however, was Julio Urias, who allowed one hit and fanned nine over six scoreless innings. Imagine if Urias is finally coming into his own alongside Walker Buehler ...

Joey Votto update: Longtime readers of this column will know my admiration for the Reds first baseman, one of my favorite players in the majors. As you may have heard, on Wednesday he popped out to first base for the first time in his career. He had a better highlight on Thursday, as he hit the first leadoff home run of his career:

Anyway, I wanted to go back to Votto's popup. How unusual is it that he had never done this? Very unusual. I went back and via the Baseball-Reference Play Index checked the records of some other left-handed hitters to see how often they popped up to first base:

Wade Boggs: 14 popups. Charlie Hough got him twice in the same game in 1984! One of those was a 1-5-2 double play with runners on first and third and no outs, with Marty Barrett somehow getting caught off third base.

Tony Gwynn: 15 popups. Like Boggs, a different kind of hitter than the others here, he had five in 1984 and then just three over the next 11 seasons.

Will Clark: 18 popups. Half of them were foul popups, when parks had more foul territory than they do now.

Barry Bonds: 71 popups. Including one when a runner got doubled off base. Would love to see the replay on that one. Four pitchers got him twice on popups to first base: Greg Maddux, Curt Schilling, Terry Mulholland and Jim Deshaies.

Jason Giambi: 35 popups. A lot of foul territory when he played for the A's.

So, yes, Votto's "no popup" thing is pretty remarkable. A study to do: I wonder if players in general pop out less to the infield than they used to? Or maybe guys like Votto and Freeman are unique in this ability.

Where there's a Will there's way (to four home runs): Congrats to Indians minor leaguer Will Benson for hitting four home runs in one game for Class A Lake County. He homered in his first four at-bats as he went 4-for-5 with eight RBIs:

The moment Will Benson made history.

The last minor leaguer with four home runs in a game was Mike Ford in 2014, and Benson is the 10th player to do it since 2006. (It has happened three times in the majors since 2006 and just 16 times in history.) Ford, incidentally, made his major league debut for the Yankees on Thursday and went 0-for-3 with a walk in a 6-1 loss to the Royals (good start by Homer Bailey!).

Play of the day: Alex Verdugo had a big assist at home plate for the Dodgers to cut down a run in the bottom of the eighth, but how about Nolan Arenado doing his thing:

Here's a contest: Predict the first year Arenado will NOT win a Gold Glove.