Dodger Stadium played "Last Time That I Checc'd," the hit song by Nipsey Hussle, and Alex Verdugo, who used the track as his walk-up music last season, got excited. He lifted himself onto the top bench of the home dugout and started to sway.

Then there was that time when Clayton Kershaw performed what looked like a sort of Irish dance to "Old Town Road" and Verdugo joined him. And the time when Verdugo got so frustrated at Russell Martin for not nailing their elaborate handshake that he mockingly yelled for a new partner.

He's a 23-year-old rookie, a bench player until only recently, but Verdugo has been a ray of light on this year's Los Angeles Dodgers, who could use some untapped energy sources for the long climb to another World Series.

Verdugo can electrify L.A. the way Yasiel Puig did, but unlike Puig, whose enigmatic personality created barriers, Verdugo also can unify a group. He wears that thick gold chain and that blue bandana and that exuberant smile, and his teammates have grown to love him for it. He cheers boisterously from the dugout, claps emphatically from the bases, and has achieved distinct likability in the midst of unrelenting arrogance, which isn't easy. Not at his age. 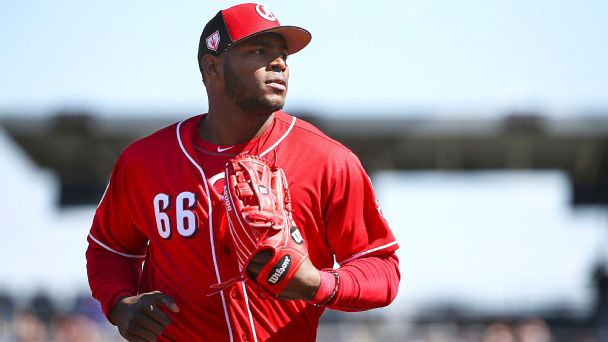 Sometimes dynamic, sometimes frustrating, Yasiel Puig's stay with the Dodgers was always interesting. Here's a look back at the most memorable moments. Alden Gonzalez

"He's very endearing," Dodgers manager Dave Roberts said, cracking a smile. "The more you're around him, the more you understand him."

Verdugo had proved himself as a major-league-caliber player by the end of the 2017 season, after sporting an .825 OPS through 495 plate appearances at the highest minor league level. But the Dodgers' abundance of outfield depth kept him mired in Triple-A through the following season. Over time, Roberts noticed that Verdugo got "a little bit bored." The game had become too easy.

"They put me in all kind of situations down there and I felt like I answered the bell and showed them what I could do," Verdugo said. "I wanted that next step. 'Hey, let me do it up here. Whether you guys don't think I can, or you guys think I'll fail or not, let me show you.' I'm not scared of failure. I'm not. I thrive off that. I thrive to be in the moment."

The Dodgers still didn't know what to do with Verdugo when 2019 began. They brought up his name in trade talks over the offseason, couldn't find a scenario that made it worthwhile, then put him on the Opening Day roster so as to not waste an asset.

Verdugo didn't have a discernible role when the season began, but he batted .333/.353/.636 as a part-time player. He became the primary center fielder after A.J. Pollock injured his elbow on April 28, and has hit .302/.375/.397 ever since. On the whole, his 1.5 FanGraphs wins above replacement -- boosted by a strong throwing arm and deceiving speed -- trail only Cody Bellinger and Hyun-Jin Ryu for the lead on a Dodgers team that boasts the National League's best record.

Verdugo felt lost when he first joined the Dodgers as a September call-up in 2017 and often found himself straying from his mechanics during two short stints in 2018. He vowed to stay short with his swing in 2019, a trait intended to counter long stretches of inactivity. He also pledged to be himself. The Dodgers expressed concern about Verdugo's maturity level in prior seasons, and Verdugo was made aware. His true personality didn't come through.

"I kind of tried to act a certain way that I thought they would like," Verdugo said. "Now, this year, it's 'be myself.' I feel like everybody has opened to it and I think they can kind of see that it's genuine."

In the midst of boyish exuberance, Verdugo is in many ways a throwback player. He is a left-handed hitter in an organization that has relied heavily on platoons, but he has recorded a hit in one-third of his at-bats against left-handed pitchers. He plays in an era dominated by launch angle and strikeouts but has never tried to lift pitches and has always prioritized putting the ball in play.

"I hate strikeouts," Verdugo said. "I'd rather do a swinging bunt."

Verdugo wears at least three necklaces for almost every game, most notably a thick rose gold chain that is encrusted with diamonds and displays his uniform number (27). Teammates call it a "Mr. T starter set," to which Verdugo usually says, "These are way icier than what Mr. T ever had."

"I like the jewelry," he said. "I like the way it shines, I like the way it looks. It's something that just gives me a little more confidence. It kind of gives you that edge too. People look at you like, 'Who's this guy with all this stuff? He's got more chains on than service time.' I just laugh about it, man. I'm all for it."

Kershaw credited the Dodgers' clubhouse with creating an environment where rookies are respected and not hazed. He says he believes it helps them get comfortable enough to thrive at this level, pointing to the recent success of Bellinger, Corey Seager and Walker Buehler in their rookie seasons. He also credited the young players themselves for having the personality to take a joke and give one back.

In that realm, Verdugo is at the forefront.

"I use the phrase 'youthful enthusiasm' a lot," Roberts said. "That's a compliment. There's things that come with it. And he's different than most of our players -- than all of our players -- but that's a good thing."