What we know about professional baseball's first no-hitter could fill a paragraph: It was thrown in 1875 by Philadelphia's Joe Borden, who was pitching under a pseudonym so his family wouldn't find out. It was performed before a small crowd under "threatening" weather. Borden (aka Joe Nedrob, aka Joe Josephs) defeated Chicago 4-0. The game took 100 minutes.

What we know about baseball's latest no-hitter, by contrast, could fill several laptops. We know practically everything, from the spin rate on Mike Fiers' first pitch (2,139 revolutions per minute, coming 88 mph out of his hand) to the size of the coffee mugs at Café Jolie, where the Oakland Athletics right-hander took his no-hitter-saving center fielder, Ramon Laureano, for breakfast the next day.

Since Fiers threw his no-hitter earlier this month, I've been thinking a lot about a deep fly ball Laureano caught to preserve the no-hitter. Statcast, the tracking system MLB uses to collect information on pitches, batted balls and fielder locations, estimates the ball Joey Votto hit just over the wall in Oakland was 62 percent likely to be a hit, based on the ball's trajectory and exit velocity (but not, it should be noted, the location of the wall or the direction of the ball). Jurickson Profar made a diving catch on a shallow popup to right field; that was 11 percent likely to be a hit, Statcast says. Jesse Winker grounded sharply into a double play: 25 percent of grounders hit that hard are typically hits. A Nick Senzel chopper wide of third base: 4 percent.

Fiers allowed more batted balls than just those. Add up all the probabilities of all his batted balls and one might have expected, in the absence of any other information, three or four hits to have landed on his pitching line.

Does knowing all of this change your relationship to Fiers' no-hitter? Should it? Will it in the future, when all the "should have" stats are more commonly cited? All of this is so new it's hard to say.

So, we're going to invent something right here: the Statcast No-Hitter. We'll test drive it today, see how it feels, see if we like it, see if it's fun. Maybe we'll hate it and discard it immediately, or maybe we'll have a new thing.

We'll take the Easy version first: Has anybody in the Statcast era (since 2015) thrown a complete game in which every single batted ball is less than 50 percent likely to fall in for a hit? Yes, though this turns out to be very difficult to pull off, even harder than a no-hitter. Since Statcast was fully installed in major league parks, there have been only five complete games that qualified:

Of those five, two were also real no-hitters: Heston's and Scherzer's. Kershaw struck out 14 but allowed three hits, the first one coming in the seventh inning (on a soft ground ball up the middle) and the other two coming on a bloop to center and a flare to right. None of those three hits crossed 90 mph off the bat, and no batted ball Kershaw allowed topped 100 mph. That's an incredible outing. (When Patrick Corbin threw a complete game on Saturday, he allowed four balls over 100 mph, and two over 110.)

Feldman allowed four hits, the first coming on a grounder up the middle in the fourth inning. Santana lost his actual no-hitter on the second batter of the game, when Eduardo Nunez hit a routine ground ball to Miguel Sano at third. Sano took a little too long to load up his throw, and Nunez was running hard, and Sano just let Nunez beat him. There was no misplay, exactly, so it was ruled a hit.

The legend of Laureano's laser 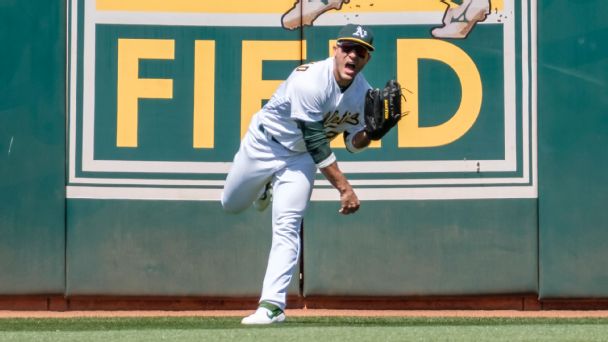 All five of these were great starts -- each pitcher threw a complete-game shutout -- but, of course, they were received very differently. Heston probably has a display somewhere in his house with a game ball from that start. His start, his no-hitter, is the reason his name will still be occasionally spoken aloud 100 years from now. Scherzer's might be mentioned on his Hall of Fame plaque. Kershaw's will be faintly remembered by Dodgers fans as one of the many great starts in his great career. Feldman and Santana's starts were performed with no suspense and treated no differently than any other pitcher shutout from 2017. Should they be? Hard to say.

On the one hand, they each allowed four hits. On the other, none of those hits was likely to be a hit, so Feldman and Santana got jobbed. But back to the first hand, each pitcher allowed as many hits, in total, as they would have been expected to yield, in total.

Neither pitcher, in other words, met our standard for a Hard Statcast No-Hitter. Santana allowed 25 balls to be put in play, and in sum they "should" have yielded almost four hits. They did. Feldman's expected hits were pretty much the same: 41 percent here, 31 percent there, and so on. The likelihood of any individual ball landing was low, but the likelihood of some ball landing was very high. He got what he merited? Something like that.

If we use the harder standard of a Statcast No-Hitter, then we're still waiting for history to happen. No pitcher in the Statcast era has allowed a cumulative hit probability less than 1.0 in a game (let alone less than 0.5 hits, which would avoid a debate about rounding). These are the actual no-hitters in that time, and how many expected hits each pitcher allowed in sum:

He lost his no-hitter in the seventh, on a broken-bat bloop by Carlos Gomez, just out of the reach of Anthony Rendon playing second base. "I got lucky, I got lucky," Gomez said after the game. Sort of. He hit the ball poorly, but he also hit it in a way and place that was 86 percent likely to be a hit, according to Statcast. So, Scherzer threw a great pitch and made a major leaguer break his bat, but the luck actually came a century and a half ago, when baseball players were deciding where on the field to stand. It can be very difficult, even with "should have" stats, to say what anybody deserved.

Gomez was somewhat disappointed. In his eyes, the most legitimate way to end a pitcher's bid at history is with a solidly struck ball. "He pitched a really good game today, and I can say I don't enjoy that base hit in the seventh," said Gomez, who wound up with the only hit against Scherzer. "It's what I think. You know, everybody's different. He's still throwing a really good game. I'm happy for him."

Beyond that flare, Scherzer got three infield popups, two routine fly outs, and six grounders: One was 100 mph (44 percent likely to be a hit), but the others were all extremely weak: 75, 69, 69, 59, 51. The "51" -- a weak roller right to the first baseman to end the game -- was the Brewers' third-best chance of a hit all day, at 12 percent. Gomez's flare not only cost Scherzer a no-hitter, but it cost him both the Easy and the Hard version of the Statcast No-Hitter.

If there's a takeaway from all of this, it's not that any of those no-hitters are overrated. Rather, it's that the collective nature of no-hitters is probably underappreciated. No pitcher throws a no-hitter by himself. We know that, but now we really know it: At least until we see a Hard Statcast No-Hitter, every single no-hitter is a collaboration between fielders making good plays, fielders making routine plays, fielders standing in the right spot, fielders being moved around the field by guys in the dugout, scouts and analytics staff giving information to the guys in the dugout, and so on. Laureano was widely credited with saving Fiers' no-hitter with his home run robbery, but Statcast tells us the greatest threat to the no-hitter was actually Yasiel Puig's deep fly ball to center, which was hit slightly harder, slightly farther and hung in the air for slightly less time. Laureano also caught that one, not with a highlight catch but because he had been positioned in the right spot and took the right route to the ball. It looked easier, but it contributed even more to Fiers beating the odds.

There's room in my brain to acknowledge that Scherzer's start on June 14, 2015, was truly something special. It was an outlier of pitching performance, and arguably -- these distinctions never really get past arguably -- the best performance by any starting pitcher in the past five years. Statcast has given us a new way of thinking about the pitcher's role in an outcome, and here it helps us more fully appreciate a bonkers Max Scherzer start that could have otherwise been buried in our consciousness behind some others. Gomez's hit took Scherzer's start "out of the history books," the TV broadcasters noted, but look, here, we can put them back in. I'm grateful for Statcast for this, and I believe I'll keep watching for Statcast No-Hitters. Especially the Hard version.

But it's actually illuminating, and not disparaging, to note that most no-hitters were not Statcast No-Hitters, and were thrown by pitchers who probably pitched slightly worse than Scherzer did on June 14, 2015. The point of a no-hitter is explicitly the pursuit of outcomes, and outcomes are collaborative. Fiers got lucky that Laureano made that catch. But Laureano didn't get lucky, except to the extent that he relied on Oakland's outfield coach, Ryan Christenson, to properly position him before the pitch. And Christenson didn't get lucky, except to the extent that Fiers kept Votto from hitting the ball one foot farther. Collectively, Fiers + Laureano + Christenson + the A's didn't get lucky at all. They earned that outcome. Collectively, a team earns every outcome.