LOS ANGELES -- Fifth Third Field, home to the Cincinnati Reds' Class A affiliate in Dayton, Ohio, is among the most electric venues in the minor league circuit, with more than 1,300 consecutive sellouts and counting. Now picture, if you will, that crowd, on a Saturday night in April, catching a glimpse of an opposing pitcher who's 6-foot-6, scrawny as can be, with a lush red afro puffing out of his cap and an accompanying red beard running down to his chin.

The unflattering comps poured in as soon as Dustin May began to warm up.

Connor McGuiness, pitching coach for the Los Angeles Dodgers' Class A affiliate in Great Lakes, Michigan, at the time, quickly became concerned about the mental state of his then-19-year-old starting pitcher.

Then he checked on him.

"It just didn't faze him," McGuiness said of May. "I think it rattled me more than it did him." 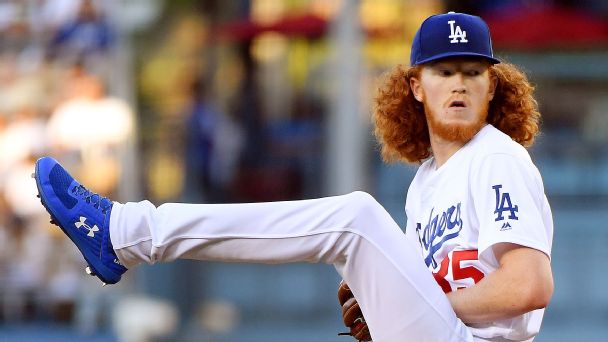 Dustin May went 5 2/3 innings, giving up 9 hits, 0 walks, 3 strikeouts in his Major League debut. Replay Dodgers vs. Padres on ESPN+

It was in that moment -- on April 29, 2017 -- when McGuiness realized he was dealing with the rarest of prospects, the type who can match dominant stuff with unflappable poise. May earned the nickname 'Gingergaard' because his stuff and his hair seemed to resemble some red-headed version of Noah Syndergaard. But he was hit with far more unflattering nicknames in so many of the visiting stadiums he pitched in.

"And he embraced it," McGuiness said. "He never flinched."

It made McGuiness believe that someday, whenever that might be, the stakes and the pressure of the major leagues wouldn't unhinge May. That day arrived, sooner than expected, on Friday. And though May wasn't particularly dominant -- he was charged with three earned runs on nine hits in 5 ⅔ innings of a 5-2 loss to the San Diego Padres -- his presence earned him at least one more start with the 2019 Dodgers.

"We'll go from there," Dodgers manager Dave Roberts said. "But it was fun to see him really keep his composure throughout that start."

May, now 21 years old, was throwing in the low 90s when the Dodgers made him a third-round pick in 2016, but the velocity was expected to increase with added weight and muscle. His arm stroke wasn't fluid, but the Dodgers vowed not to change it because the timing of his delivery was sound.

McGuiness' first season as a professional pitching coach came with May on the Great Lakes Loons in 2017. He then followed May to the Rancho Cucamonga Quakes, the Dodgers' advanced Class A affiliate, for the start of the 2018 season. McGuiness has since seen May ditch the four-seam fastball for a two-seamer that resembles a heavy sinker and can consistently reach the upper 90s, a pitch one longtime scout compared to that of Kevin Brown. He has morphed two breaking balls into what is best described as a power curve, while adding a low-90s cutter and, more recently, an effective changeup.

The changeup was the one pitch that gave May fits, but it also helped reveal two traits that Dodgers officials admired most about him.

One was his conviction.

It became evident to McGuiness on a random afternoon in 2017, when he asked May to try a certain grip on the changeup during a bullpen session. The pitch wowed everybody who saw it; information from the Rapsodo tracking devices supported their enthusiasm. But May wasn't pleased. It didn't feel right coming out of his hand, and so he wouldn't throw it.

"The best thing about Dustin, which I respect more than any of the guys I've coached, is he was never afraid to say no," McGuiness said.

The Dodgers continually challenged May to learn the changeup, even sending him to a pitching camp for refining specific pitches. May left with a couple of comfortable changeup grips, chose one heading into the 2019 season and incorporated it into his arsenal thereafter. Most young pitchers have to be reminded to throw pitches they're working on during games, but May went to the changeup often, even when he knew he could blow hitters away with his power stuff.

It showed his long-term vision.

"His goal was to become the best major league pitcher he could be, and not just win that one pitch," Dodgers president of baseball operations Andrew Friedman said. "He knew, from a developmental standpoint, how important that was. And that is very rare for a young, talented pitcher."

The pitch helped May -- the sport's 13th-best prospect at midseason, according to ESPN's Keith Law -- put together a thoroughly impressive stat line for Triple-A Oklahoma City last month. While pitching in the hitter-friendly Pacific Coast League, where balls fly and numbers inflate, May earned a 2.30 ERA through five starts. In 27 ⅓ innings, he didn't allow a single home run.

"I might've been the only one who wasn't surprised by it, to be honest with you," McGuiness said. "It was one of those things where he will elevate his game to a different level wherever you put him. He rises to the occasion."

May spent the early part of Wednesday wondering if he would be traded. Less than an hour after the 4 p.m. ET deadline came and went, he was informed that he would instead be making his major league debut with the Dodgers on Friday.

His flight the next morning was supposed to leave Salt Lake City, Utah, at 11 a.m., but a brake issue caused a three-hour delay. By the time May arrived at Dodger Stadium, most of his teammates were already on the field for batting practice. He slipped on a uniform, walked to the dugout, sat behind a camera lens, mentioned all of the people who would watch him pitch the following day and called this all "a dream come true."

"I didn't really have any plans for it," he said, "and then the summer before my senior year I was like, 'I'm just not gonna cut it.' And it just stuck. And I like it."

May cited that "conviction" as the biggest reason why he was able to jump all of the Dodgers' minor league levels in only three years. He called it "a huge confidence boost" that the front office seemingly refused to trade him away and vowed to "stay in the moment."

"Dexter," the popular Showtime series about the forensic technician who leads a double life as a serial killer, is his favorite show. May is watching it in its entirety for the fifth time.

"It just really enthuses me," he said. "First time I watched it, it kind of gave me a spark that if baseball wasn't my thing, then I wanted to be a detective."

"I don't know with my hair if I can be an undercover guy," May said. "Just a detective."

Teams have been constantly asking the Dodgers about May since 2017, when he was a 19-year-old embarking on his first full season in professional baseball. In the summer of 2018, May said, the speculation became "overwhelming." He was set to pitch on July 18, the day the Dodgers ultimately landed Manny Machado, and the rumors were swirling so viciously that May decided to turn off his phone. If a trade went down, they could reach him later.

Friedman failed to land the high-end reliever he sought largely because of his hesitancy to include a prospect like May and infielder Gavin Lux in a trade. On Wednesday, he expressed frustration. On Friday, he talked about watching the prospect he kept -- the one he can control for six more seasons -- ascend to the major leagues. Asked if it made him feel any better, Friedman shrugged.

"It's just different," he said. "Obviously Dustin is just a great organizational success story, from the scouting efforts to the efforts on the player-development side, and now to arrive at this level as quickly as he did, I think there are a lot of people that deserve a ton of credit for it, which is what I take a lot of satisfaction in."

The only solidified members of their pitching staff are basically their top three starters (Clayton Kershaw, Walker Buehler and Hyun-Jin Ryu) and their closer (Kenley Jansen). There is no telling how long May or fellow prospect Tony Gonsolin will be in the majors, or what role Julio Urias and Kenta Maeda will fill, or how the returns of Rich Hill and Ross Stripling will impact it all. Everything is in a flux.

"It's about taking these next two months to evaluate, putting guys in the best position to showcase, and then, as we get into the middle of September, we'll start to refine it a little bit more," Friedman said. "Obviously it's a combination of stuff and ability to execute that we'll be weighing. I don't have any concerns about the stuff that our 12-man pitching staff will be running out there."

Will Smith had only caught May a handful of times before Friday, but he was quick to point out his fiery persona on the mound -- how he'll pump his fist after good defensive plays, or yell at himself for not executing a certain pitch, or even perform some sort of twirl when balls are hit hard against him.

May never intended disrespect toward opposing teams, but has tried in recent years to temper his actions nonetheless. On Friday, May was outwardly animated but seemed inwardly composed. He needed 29 pitches to complete the second inning, but worked around an error and allowed only an unearned run. He cruised through the third, fourth and fifth innings, but ran into trouble in the sixth, giving up three straight singles at one point, then allowing a two-out, two-run double off the center-field wall, prompting his exit.

"He's got a good arm, he's got the stuff for it," Bellinger said. "The results might not have been what he wanted, but he's definitely got a bright future."

May received a standing ovation from the announced crowd of 50,780 as he retreated to the dugout for the final time.

Later, he was asked what he learned about major league hitters.

"That they get out," May said. "They put their shoes on and put their pants on the same way I do. They make mistakes, I make mistakes. They hit my mistakes, and I get them out on theirs. It's a lot of fun."