UFC middleweight Marvin Vettori was as dominant as ever with a unanimous decision victory over Kevin Holland in Saturday's Fight Night main event in Las Vegas. The Italian middleweight had no problem taking Holland to the ground and maintaining control throughout the fight.

Mackenzie Dern also had a standout performance on Saturday, defeating Nina Nunes in the first round by yet another submission.

Ariel Helwani, Brett Okamoto and Marc Raimondi break down the key moments of the matinee.

Helwani: Vettori wins, but he's not in control of the matchmaking

The pressure is really on Robert Whittaker and Kelvin Gastelum -- that's my biggest takeaway from Saturday afternoon.

Now, let me be clear: Vettori did what he had to do to win. He adjusted very well after the first round, and he once again exposed Holland's lack of takedown defense and fought a great fight. That was a good, solid win. He has nothing to be ashamed of.

After the fight, as expected, Vettori said he wanted Israel Adesanya, the UFC middleweight champion, next in October. The Italian has won five in a row and wants to right the wrong of three years ago when he lost a split decision to Adesanya, which just so happens to be his last loss.

I get it. And I wouldn't necessarily be mad if he gets the title shot. However, how can you honestly justify giving that title shot to him when Derek Brunson did almost the exact same thing to Holland three weeks ago? Like, why wouldn't Brunson get the shot first?

So that is why the pressure is on Whittaker and Gastelum, who meet in next weekend's main event.

You see, we hailed the three middleweight main events in March and April as a mini-tournament to decide who would be next for Adesanya, because there was no clear-cut contender waiting in the wings. And it doesn't seem like Brunson or Vettori did enough to cement their spot.

Holland was an intriguing candidate because he never fought Adesanya, but he has now lost two straight in three weeks. Darren Till was a front-runner, it seemed, but he was forced to withdraw from Saturday's main event due to a broken collarbone. So that leaves us with Whittaker and Gastelum, who have both lost to Adesanya recently, too, but who would also be fine choices with big wins next weekend.

Whittaker lost his belt to Adesanya in 2019 but has looked amazing in his past two fights with wins over Till and Jared Cannonier. Gastelum has won only once but did produce one of the greatest fights ever in a loss to Adesanya in 2019.

A big win for either guy could very well cement their spot as Adesanya's next foe. If not, it could be Vettori. Heck, it could even be Brunson.

But, if you ask me, after the past two middleweight main events, the pressure is on next weekend's headliners to grab this No.1 spot.

Funny how that works.

Okamoto: Who's next for Vettori and Holland?

Who's next for Vettori: Darren Till

It's not Vettori's fault Till broke his collarbone and didn't make it to the fight. So, you hate to "penalize" him for it, but unfortunately I just don't see him getting a title shot off this win. He was impressive enough on Saturday, and he beat a guy in Holland who lost a lot of hype in his previous fight yet nevertheless was a super dangerous opponent. 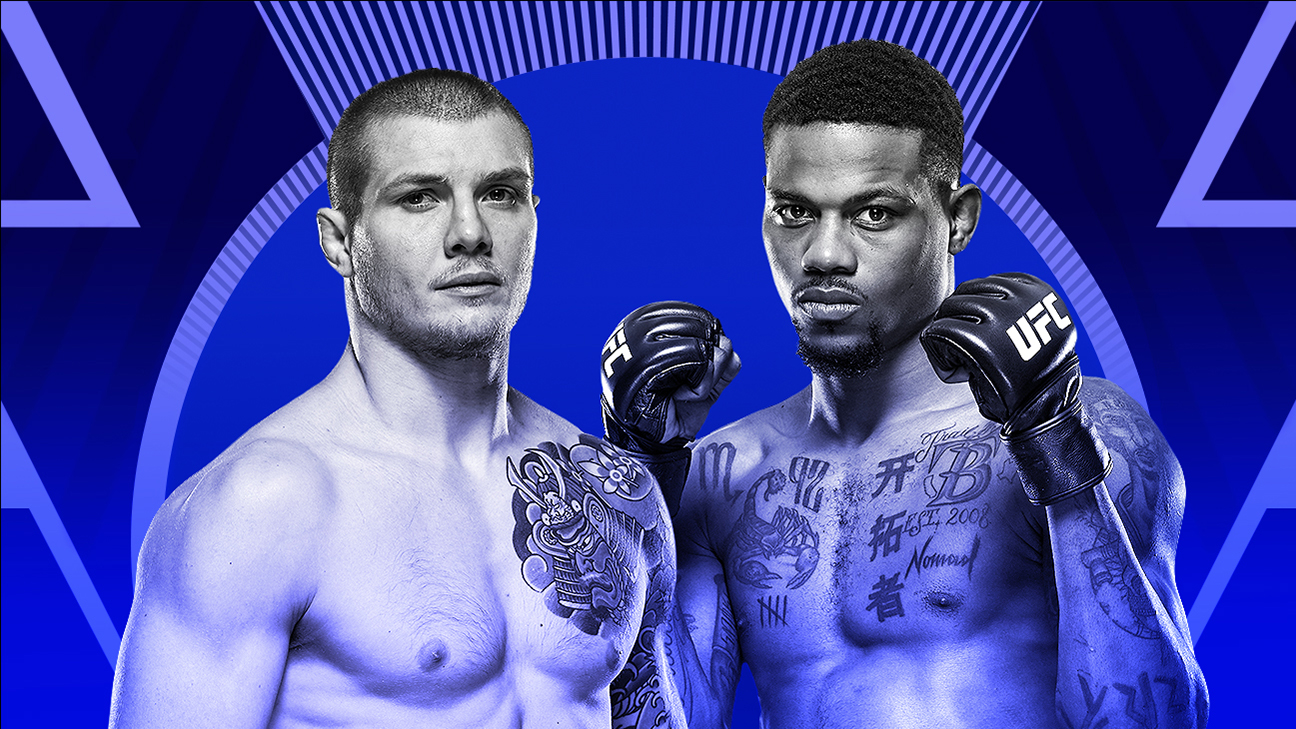 All fights from UFC Fight Night: Vettori vs. Holland will be available to watch on ESPN+.

Watch the complete card on ESPN+

But does this leapfrog him ahead of former champion Robert Whittaker in the rankings? No, it doesn't. So, if he doesn't fight for the belt next, the choice becomes: Wait or take a fight. And if he takes a fight against Till (depending on the timeframe for recovery there), that's a perfect fight. These two will have some good prefight exchanges on the mic, and the winner, especially if it's Vettori, would be very much in line for a title shot.

If Whittaker loses to Kelvin Gastelum next week, then I think the title shot goes to Vettori. Gastelum would obviously be in the running as well, but the body of work for Vettori would give him the edge. Plus, his last loss was to Adesanya in 2018. I'm all aboard the Adesanya vs. Whittaker 2 train (I think Whittaker clearly deserves it), but if he slips up next weekend, book Adesanya vs. Vettori 2.

Who's next for Holland: Miguel Baeza

At welterweight. Look, even though Holland is now coming off back-to-back losses, both of which he was badly out-wrestled in, I'm just as high on his potential as I was coming in. He hurt Derek Brunson in that loss. He hurt Vettori in Saturday's loss. The guy is very good.

He has a hole in his game. He needs to learn how to defend takedowns, clearly. He has admitted previously he doesn't like to wrestle. Well, fall in love with it Kevin. Embrace it. And even though I don't think he has to move to welterweight to be competitive, he has talked about it enough, and if he can make it safely and feel good at the weight, it won't hurt to fight less physical opponents.

Baeza would be a fun, stand-up matchup. But really, there are a million different options if Holland decides to drop.

If Holland sticks around at middleweight, I like this matchup. Quietly, Strickland had a bit of a breakout in 2020. He beat Jack Marshman and Brendan Allen, and is scheduled to fight in May. Win or lose, actually, I love this matchup. Strickland is a well-rounded fighter, and he would be a break from an opponent just looking to take Holland down.

Dern forces Nunes to tap with an armbar submission

Mackenzie Dern gets Nina Nunes in an armbar and forces her to tap out in Round 1 of their strawweight fight.

In her postfight interview Saturday, Mackenzie Dern said she's starting to feel like she is championship material. She's not wrong. Dern looked excellent again, taking down Nina Nunes and submitting her with an armbar in relatively short order. Brazilian jiu-jitsu was never a question for Dern. When she transitioned to MMA, she was the top pound-for-pound women's grappler on the planet.

But the start of her career in the cage was messy. Dern had weight issues coming down to 115 pounds. She had a falling out with the MMA Lab in Arizona and was essentially asked to leave the gym. Inside the cage, Dern seemed all too willing to just trade hands and brawl instead of showcasing her superior jiu-jitsu. It's clear Dern has grown a lot since becoming a mother in 2019. The weight issues are gone now; Dern is in incredible shape. And it seems like she has found a home in Costa Mesa, California, under striking coach Jason Parillo, who has coached the likes of legends Michael Bisping, Cris Cyborg and BJ Penn.

Dern still has holes in her game. It's unclear if her wrestling is good enough against the elite fighters in the division, which is a key because on the ground no one is better. Dern tied Gillian Robertson with the most submission wins in UFC women's history (four) on Saturday. But working with Parillo and having natural power in her hands should open up doors for her to get to her bread and butter. Or, at the very least, give her another way to wins. She has no career knockouts, yet has dropped several opponents with punches.

The biggest thing? Dern is still just 28 years old. She's in her prime now and much more mature than she was two years ago. And that's a scary proposition for the top contenders in the division.