Editor's note: Read the intro and 1-5 for free. Join Insider to view the rest of the rankings. 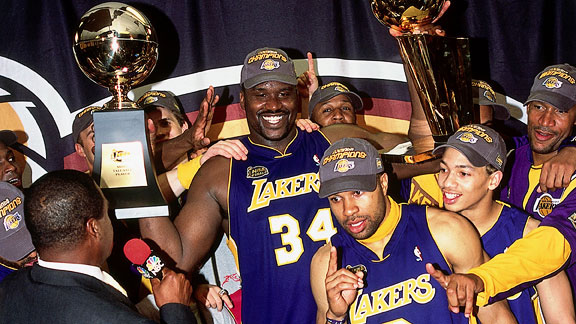 The high: Annihilated a top-seeded, 58-win San Antonio team in four games in the conference finals, winning the final two games by 39 points and 29 points, respectively, to complete an unbeaten run through three 50-win teams in the West playoff bracket.

The low: Lost Game 1 of the NBA Finals at home to Philadelphia, briefly putting their repeat quest in peril. It was their only postseason defeat, and it came in overtime.

The story: The defending champion Lakers didn't have a great regular season, winning only 56 games while the first bubbles of the Shaq-Kobe feud surfaced, but they got on the same page before the playoffs. Once point guard Derek Fisher returned from a foot injury, it was lights out; the Lakers completed what virtually everyone considers the best playoff run in league annals by narrowly missing out on an unbeaten postseason. Nine of the 15 wins were by double digits. The opposition was quality, too. The Lakers had an 11-0 zip through the West's three best teams of that era -- the Spurs, Kings and Blazers. Better yet, they finished the playoffs unbeaten on the road.

Their demolition of the Spurs, in particular, was impressive -- by my metric, it was the highest-scoring conference finals round since 1967. Better yet, the Lakers won their final eight games of the regular season as well. So, after starting off a ho-hum 48-26, they finished on a 23-1 blitz.

The only downer is that there are few great moments contained within; they were too busy demolishing everybody. A three-point win in Game 1 against Sacramento probably qualifies as their most "tense" moment, but any drama in that series ended after L.A. won Game 3 on the road by 22. The opener against the Kings was their only game decided by fewer than five points until the Finals. 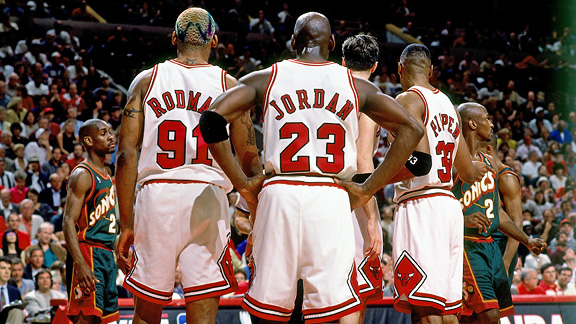 The low: The Bulls lost their focus someplace between Pike Place market and the Space Needle. After taking a 3-0 lead over Seattle in the NBA Finals, the Bulls needed just one more win to top the Sixers' 12-1 playoff run in 1983. Instead their offense went into a deep funk, scoring 86, 78 and 87 points in the final three games. Seattle's 21-point romp in Game 4 remains one of the more jarring NBA games I can remember; Chicago had one double-digit loss in its previous 97 games.

The story: Considered by many as the greatest team ever, the Bulls certainly looked the part for the first 15 games of their postseason run. Against a 60-win Orlando team in the conference finals, the Bulls won the opener by 38 and spanked the Magic again in Game 3. It was the second-highest-scoring conference finals in this study.

The Bulls also badly outclassed a 64-win Sonics team in the first three games of the Finals; most notably, they led Game 3 by 24 at the half, in a building where Seattle had gone 38-3 in the regular season.

Chicago also had a hiccup in Game 3 of the second round, falling in overtime to the Knicks before restoring order in the final two games.

Nonetheless, these playoffs were almost an afterthought; the team had already been crowned the best ever by most at this point because of a record-breaking 72-win regular season. The Bulls weren't at their best by the end, but they didn't need to be. 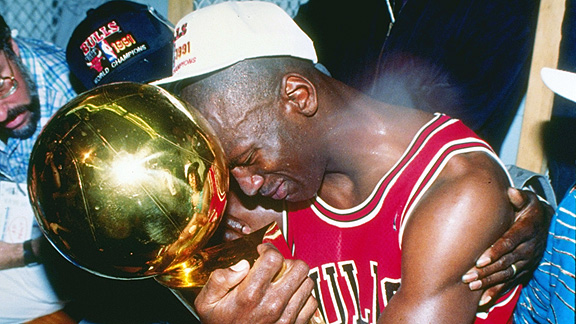 The high: Take your pick. Michael Jordan switching hands in mid-air on a high-flying layup, or John Paxson briefly taking over as Chicago's superstar at the end of the title-clinching Finals Game 5, scoring 10 points in the final four minutes to seal the win.

The low: Lost Game 1 of the Finals at home before rallying to four straight wins and the first title of the Jordan era.

The story: The Bulls' first championship run also had their most impressive win-loss record of the six, as they breezed through the draw with just two defeats. Of particular note was their four-game sweep of defending champion Detroit. But zoom the lens out and you see Chicago took out three of the most iconic players of the generation: In consecutive rounds the Bulls topped Charles Barkley, Isiah Thomas and Magic Johnson, and took out the last two champions in the final two rounds.

The Bulls slipped in Game 3 of the East semis against a 44-win Sixers team, but the rest of their résumé was impressive. Nine of their 15 wins were by double-digits, including a 41-point disembowelment of the Knicks in their playoff opener.

The most crucial moment came in Game 3 of the Finals in Los Angeles, with the series tied at one after the Bulls narrowly lost the opener. Chicago was down by 13 and still trailed by two in the final seconds when Jordan (who else?) tied it with a jumper. The Bulls held L.A. to four points in overtime to take control of the series, and then won the final two games on the road to clinch the title. 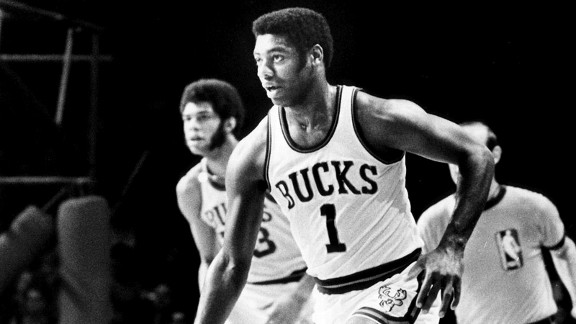 The high: Made up for their first loss of the postseason by shellacking the San Francisco Warriors by 50. Yes, 50.

The low: Lost Game 3 of the Western Conference finals to briefly add a sliver of doubt to their playoff run.

The story: This is one of the forgotten great teams in history, partly because the Bucks won only one championship and partly because they did it so easily. With Lew Alcindor dominating the paint and a still-effective Oscar Robertson on the perimeter, the Bucks were on another level in 1970-71, winning 66 regular-season games -- including win streaks of 20, 16 and 10 -- and then claiming the title without having to face another 50-win team.

Milwaukee took care of its business by posting the third-highest score for a second round, the fifth-highest for a conference finals, and the highest one for a Finals -- a four-game rout of Baltimore in which no game was closer than eight points. Thank heavens it went only four; it was played under a bizarre 1-1-1-1-1-1-1 format.

If you're looking for a memorable "moment" for this team, forget it. The Bucks were too busy blowing opponents off the floor. Their closest win was by eight points, in Game 3 of the Finals, and they led that game by double digits nearly the entire fourth quarter. All told, the Bucks played 14 games and won 11 of them by double figures; in the conference finals against the Lakers every one of their wins was by at least 18 points. 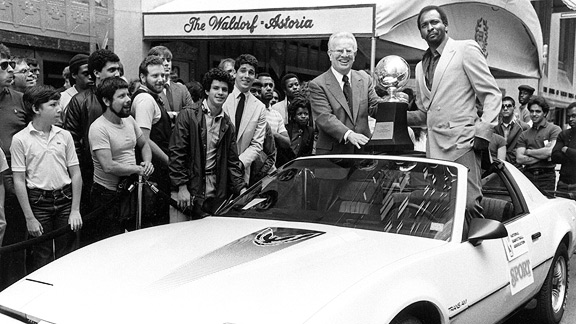 The high: Avenged a defeat to the Lakers in the previous year's Finals by sweeping the defending champs in four games, winning Dr. J and Moses Malone their only rings.

The low: Lost Game 4 of the Eastern Conference finals in Milwaukee to miss out on backing up Malone's "fo', fo', fo'" prediction.

The story: One of the game's underrated champions because they did it only once, the '83 Sixers were a 65-win juggernaut that kept up the pace in the playoffs. Philly didn't win as comfortably as one might have hoped, with only two wins by more than 10 points, but it steadily mowed down the schedule. The biggest hurdle was the conference finals opener against the Bucks, a team that history forgot because it didn't make the Finals but was one of the best teams of the '80s nonetheless. In fact, Milwaukee got to Round 3 by sweeping the Bird-McHale Celtics in a shocking upset.

Philly needed overtime to outlast Milwaukee in Game 1 and eventually dropped Game 4, but the Sixers wouldn't lose again that season. Their 12-1 mark stood as a record until the 2001 Lakers broke it, and while neither the margins nor the opposition stood out, their accomplishment remains largely unequaled.

The Sixers' demolition of the Lakers in the Finals, in particular, warrants respect: It's the second-highest scoring Finals series in the database.