To celebrate its 13th annual V Week for Cancer Research, ESPN is once again launching "Kicks to Beat Cancer," a series of charity auctions featuring game-worn and autographed sneakers from some of the sporting and entertainment world's biggest stars. 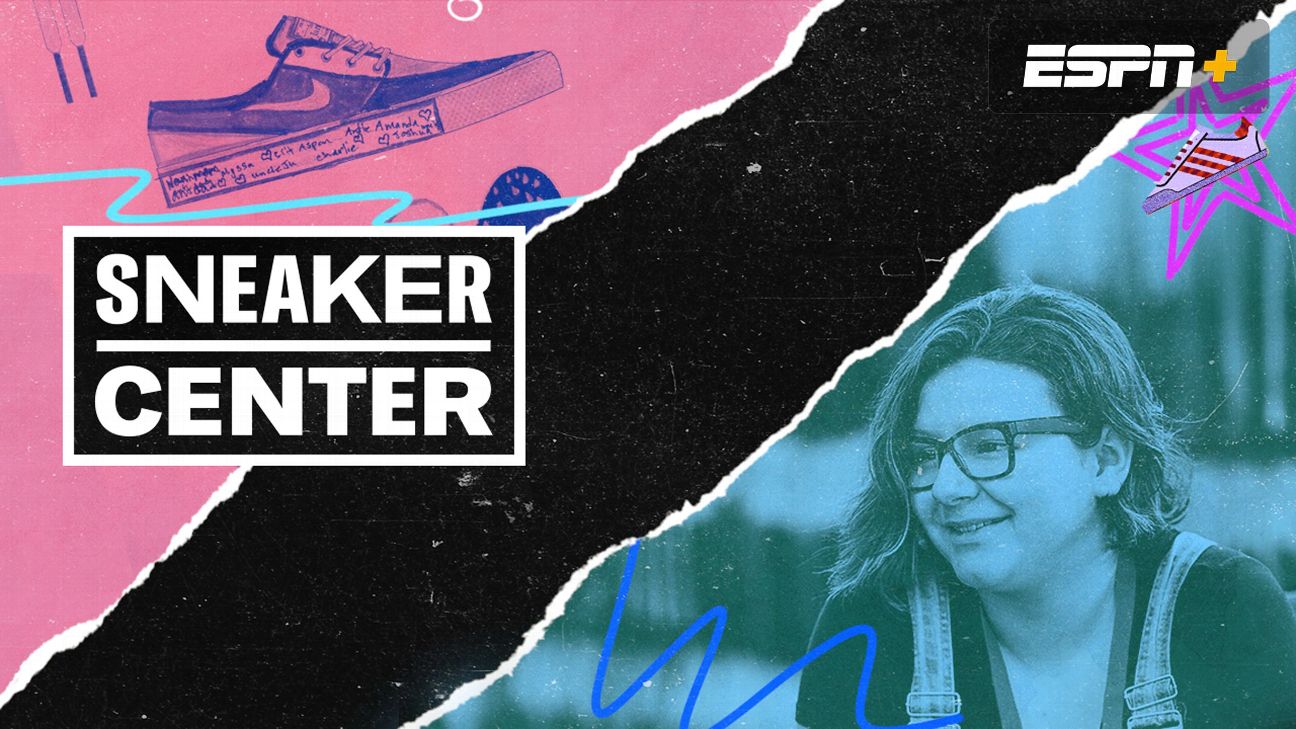 Wayne Drehs investigates how the Doernbecher Freestyle has raised nearly 20 million dollars for the Doernbecher children's hospital, contributing to new treatments and better care for kids. Watch on ESPN+

There are also featured cleats from the likes of 2019 Women's World Cup champion Carli Lloyd, championship skate shoes from superstar Nyjah Huston, and one of the most fashion-forward retro Air Jordan collaborations from longtime style icon Anna Wintour.

Last fall, Kicks to Beat Cancer helped raise more than $50,000 toward The V Foundation. To place your bids on the more than three dozen signed and game-worn sneakers from some of the biggest names in sports and entertainment, you can visit eBay.com/VWeek. Bidding for each auction will run through Dec. 12, with all proceeds benefiting The V Foundation.

The esteemed editor-in-chief of Vogue for more than three decades has long established a variety of fashion trends and spotlighted upcoming brands by defining the magazine's pages through her lens. In 2018, Jordan Brand launched one of its more unexpected yet well received collaborations in years, partnering with Wintour to create "the ultimate fashion sneaker."

Styled in red tweed fabric and premium black leather, each shoe features her "AWOK" penmanship, the mandated "Anna Wintour OK" sign-off needed atop each page of Vogue before the magazine could go to print. With this pair, her full signature can be found along the box lid.

The U.S. midfielder has long led the way in winning, with two Olympic gold medals, two World Cup championships and twice being named the FIFA Player of the Year.

Her player exclusive Nike Mercurial Superfly 6 Elite cleat features a custom "LLOYD" touch just under the Swoosh logo, alongside an American flag. Both cleats are signed on each toe, along with her jersey No. 10.

Released in Las Vegas during the summer of 2018, McCollum's first stateside release with Chinese brand Li-Ning bridged together his love of blackjack with white, black and gold tones. The heel features each card suit icon, while poker chips can be found along each tongue tab. His personal "CJM" logo takes up the right toe inside of an ace of spades graphic, while a trio of portraits of McCollum can be seen along the left shoe.

Now entering his 40th season as coach of the Duke Blue Devils, Krzyzewski has become an icon both on the Duke campus in Durham, North Carolina, and on the Nike campus in Beaverton, Oregon.

Nike's latest fitness center, a state-of-the-art facility that hosts everything from employee training sessions to NBA and NCAA team practices, is simply titled "Coach K" to honor the only Division I men's basketball coach to top 1,000 wins. His donated pair of Kevin Durant's KD11 signature model comes signed along each heel of the blue and white Duke exclusive colorway.

When Lillard first got word that he'd be receiving his own Adidas namesake sneaker, it was a moment he'd been hoping for, with endless ideas for the stories he could bring to life through his footwear.

"I remember just being in disbelief," he said. "Like, 'Man, this is really gonna be my shoe.' It's not going to be something that they just tie my name to, it's going to be an actual signature shoe."

His fifth signature model, the Dame 5, was on Lillard's feet when he drained a series-clinching game winner to advance past the first round of this spring's NBA playoffs. Lillard has donated a black-and-red colorway of the Dame 5, featuring "The People's Champ" along each heel tab and his simple initials and jersey number on each toe.

After signing with Under Armour in the fall of 2018, the All-Star center instantly became the face of its new HOVR Havoc line, headlining the high-top team shoe in bright and loud colorways since. Embiid has donated his Size 17 pair of the Havoc II in vivid orange, with a signature found along both toe caps.

Already one of the league's most dominant centers, Towns enjoyed being named to his very first All-Star team while helping to headline Nike's longtime Hyperdunk series.

Specially made for his Size 20 feet, Towns had donated a white and two-tone blue pair accented by his "32" logo in neon green along the tongue. His autograph can be found along the left toe, with an added "Go Wolves!" for good measure on the opposite toe.

As one of the biggest celebrities on the planet and no stranger to attention, Kardashian has seen up close the frenzy and demand for her husband Kanye West's ongoing Yeezy sneaker series with Adidas.

Kardashian has donated a pair of the recently released Yeezy 350 V2 in the "Butter" colorway, with her signature located along the outsole's Boost cushioning window.

One of the newest emerging stars to sign with Puma, the Los Angeles Lakers forward was drawn to the brand's ongoing connection to music, fashion and culture. After lacing up the brand's new Clyde Hardwood model to begin the season, Kuzma has recently been wearing a black, white and red edition designed by rapper J. Cole.

The limited-edition shoes feature Cole's Dreamville Records music label along the tongue, with Kuz's autograph found along the midsole of each shoe.

Since first launching his own signature training shoe with Under Armour in early 2018, actor and entertainment mainstay Dwayne "The Rock" Johnson has found an energy around his signature line in the fitness world that's morphed into an expanding community.

"Project Rock is not a brand, it's a movement," he said. "It's a core belief ... building the belief that regardless of whatever the odds, we can overcome and achieve -- but it all starts with the work we're willing to put in with our two hands."

One of the Under Armour athletes who has helped to champion that message is Vonn, one of the most decorated ski racers in her sport's history. Her white pair of the Project Rock II sneakers come autographed along each side.

At the helm of North Carolina's football program, Brown and his players have also benefited from the school's longtime association with Michael Jordan. As one of just a select few colleges to be sponsored by the former Tar Heels icon's Jordan Brand, the current UNC team receives a series of player exclusive cleats and uniforms each season.

Penned with "Go Heels!" Brown's autographed pair of the Jordan 1 TD Mid features Carolina blue paneling and obsidian accents throughout, with pairs only made for members of the UNC football program.

One of the most iconic sneakers of the 1980s was headlined by one of the NBA's biggest icons, as Johnson donned the Converse Weapon in Lakers colors throughout the 1986-87 season.

It would be the first of his three MVP seasons, with Converse re-releasing the classic sneaker often over the past three decades. Johnson has autographed each shoe along the supportive "Y-Bar" panel, along with his jersey No. 32.

After turning pro during his midteens in the late '80s, Hoffman would go on to become one of the most celebrated vert ramp riders in BMX history. Throughout his career riding to elevated heights, he also looked to elevate the BMX scene during a time of explosive growth for extreme sports, launching his own Hoffman Promotions arm to oversee vert ramp riding and bicycle stunts in official competitions like the X Games.

His well-worn pair of camouflage Vans come signed along each toe, with an encouraging "Go BIG" message for fellow riders. The pair was worn by Hoffman throughout his travels in France, England, Germany and Japan.

One of the most decorated skaters in the world at 24 years old, Nyjah Huston is already cementing a legacy for himself in the sport. A five-time Street League Skateboarding overall champion, Huston is donating his winning pair from his 2019 title, a white and blue colorway of his first signature shoe with Nike.

A native of Palmdale, California, George wanted to highlight his hometown with his third Nike signature sneaker. After launching with NASA-themed colorways to honor the nearby Armstrong Building, the model itself features one of George's favorite inspirational quotes along the heel: "Don't tell me the sky's the limit, when there are footprints on the moon."

This donated pair from PG comes with Palmdale packaging and an autographed official NBA basketball.

One of the most influential artists in music, Quavo is most known as a member of the Trio Migos. No stranger to the hardwood, he has also often taken part in the NBA's annual All-Star Celebrity Game, lacing up limited-edition LeBron sneakers whenever he hits the court.

Quavo has donated an autographed pair of the limited-edition white and royal blue "More Than An Athlete" Nike Air Force 1, a collaboration with James that pushes all to be "more than" their expectations.

While the North Carolina team may be provided an endless supply of exclusive basketball sneakers, Williams and the rest of his staff can often be seen wearing a variety of Jordan Brand's training models instead.

The Hall of Fame coach and three-time national champion's pair of the Jordan Trainer 3 features "Tar Heels" wordmarks across each strap, along with his signature at each collar of the white and Carolina blue sneakers. The Jumpman silhouette and UNC logo can be found on opposite heels.

In classic New York Giants hues, Cruz's pair of the Nike Air Cortez represents one of the brand's early running icons. The former Pro Bowl wide receiver and Super Bowl champion who currently serves as an ESPN analyst has signed each sneaker with a large full autograph and his jersey No. 80.