The Houston Texans quarterback spent half of his rookie season in 2017 in the team training room, recovering from a torn ACL. Working beside him, in his own rehab from a broken leg, was Watt.

Watson saw firsthand how hard Watt worked. So two years later, he wasn't surprised Watt accelerated the timeline for a return from a torn pectoral muscle. And when Watt's sack provided the spark needed in Houston's 22-19 comeback victory over the Buffalo Bills on Saturday, Watson saw it coming.

Monday through Friday, host Mina Kimes brings you an inside look at the most interesting stories at ESPN, as told by the top reporters and insiders on the planet. Listen

"We just knew it was a matter of time that he was going to make a play," Watson said. "It's J.J. Watt, Hall of Famer. [He's] the best guy to do it, and eventually, he was going to get his opportunity.

Watt's return, 69 days after tearing a pectoral muscle, was the latest example of his leadership role in the Texans' locker room. Watt knows he could have reinjured the muscle. But for at least one afternoon, when Houston completed a crazy comeback, the risk the three-time NFL Defensive Player of the Year took was rewarded. The Texans, after all, advanced to the AFC divisional round of the playoffs at the Kansas City Chiefs on Sunday (3:05 p.m. ET, CBS).

Three days after Watt had the surgery, he couldn't believe how good he felt. So he texted his doctor.

"I said, 'Doc, I feel weirdly good,'" Watt told ESPN's Lisa Salters. "Is there any possibility, like AFC Championship or Super Bowl, if we happen to make it that far, would I maybe be able to play?"

When his doctor didn't rule it out, it gave Watt the "sliver of hope" he needed to push the estimated recovery of three to four months to less than 10 weeks.

From that point, Watt's life revolved around rehab at NRG Stadium. With the exception of the bye week, when Watt flew to California to spend time with his brother Derek, a fullback for the Los Angeles Chargers, Watt was in Houston, quietly working.

"Whatever they would ... let me do, I would do, and I would do everything, and then I would listen to them," Watt said. "I'd stop when they told me to stop. But we would push. We'd test the boundaries, because every step of the way, I would ask the doctor, is there -- we would start trying some stuff that people don't try at that level or that many weeks, and he would say nobody's ever done this at this level.

Watt kept hitting checkpoints and passing tests. He methodically built his strength in the weight room. He talked to his teammate, Whitney Mercilus, who tore a pectoral muscle in 2017, and former teammate Christian Covington, who tore his biceps in 2017. And eventually, Watt and the medical staff targeted Christmas as possible date to return to practice.

"When the team would go on road trips, I'd be here working Saturday, Sunday, doing rehab," Watt said. "And then when the team was home, we'd do rehab before the game here and go out there and watch the game. But it was all hands on deck, for seven days a week, for eight weeks."

Watt had been through rigorous rehab before -- too many times, he'd probably tell you. In 2016, Watt needed two back surgeries, and the following season, he needed surgery after he broke his leg in Week 5. But this rehab was much easier, he said, because injuries to his back and his leg "really affect movement." Watt could run, work out his legs and do agility and position drills, which was "a huge help both mentally and physically for this recovery."

And the mental part was crucial for Watt, who said he has learned through all of his rehabs that you can't "let it get you down."

"Positive self talk can make such a difference in your life, and I think that's helped me a lot throughout these injuries, and this one especially," Watt said. "Just the belief that you can accomplish something really does make a difference, and you kind of manifest it into reality, and I think that's definitely helped in this case."

Watt said he kept the possibility he could return for the playoffs "pretty quiet," even around his teammates, because he didn't know if he could actually pull it off.

"You never want to over promise and under deliver, so I think this whole time I've never wanted to promise anything to anybody," Watt said the day he returned to practice, eight weeks after surgery. "I just wanted to promise that I was going to work hard every single day for the possibility of coming back, and that's all I've done."

A week after Watt announced he had returned to practice, he had a message for his teammates -- specifically the younger players.

"Some of these guys, it's their first year in the NFL and so you win the division, you go to the playoffs and you're kind of like, 'OK, this is just what you do,'" Watt said. "Well, no, you have to take advantage of every opportunity you have."

For all Watt's successes in his nine-year NFL career, it was only the second time he was on the field for a playoff victory. His first came after the 2012 season.

Watt's message to the team -- something he called simply "breaking down the huddle" at the end of practice -- gave left tackle Laremy Tunsil chills. "It's great to have a leader like J.J. Watt back," Tunsil said.

Going into Saturday, the plan was for Watt to play on third downs in passing situations, with he and the coaches "trying to pick our spots throughout the rest of the game, try and find pass-rushing situations and things like that."

He was on the field for 44% of the defensive snaps in the first half, but after the Texans started their comeback, he played 76% of snaps in the second half and overtime.

"Throughout the first three quarters, we followed it pretty tightly, and it was frustrating at times," Watt said. "I mean, I'm not going to lie. You're itching to get back out there. You want to be out there for every play, but you also have to be smart. I wasn't going to be dumb about this. That was one thing I promised myself, I promised my family and everybody else.

"But we also said that our plan was, once it came down to crunch time, everything, all the rules were out the window, and we just wanted to win. Whatever it takes to win, because that's the whole reason for coming back. ... So fourth quarter and overtime, it was cut it loose, hope for the best, and that worked."

And Watt was as effective as ever. His pass rush win rate against the Bills was 26%, which was better than his percentage during the regular season (24%), which was good enough to rank seventh overall in the NFL, according to ESPN pass-rush metrics powered by NFL Next Gen Stats. Watt was double-teamed on 50% of his rushes, also higher than his regular-season rate of 40%.

"He made some really game-changing plays," Texans coach Bill O'Brien said. "He just changes the game by his presence in there. His talent, he draws a lot of attention relative to blocking schemes and things like that, but he's a great player. ... It was great having him back in there."

"So quite frankly, I don't really care what anybody else says. I did it for those moments right out there, and it was a hell of a feeling." 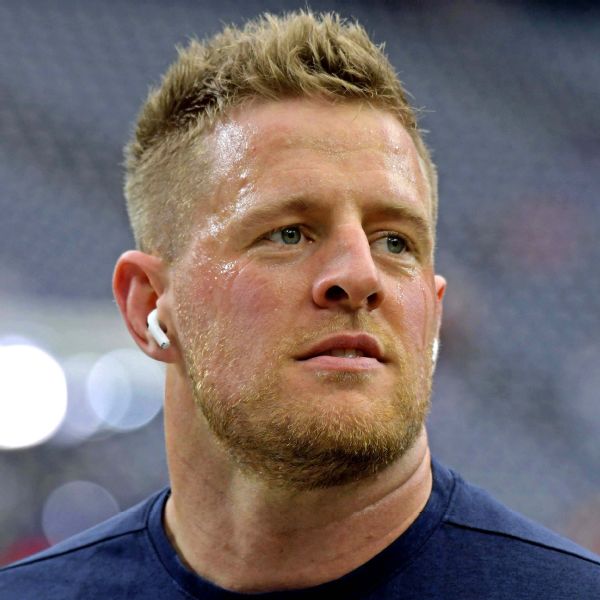 J.J.Watt, on criticism he was taking too big a risk

There was a moment Watt realized exactly what the risk entailed. On a play when Josh Allen was rolling out, Watt dove for the legs of the Bills' quarterback.

Watt thought, as he dove for Allen, that this was when his surgically repaired pectoral muscle would be tested.

"The doctor and I just hugged in there after the game," Watt said. "Neither of us had any clue how that happened because he saw the exact same play I saw, and we were both scared out of our minds. But it worked."

There might be more plays like it in Houston's playoff run. But by returning Saturday, Watt proved to himself he can handle it.

"There are a lot of people that were questioning it or calling me crazy or telling me that I shouldn't be doing what I'm doing, but nobody knows what those feelings feel [are] like, and nobody knows what it's like to be part of the group of guys like we have in that locker room. So quite frankly, I don't really care what anybody else says. I did it for those moments right out there, and it was a hell of a feeling."