When Vince Papale and his family get together with actor Mark Wahlberg, the "Invincible" connection they first shared 15 years ago is as strong as ever.

Papale is the diehard Philadelphia Eagles fan and bartender who improbably became a member of the team in 1976, elevating to special-teams captain two years later. Wahlberg is the Boston-born actor who helped bring Papale's story to life in the inspirational Disney-produced film released in 2006.

This week, with ESPN scheduled to air "Invincible" on Friday (8 p.m. ET), they met up again on the small screens of their own electronic devices -- reflective of life during the coronavirus pandemic.

"What was most special to me is the inspiration," Wahlberg said. "A guy who was willing to sacrifice just to help the team he loved and inspire and motivate a city at a time they really needed it. That made me continue to challenge myself every step of the way. 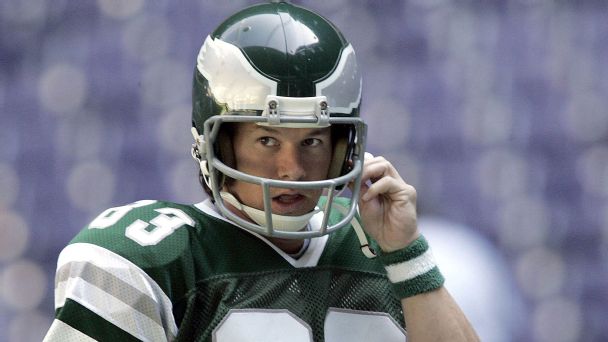 "I went from 'Four Brothers' to 'The Departed' to 'Invincible,' and then having to go back to continue 'The Departed.' This experience, and what Vince was able to accomplish, really inspired me to dig a little deeper, get a little tougher, and go and get after it. I still feel that way. I feel that way every day I wake up."

How Wahlberg and Papale remain close is one of many behind-the-scenes stories from "Invincible," an underdog story highlighting the power of hope, sports bringing communities together, and, in the words of Papale's wife, Janet, making "the impossible possible."

Wahlberg, 48, said that of all the movies he's been a part of, it's the true stories that have the biggest impact on him, such as "Invincible," "The Fighter," "Lone Survivor," and "Patriots Day."

"When I talk about the variations, and the level of responsibility from telling a story like that, it's different," he said.

That was reflected this week when Wahlberg happily joined the 74-year-old Papale, Janet, and their kids Gabby and Vinny on a Zoom videoconference with ESPN.

"To have a relationship and friendship with a guy like Mark, to me, is very special and very important," Papale said from Jupiter, Florida. "Right from the beginning, there was that respect obviously I had for Mark. When he first came in and met Janet and me, he was all dressed up in Boston Red Sox stuff. The first words out of his mouth were, 'I'm going to make you proud. I'm going to make the city proud.'"

Wahlberg, who proudly professes his allegiance to Boston sports teams and shares a friendship with Tom Brady among other athletes, said it wasn't a difficult transition to become an adopted Eagle.

"I love them, but I get it, it's also a business," Wahlberg said. "When TB12 wanted to go and people were like, 'You have to be mad, you have to tell Tom to stay,' I was like, 'I want Tom to go wherever he wants to go. Tom has given us many, many great moments. He deserves to do what's best for him and his family.'

"So having that connection -- look, they threw snowballs at Santa Claus, you know how hardcore Philly fans are -- to be named an honorary 'Philadelphian' and to have been welcomed there was an absolute honor. I've made a number of films in Philadelphia, have made and met many amazing people and created many great friendships and bonds that will last forever, especially with Vince and his family.

"Even when the Patriots played the Eagles in the Super Bowl [in the 2017 season], it was the first time that I could have a stress-free day. I'm such a diehard Patriots fan, I get sick, I get nauseous, my kids start cursing; it's out of control. That being said, would I have preferred for the Patriots to win that Super Bowl? Yes. But was I happy and knew what it meant to the city of Philadelphia, for them to win? I'm always Patriots first, but I still sing the song, E-A-G-L-E-S, Eagles! You know it. I took a lot of pride. I'd rather beat the Giants every time; if the Eagles win, congratulations to them."

Part of that for Wahlberg is knowing how much it means to Papale, whose love for the Eagles as a youngster grew through watching how much the team meant to his father.

The father-son relationship is a significant part of "Invincible," although that wasn't initially part of the plan.

"The original script did not have my dad written into it," recalled Papale, who was present on the set throughout the filming, which Wahlberg said added some pressure on him. "I talked to Ericson [Core], our director, and said, 'How could my dad not be in here? He was such an important part of everything. The guy was in the stands when I ran the 40-yard dash when I had the tryout. He was at all my rough-tough games. He was always there. We were best friends.'

"They [then] wrote my dad into the script. People ask me if I had anything to do with the script and that was really the only thing."

As it turned out, it was one of Wahlberg's favorite parts.

"The moments with your dad in the movie, those things resonated with me so much, because my dad was a teamster, a truck driver, he was in the military. The Red Sox were his everything. He hung his hat and hopes and joys on them. He could have nothing, and literally if the Red Sox had a chance to get over the hump and break the curse, that would have made his world," Wahlberg said.

"To know how many people were working in the factories [in Philadelphia] and striking, it meant something to a lot of people. It gave a lot of people hope. I remember when the Red Sox came back [in the 2004 American League Championship Series], down 3-0, I had never seen my dad so happy."

Another notable family tie-in from "Invincible" was a scene in which Papale was driving through a Philadelphia neighborhood, feeling a bit overmatched at the time, only to be inspired by a youngster wearing his No. 83 who raced in front of his car to pick up a stray football.

Papale's son, Vinny, played the role of the kid in the movie, alongside his sister, Gabby. In a reminder of how time has since passed, Vinny just signed a two-year contract with the Montreal Alouettes of the Canadian Football League on Monday.

"I was 8 and didn't really understand what was going on at the time," said Vinny, a receiver from the University of Delaware. "I didn't realize it would take that long to shoot such a short period of time. We did it a million different ways, so what I remember about it is that it was a long day."

Now, Wahlberg is like a proud uncle to Vinny.

"What's up, pro?" Wahlberg asked him, emphasizing the final word as a way to say congratulations.

Wahlberg said playing the role of Papale in "Invincible" taught him valuable things that carried into future projects, such as how NFL Films did filming of football scenes as if it was a real game. So when Wahlberg played the role of boxer Micky Ward in "The Fighter" a few years later, a film he also produced, scenes were shot similarly to how HBO would do so in a regular boxing match.

The experiences fulfilled a childhood dream for Wahlberg growing up in Boston.

"I played sandlot football, played tackle football on the concrete, but I had never put the pads on. Or a helmet. When I went to high school, they didn't have a gymnasium. I had only gone to the ninth grade, didn't graduate; got my diploma when I was 42 years old," he relayed.

"The only way I felt there was a way out in Boston, you were going to become a cop or a crook, and if you were lucky enough, to become an athlete. Nobody other than Micky Ward who had ever come from my neighborhood became successful as an athlete. So I continue to jump at these opportunities to fulfill my own childhood fantasies."

And create new friendships along the way.

"I want to congratulate you and Janet on an amazing job," Wahlberg told the Papales. "I met these [kids] when they were very small, and to see them grow and see the accomplishments they've had, and the humility that they carry and conduct themselves with, and the work ethic they both have, I hope I can inspire my children that they can turn out to be as wonderful as you two guys did. To see them together still as a family, still there for each other, I hope our family can accomplish that, too."

It's the story behind the story of "Invincible," which Wahlberg said he plans to watch on Friday night alongside his sons.

For Papale, it's humbling that his story continues to generate attention, with the movie giving him what he calls the greatest gift of all: unlimited time to follow Gabby and Vinny in their pursuits.

"When you go ahead and do stuff like that, you don't think it's anything special. People say, 'Why did you do it?' Because the opportunity was there. Why not? I felt I had the skills to do it," he said.

"The doubters, the naysayers, the dream-killers, that's the kind of thing that motivates me more to try to do something. For somebody today to come up to me today and say, 'You're an inspiration, you give us hope,' that's one of the greatest compliments I could be paid."

You can watch Disney's "Invincible" on ESPN at 8 p.m. ET or anytime on Disney+. See more of your favorite Disney sports movies on Disney+. Sign up for the Disney Bundle and get Disney+, Hulu and ESPN+. Sign up here.