Morning Skate: What was the most inspirational moment in hockey this year?

Greg Wyshynski, senior writer: Being at the Vegas Golden Knights' first regular-season NHL home game in franchise history was a surreal experience. It was a confluence of hockey joy and unfathomable sadness for the community, as fans gathered at T-Mobile Arena nine days after a gunman left 58 people dead and 546 injured in the deadliest mass shooting by an individual in U.S. history.

The team dialed back the kitsch for home opener -- no easy task for a Las Vegas-based team -- and instead put the focus on the tragedy. Scores of first responders were honored before the game. They were led out onto the ice by Golden Knights players and received ovations as loud as any NHLer. The Arizona Coyotes, the Knights' opponent, lined up behind them on the ice during the ceremony rather than remain on the bench, in a symbol of unity. 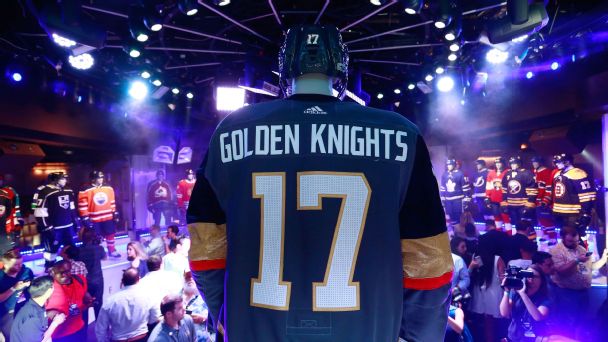 Greg Wyshynski and Emily Kaplan take you on a ride back through 2017 with their take on the top 10 things that happened this year in hockey. Listen »

There were 58 seconds of silence, to honor every person who died on what the locals now call "One October." Everywhere you looked, there were "VEGAS STRONG" messages: on the ice, on the boards, on fan signs and, frequently, on the back of fans' jerseys.

But the most inspirational moment of the night was when Knights defenseman Deryk Engelland surprised the crowd by stepping to the mic and addressing the fans. He did so not only as a Knights player, but as a longtime Las Vegas resident. "To the families and friends of the victims, know that we'll do everything we can to help you and the city heal," he said. "We are Vegas Strong."

As Engelland told ESPN ON ICE this month: "You talk to people across the city, and they're still affected by it. They're grateful for what we're doing, making them proud and coming to games to help them take their minds off it. It's the least we can do."

That inspiration extended to the opening-night game itself: Vegas won 5-2 -- and Engelland scored the game's second goal.

It was a night that was bigger than hockey for Las Vegas, and yet in the end it also created an indelible bond between fans and their new hockey team, one that endures months later.

Emily Kaplan, national NHL reporter: My final stick taps for 2017 go to the U.S. women's national hockey team. In a year that will be remembered as one in which women raised their voices against personal injustices, what these ladies did last March -- when, after more than a year of negotiations over wages and training conditions, the players announced they would boycott the International Ice Hockey Federation Women's World Championship if significant progress wasn't made toward an agreement -- should not be forgotten.

The disparities between how the players on the women's team were treated versus their male counterparts was startling. It wasn't just about money, though those figures speak for themselves: While players on the men's national team can play in the NHL, where the minimum salary exceeds a half a million dollars, the NWHL has slashed salaries; its salary cap is $270,000 per team. The women were simply asking USA Hockey for a livable wage, as it takes year-round training to remain elite. (And remember, these women are elite -- and way more accomplished in international tournaments than the U.S. men's national team, I should add). The grievances also covered basic tenets, such as how the women were treated when they booked flights and hotels; whether they were provided accommodations for guests as well as day care and nanny support. And so the women held out. And they held their ground, even when it looked like USA Hockey wouldn't budge.

In fact, the governing body looked for replacement players for the upcoming IIHF World Championships -- almost scabs, if you will. It invited high school players, women's league players, dozens of women in the USA Hockey pool -- and most of them publicly rejected the offer. This wasn't about one tournament, after all. It was about the future of women's hockey in this country, and really the world.

And though it's easy to be bogged down by the details, what resonates most is women fighting for what they're worth. Unions from the NHL, NFL, NBA and MLB and 16 U.S. senators voiced support for the women's players. A new, four-year contract was reached just days before the world championships. Compromises were made -- on both sides -- but these women's voices were heard. Under the new contract, USA Hockey will put more money into women's hockey with the national team receiving the same $50 per diem as the men along with similar travel and insurance perks. And, after winning that battle, they went on to claim gold against Canada -- in overtime, no less. Team USA captain Meghan Duggan called it a "historic moment in women's sports," and I couldn't agree more.

Chris Peters, NHL Insider: For me, the most inspiring moment of 2017 had to be Brian Boyle scoring his first goal of the season about two months after being diagnosed with chronic myeloid leukemia. The emotion Boyle showed, shedding tears as he celebrated the goal against the Edmonton Oilers, was simply unforgettable. It appeared that the weight of the previous few months had been lifted off by that goal, even if it was temporary. It was hard for the rest of us not to cry right along with Boyle.

Meanwhile, the big center who had only just signed with the New Jersey Devils this offseason, seems to just keep getting better this season as he continues to make an impact. In 25 games, Boyle has 10 goals and 16 points. There has been essentially no drop-off in his play. In fact, he is averaging the most ice time per game he has since the 2012-13 season, with 14 minutes per night, nearly a full minute-per-game better than his career average.

By simply showing up and trying to do his job to the best of his ability, Boyle is an inspiration every time he steps on the ice. That goal and the nine that have come after it have shown that it's going to take a heck of a lot more to keep Brian Boyle down.