Forty-nine players have appeared in a playoff game for the Washington Capitals or the Vegas Golden Knights en route to the Stanley Cup Final. Some of them have contributed mightily. Some of them have had their moments. One of them is from Australia.

Here's a ranking of every player who has seen action for the NHL's final two teams (and one who may make an appearance in the Final).

We weighed regular-season and postseason accomplishments in devising these rankings, both in terms of stats and other areas of impact on their teams.

After a 49-goal season, Ovechkin has been the most impactful forward in the playoffs, with 12 goals and 10 assists, having had a hand in game-winning moments in each round. "Beast Mode" would be an understatement.

He's the clubhouse leader for the Conn Smythe after flexing ridiculous stats throughout the playoffs, including a .947 save percentage and 1.68 goals-against average. This is a seasoned goaltender playing at the top of his game.

Forever the young Russian Robin to Ovechkin's Batman, Kuznetsov has followed his 83-point season with a playoffs-best 24 points.

He was a 30-goal scorer with the Florida Panthers last season and seemed to raise his game to a new level on the Knights' top line. Despite his goal total dipping to 27, he nearly doubled his assists from 21 to 48 in the regular season.

Mr. Everything for the Capitals' defense -- he's skating about 26 minutes per game -- has 16 points in 19 games. Didn't get the Norris Trophy nomination, but will get paid this summer.

Sure, you know him as the guy who leaped from six goals in 2016-17 to 43 goals this season. But Wild Bill's best attribute might be his defensive game. He'll likely finish in the top five in Selke Trophy voting.

After a rough regular season that cost him the first two starts of the playoffs, Holtby has a .935 even-strength save percentage in the playoffs. Against the Lightning, he did what Capitals fans have waited for him to do for years: win a series on his own, with back-to-back elimination-game shutouts.

Consistent, defensively sound and offensively gifted. He recovered from the hand injury he suffered in the second round, and he has 16 points in 15 playoff games.

For a team that doesn't have any defensemen who profile as a true No. 1, Schmidt leads the Golden Knights in ice time (24:53 per game in the playoffs) and has elevated his play to a shutdown level this postseason.

He's been the "Real Deal" since he broke into the league a decade ago with the Dallas Stars. Neal is as steady as they come; he has scored at least 21 goals in each of his 10 NHL seasons, despite playing a full 82 games just once.

Some side-eyed Oshie's eight-year contract with the Capitals last summer, but the winger plays a valuable role on their second line and in the slot on their potent power play.

Smith's chemistry with top linemates Karlsson and Marchessault is hard to replicate. Smith, a 26-year-old already on his fourth team, finally has found his groove. He has 14 helpers in 15 games this postseason.

He played in all 82 games for the Golden Knights, and he got active on offense: a healthy 10 goals and 31 assists, tops among Vegas defenseman. Exceeded expectations.

He had 31 points in the regular season but has leveled up in the playoffs on both ends of the ice.

The former Anaheim Duck came with high expectations, and he's right on track to fulfill them. He logged decent minutes -- his 20:21 per game in the regular season was second among Golden Knights skaters.

The Finn shows decent promise as a two-way center. The 27-year-old definitely has wheels, too. He probably projects as a bottom-six forward, but he has raised his game when playing around better players, like Neal.

He had 29 points in the regular season, skating 22:36 per game, but he gets a little downgrade here for a rougher ride in the playoffs.

An impending unrestricted free agent, Perron is a player the Golden Knights likely expected to deal away at the trade deadline. He has battled consistency issues on his four other teams, but he put up a career-high 50 assists and 66 points at the right time.

He had a career year offensively for the Capitals, and he provided some valuable work on the team's second line in the playoffs after Backstrom's injury.

The 27-year-old came along quite nicely for the Golden Knights this season. He doesn't put up offensive numbers, but he's been solid in Vegas' own end and can plug in on the top pairing.

Despite his reputation, and recent jaw-shattering suspension, Wilson functions well on the Capitals' top line, with 12 points in 16 playoff games. 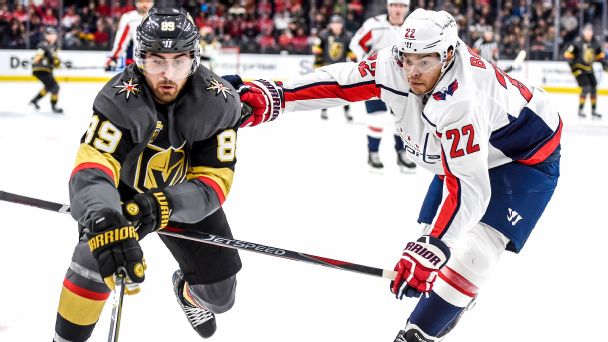 Greg Wyshynski and Emily Kaplan have returned home after a wild road to the Cup Final. They rehash Game 7 of Caps-Lightning and discuss how both Washington and the Golden Knights advanced this far. Plus, a full preview of the Final, followed by interviews with new Wild GM Paul Fenton and new Stars coach Jim Montgomery, as well as your favorite segments of the week! Listen »

He's a big man on the wing (6-foot-4, 222 pounds) who loves to throw his body around, but he also has scoring prowess. A 2014 first-round pick and star at Boston College, the 21-year-old has a ton of potential.

The journeyman over-delivered in a big way. A steady presence in the top four, Engelland also provided intangible leadership as the team's sole Vegas resident prior to this season.

The joke's on you: The maligned Orpik was a minus-9 in the regular season and is a plus-15 to (checks notes) lead all players this postseason.

He didn't have a great regular season (35 points) and was injured for much of the playoffs. But c'mon: two goals in a Game 7 for the Capitals. There's an argument for his being much higher on this list.

He had a career offensive year (15 goals) and has four more in the postseason.

Known predominantly for his defensive game, Eakin was left exposed by Dallas because of its center depth. Eakin raised his game on the penalty kill when Reilly Smith missed time in March.

The Capitals' backup goalie had a killer run to end the season, to the point where he was given starts in their first two playoff games. But it's Holtby's crease now.

The speedy forward had 13 goals in the regular season and one outstanding playoff game against the Penguins. He's a plus-5 at even strength.

Terrific on the penalty kill, he's been one of the team's most pleasant surprises (really, there were few expectations when the Czech was plucked from the Detroit Red Wings).

Does a lot of heavy lifting on the Capitals' fourth line. Brings a lightness to the team off the ice as one of its more personable players.

Low-key great pickup for the Capitals in a trade with the Blackhawks, he has played well with Carlson (minus a couple of miscues).

A physical force who has contributed four goals to this playoff run, including the game winner in the Capitals' clinching game against the Blue Jackets.

The Sharks protected Carpenter in the expansion draft, then pivoted and waived the 27-year-old in December. Vegas had scouted him last year and swooped in. He's a hard-working winger who can add a spark on the third or fourth line.

When Bellemare signed with the Flyers as a 29-year-old "rookie" in 2014-15, he essentially made the team for his talent on the penalty kill. He's still strong in that department, and he also leads all Vegas forwards with 63 blocked shots at even strength.

A 2012 first-round pick of the Boston Bruins, the younger brother of P.K. unceremoniously ended up on waivers this fall. The Golden Knights gladly swooped in; the rookie has been terrific (.910 save percentage, 2.68 GAA) when healthy.

He's a speedy rookie who had 18 points in 67 games in the regular season and hasn't left the lineup in the playoffs.

After 18 points in the regular season, he has just two in 16 games while being a scratch here and there for the Capitals.

A 2008 first-round pick, Sbisa profiles as a puck-moving, two-way defenseman. He never lived up to expectations in Vancouver, but he has been good in Vegas -- when healthy (he skated in only 30 regular-season games).

The Golden Knights paid a big price for Tatar at the deadline, then seldom used him (he was scratched for seven of Vegas' first 11 playoff games). There's no denying his talent -- it's just whether it will be showcased in Vegas.

The rookie defenseman is Orpik's partner and has one point in 17 playoff games, with a 45.2 Corsi for percentage in the playoffs.

The veteran evolved his game from enforcer -- he has not fought since being acquired by the Golden Knights at the trade deadline -- to just a gritty fourth-line forward. He adds value; just don't expect goals, like his Game 5 winner, too often.

A semi-regular in the Golden Knights' lineup this season -- and especially useful on the power play, with 12 power-play points in 45 games -- he's still waiting for his first playoff action this spring.

He hasn't played a ton (averaging 7:59 minutes per game in nine playoff appearances), and he is battling back from an injury. When he's on, he's a high-energy forward who plays a physical brand of hockey.

The speedy forward has been a bit of a disappointment since being selected from the New York Rangers' crop of exposed players. He tallied just 11 points in 63 regular-season games.

He had four points in 11 games during the regular season and has appeared in two playoff games.

Aussie, Aussie, Aussie! Oi! Oi! Oi! His first playoff game was Game 6 against the Penguins, and he set up a critical goal with his hustle.

The rookie appeared in two playoff games against the Penguins after playing three games in the regular season.

He played eight games in the regular season and averaged 8:50 per game. He played 12:12 in Game 6 against the Penguins, registering one shot on goal.

The former New Jersey Devil played only 34 regular-season games for the Knights and hasn't seen playoff action since the Sharks series. There are some things to like in his game, but he seems to be relegated back to the land of the healthy scratches.